120-year-old reaction turned on its head with environment-friendly, paste-based method

A new method for creating one of chemistry’s most widely used class of compounds could revolutionize industrial processes, making them cheaper, simpler and more environmentally friendly.

(Left) Reaction mixture of magnesium metal and organohalide after one hour of ball milling. Use of this material in subsequent reactions led to only a 6% yield of the desired product. (Right) Same process, but with a small amount of organic solvent also added at the beginning. Use of this paste form of Grignard reagent in subsequent reactions led to yields of up to 94% of the desired product (Photo: Koji Kubota).

A group of researchers led by scientists at Hokkaido University have developed a simpler, greener method for producing Grignard reagents—one of the most important and widely used type of reagents in the chemical industry—that drastically cuts down on the use of hazardous organic solvents and could lead to reduced production costs. This new process was reported in Nature Communications.

Grignard reagents are an essential ingredient in a common method for creating carbon-carbon bonds, the building blocks of organic molecules. These reagents were discovered 120 years ago, but due to their instability, the conventional production method still used today is carried out in toxic organic solvents and with no exposure to moisture and oxygen. This results in a complicated, delicate, and expensive process that produces environmentally hazardous waste.

Researchers sidestepped these problems by minimizing the amount of organic solvent used and by employing a mechanochemical technique called ball-milling to produce Grignard reagents. The reactants, magnesium metal and organohalides, were loaded into a metal chamber along with a stainless-steel ball. In a key step, a small amount of organic solvent—about one-tenth the amount used in conventional methods—was added to the solid reactants. The chamber was then spun for one hour, causing the ball to tumble around and slam into the solid-state reactants, helping them to mix thoroughly and react, forming a paste-like Grignard reagent. 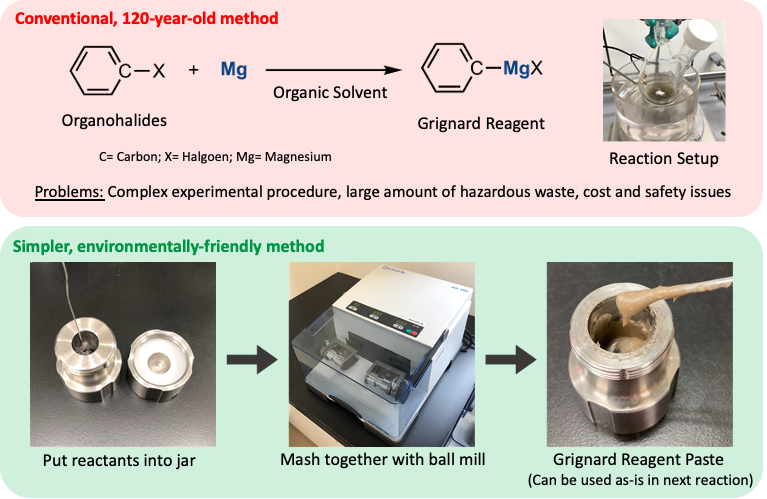 (Top Panel) Conventional method for synthesizing Grignard reagents by reacting magnesium and organohalides in organic solvents. This method has been used for 120 years. (Bottom Panel) New method for synthesizing Grignard reagents by mixing reactants in a ball mill with minimal organic solvent usage. This method can be used in ambient air to achieve a wide range of organic reactions with little to no solvent (Rina Takahashi, et al. Nature Communications. November 18, 2021).

Researchers even succeeded in creating new Grignard reagents using organohalides that have poor solubility in organic solvents, which can’t typically be made by the conventional method. Avoiding heavy use of organic solvents allowed the researchers to overcome solubility problems, which opens up a world of new reactions with Grignard reagents prepared from insoluble compounds. It also leads to a major reduction in hazardous waste.

Additionally, it is more difficult for water or oxygen to affect the Grignard reagents when less organic solvent is used. This means that removing water and oxygen from the surrounding air is not required, making the process easier to perform and less costly. Given the potential economic and environmental benefits, this discovery could have a huge effect on chemical industries.

“With a growing need to address environmental concerns and reduce CO2 emissions, it is important to develop chemical reactions that don’t require organic solvents,” commented Associate Professor Koji Kubota. “Grignard reagents are arguably the most well-known, commonly used reagents in industry, and so our work could fundamentally change the way a vast number of chemicals are produced at scale, leading to significantly reduced impact on the environment.”

Professor Hajime Ito (left) and Associate Professor Koji Kubota of the research team at Hokkaido University and the Institute for Chemical Reaction Design and Discovery (ICReDD). (Photos provided by ICReDD).

Development of a Simple Method for Preparing Luminescent Polymers

Mechanical Force as a New Way of Starting Chemical Reactions