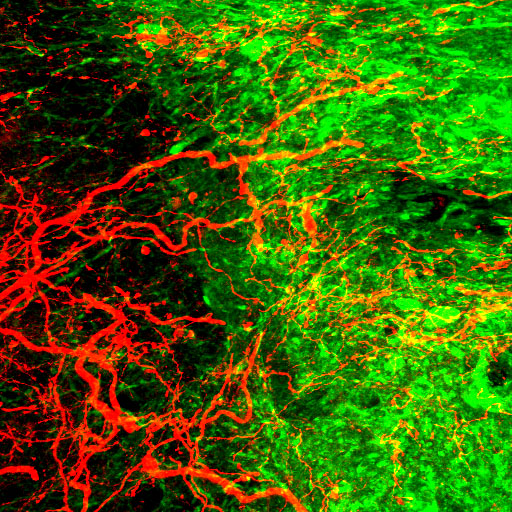 Stem cells have been used successfully, for the first time, to promote regeneration after injury to a specialized band of nerve fibres that are important for motor function.

Researchers from Hokkaido University in Japan together with an international team of scientists implanted specialized embryonic stem cells into the severed spinal cords of rats. The stem cells, called neural progenitor cells, were taken from rat embryos and directed to develop as spinal cord tissue. The implants, or “grafts”, promoted extensive regeneration of the severed nerve fibres, with the rats showing improvement in their ability to move their forelimbs. The team also used grafts of human neural stem cells in injured rats with similar results, demonstrating the potential of the success of this method across species.

The corticospinal tract (CST) is a band of nerve fibres that travels from the brain, through the brain stem and into the spinal cord. This structure is very important for motor function in humans. Injuries to the CST can result in paralysis. Much research has been done, with some progress, on using stem cells to regenerate other bands of nerve fibres in the spinal cord. But these have involved small gaps between the severed nerves in the presence of bands of bridging tissue. Lesions to nerve fibres located in the CST, however, and those involving large gaps and no bands of bridging tissue have proven largely resistant to regeneration.

The success of this current trial, reported in Nature Medicine, is promising for the future treatment of humans with severe spinal cord injuries. But much work remains to be done before it can be translated into clinical treatments. Further research is required to determine the best cell type to be used for grafting and for establishing safe grafting methods.