This is the last of an article based on an interview with Hokkaido University Professor Yukihiro Takahashi, Director of the Space Mission Center, about the university’s involvement in the development of low-cost, high-performance microsatellites. 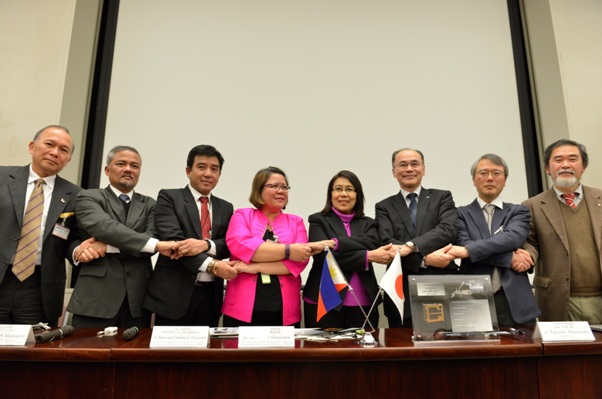 When two undersecretaries of the Philippine Department of Science and Technology (DOST) visited Hokkaido University in January 2014, they were deeply impressed by the idea of their future satellites gathering data to better protect Filipinos from the onslaught of typhoons, which sometimes cause thousands of deaths. 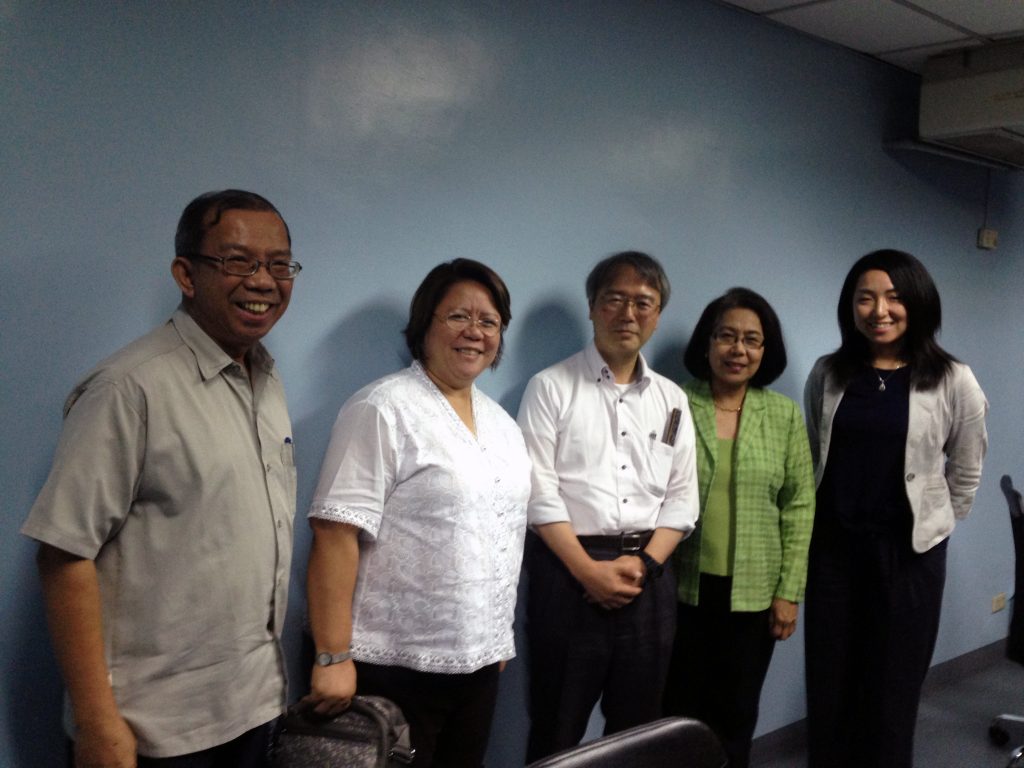 “Sharing a dream moves people’s hearts,” Prof. Takahashi said. “That’s why the two undersecretaries  decided that DOST should work toward their dream with us and build lasting cooperative relations with our team.”

One of the Philippines’ satellite-related priorities—in addition to gathering data for disaster monitoring—is to observe their homeland, including farming areas. Though coconut is one of the Philippines’ main agricultural products, the data on the distribution of coconut trees in the country is insufficient.

It was with this grand design in mind that Prof. Takahashi met the Secretary of DOST, Mario G. Montejo, in February 2013 to pitch his team’s microsatellite plans. “My main contribution to the project was as a persuader, explaining the superiority and effectiveness of our project to DOST officials, as well as to people at the University of the Philippines Diliman,” he explained. 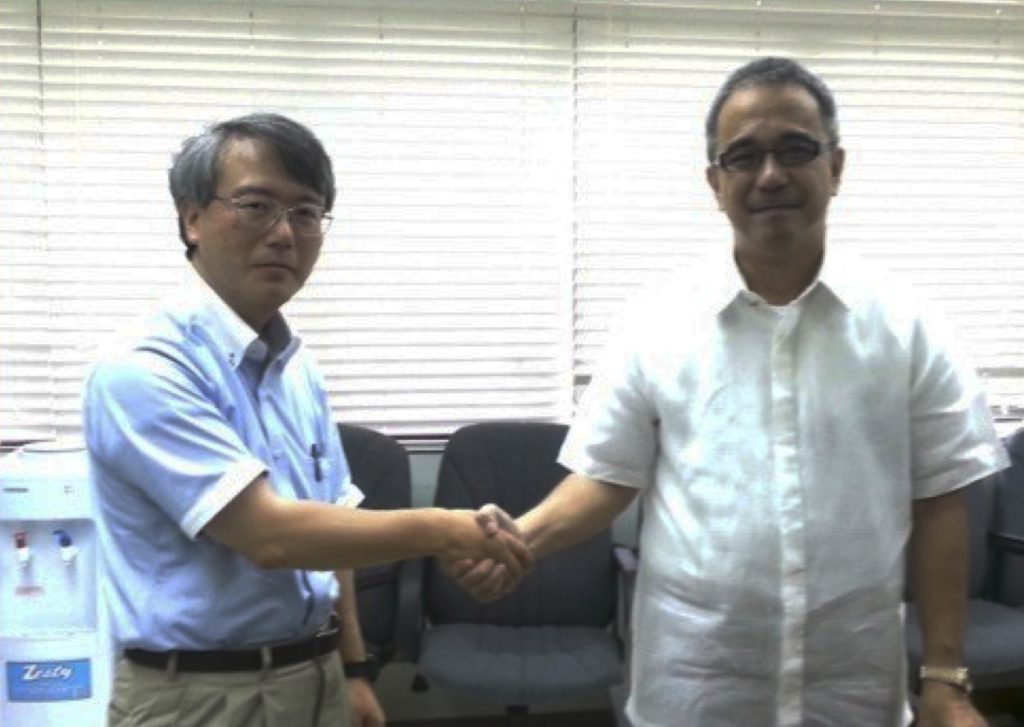 Prof. TAKAHASHI and Mr. Mario G. MONTEJO, the Secretary of DOST (Department Of Science and Technology), Republic of the Philippines. [copyright: Yukihiro TAKAHASHI]

At the time, Prof. Takahashi had no idea the Philippines was considering launching its own satellites. So when a Philippine official contacted him 18 weeks later in early July of 2013 asking for more information, he felt compelled to fly to the country—at his own expense—to talk directly with DOST officials, rather than merely interacting via email.

DIWATA-1 team at University of the Philippines, Diliman [copyright: Hokkaido and Tohoku Universities]

Prof. Takahashi is clearly a man of action: In addition to his role as a geophysicist, he is also a prime mover in a scheme aimed at launching 50 to 100 microsatellites through a consortium comprising a dozen Asian countries, including Japan, Philippines, Vietnam, Myanmar, Thai land, Mongolia, Malaysia, Indonesia, and Bangladesh.

The envisioned constellation of microsatellites will likely help these countries make better preparations to deal with large-scale natural disasters. Hokkaido University is preparing to propose a next-generation, disaster-prediction system that utilizes microsatellites. Prof. Takahashi would like the consortium of Asian nations to share satellite technologies, collected data and methods to use the data.

In addition to the aforementioned countries are also set to sign a memorandum of understanding to join the consortium. Hokkaido University will serve as the first secretariat of the association.

“We’d like the consortium to share crop-yield projections, for example,” Prof. Takahashi said. “In order to achieve that, it’s indispensable that we all use standardized sensors. Otherwise, the nations won’t be able to exchange satellite photos.”

An important challenge faced by the consortium is the joint verification of microsatellite data.

“It takes enormous effort on the ground to verify data,” Prof. Takahashi said. “For example, we have to physically visit a forest to check the location and number of many different kinds of trees to verify if the information derived from the satellite data are correct. It’s necessary to have experts from various fields—including agriculture, fisheries, and the environment—to create a systemic organization to conduct verification work.”

Prof. Takahashi said “it is of prime importance for Japan to disseminate its methods for gathering and using microsatellite data to other Asian countries, and eventually the rest of the world.” “If they’re part of the consortium, then each country will be using spectrum imagers with unified liquid crystal tunable filter (LCTF) specifications, and getting the latest version of LCTF,” Prof. Takahashi said. “If we create and sustain such a community in the world, it will make us much stronger.” 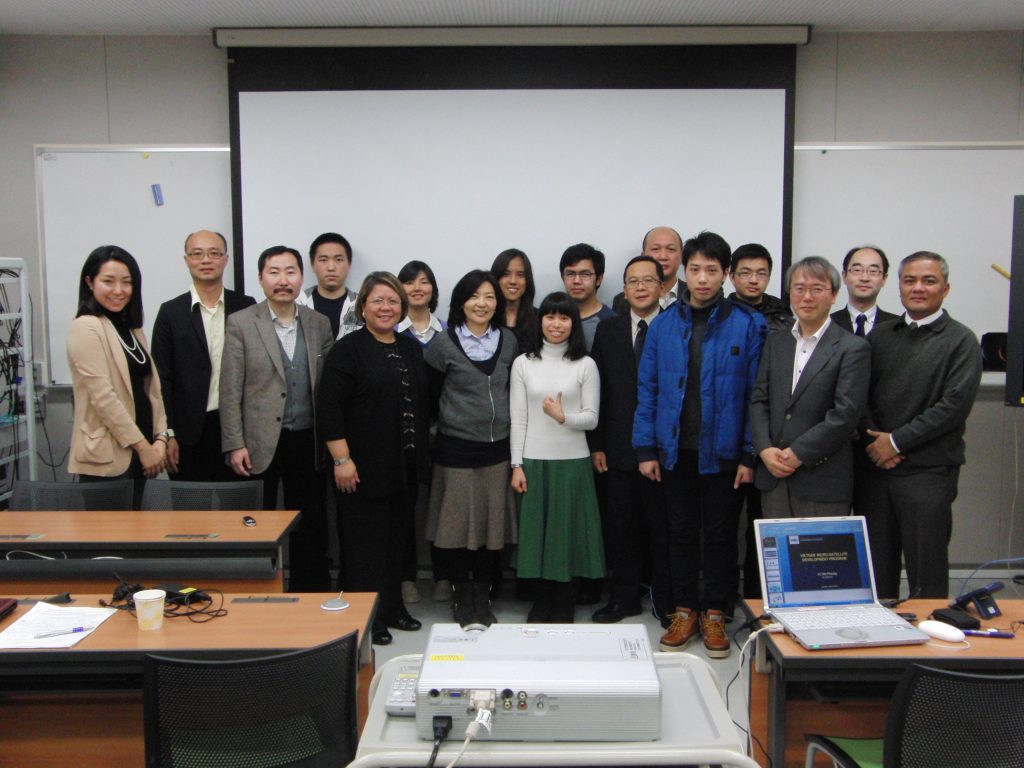 The Philippines hopes to develop DIWATA-2 with help from the Hokkaido-Tohoku team, and is eyeing to launch as soon as the fabrication of the satellite is completed.

In addition, RISESAT (Hodoyoshi-2) which was developed by Tohoku University, will be launched in the fiscal year 2018. In addition to spearheading the project, Hokkaido University is also involved in developing sensors for the satellite. To raise the necessary funds for the development, Prof. Takahashi again used his ingenuity to rally support—this time from academia at home and abroad—by opening the sensor development project to international tender. “I asked a professor of Taiwan’s National Central University to join the project, and I even accompanied him when he asked the university president for funding,” Prof. Takahashi said. Prof. Takahashi also turned to Hokkaido University’s agriculture and fisheries departments for their assistance and contribution to the project.

RISESAT’s sensors have a ground resolution of 5 meters and are capable of taking images at a world-besting 630 bands.

The Japan Aerospace Exploration Agency (JAXA) is to launch RISESAT free of charge, while Hokkaido and Tohoku universities will cover the costs for developing the bus and payload, and operating the satellite.

“I believe that, if we can spread our cutting-edge technologies to the world now, we can acquire strong competitiveness.” Prof. Takahashi said.