The junctions between nerve cells responsible for releasing and receiving dopamine in the brain are a surprising mismatch that gives this chemical a strong competitive advantage.

Neurons are cells that transmit nerve impulses. Dopamine neurons are the main source of the chemical dopamine in the central nervous system and are few in number compared to other types of neurons in the brain. They occupy an inner part of the brain, called the striatum, and play an important function in influencing emotions, motivation, voluntary movements and cognition. Dopamine deficiency is associated with a number of diseases including Parkinson’s disease, addiction and depression.

Dopamine neurons located in the midbrain form junctions, or “synapses”, on one of the main kinds of striatal neurons, called medium spiny neurons. In theory, dopamine molecules released from their neurons should be received on the other end of the synapse by the medium spiny neurons. However, the dopamine receptors on medium spiny neurons are found relatively far away from the synaptic sites. Thus it’s been unclear how dopaminergic transmission works.

Researchers at Hokkaido University in Japan studied the molecular and anatomical composition of dopamine synapses in adult mice. They “tagged” molecules known to be expressed by these synapses, allowing them to visualize how they are expressed and how they localize.

By doing this, they found that one side of the dopamine synapse, unsurprisingly, is “dopaminergic”, producing chemicals that are essential for dopamine release. The other side of the synapse, however, was surprisingly found to be “GABAergic”. GABA is a chemical that exerts an inhibitory effect on neurons. GABA deficiency leads to hyperexcitability of neurons, such as is the case in epilepsy. This was the first time for researchers to discover this kind of a mismatch present on either side of dopaminergic synapses.

Further investigation led the team to find that the protein neuroligin-2 played an important role in the dopamine synapse. When they cancelled-out its function in mice brains, the density of dopamine synapses on medium spiny neurons decreased while the density of GABAergic synapses increased. This suggests that neuroligin-2, which is expressed by the GABAergic side of the synapse, works as an anchor that stabilizes the mismatched junction, giving a competitive advantage to dopaminergic synapses over GABAergic synapses. 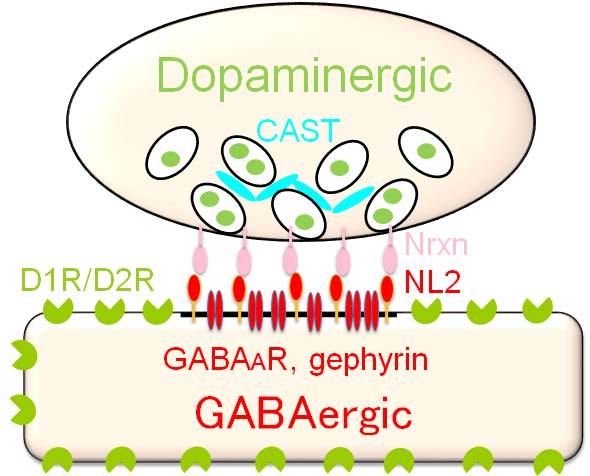 This work was supported by Brain Mapping by Integrated Neurotechnologies for Disease Studies Project, Ministry of Education, Culture, Sports, Science and Technology and Japan Agency for Medical Research and Development.

Uchigashima M. et al., Dopamine synapse is a neuroligin-2-mediated contact between dopaminergic presynaptic and GABAergic postsynaptic structures, Proceedings of the National Academy of Sciences of the United States of America,  Mar 25, 2016.
doi: 10.1073/pnas.1514074113