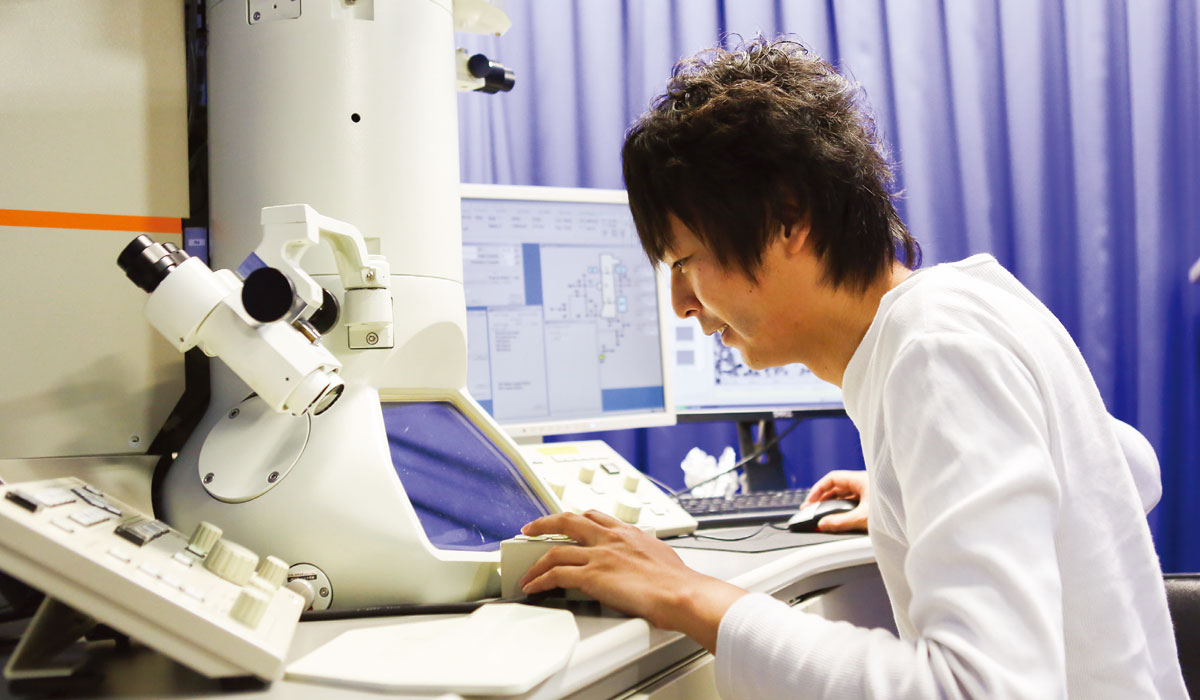 Takayuki Nonoyama was asked to conduct research on a hydrogel that adheres to bones in 2013, right after he took up the position of specially appointed assistant professor at Hokkaido University’s Laboratory of Soft and Wet Matter Science.

The person who gave him this research topic was Professor Kazunori Yasuda, an orthopedic surgeon at Hokkaido University Hospital, who has extensively researched the application of double network (DN) gel as artificial cartilage. As Japan’s population grays, the number of people suffering knee pain due to cartilage abrasion or loss is rising, and one in five middle-aged and elderly people in Japan have osteoarthritis.

DN gels are tough yet soft and flexible, and their low sliding friction on solids makes them promising as materials for artificial cartilage. Yasuda’s long-cherished goal is to develop a gel capable of bonding to bones so the gel can be fixed at the knee joint to function as cartilage, which does not regenerate spontaneously in vivo when damaged. One stumbling block was that DN gels usually have poor adhesion to solids because their main component is water – accounting for more than 90 percent of a gel’s weight in some cases.

However, Nonoyama, a young scientist who as a graduate student had researched inorganic compounds rich in biominerals, such as vertebrata bones and mollusk shells, immediately had an idea that could solve this problem. “I suggested coating the DN gel’s surface with hydroxyapatite, which is the major inorganic component of bone,” Nonoyama said.

Nonoyama might not have realized the magnitude of his proposal at that time, but the idea eventually led to a breakthrough that surprised many of his bosses and colleagues: the development of a hydrogel that strongly bonds to bones by inducing spontaneous bone formation in the gel’s surface layer.

Putting an idea into practice

Nonoyama and other researchers selected a DN gel consisting of poly(2-acrylamido-2methyl propane- sulfonic acid) as the brittle first network and poly(N,N-dimethylacryl- amide) as the ductile second network.

But merely coating hydroxyapatite (HAp) on the DN gel would not be enough to strongly bond the gel with bones, so the gel likely would not stay fixed in the knee joint. Soft supporting tissues in the human body, such as cartilage and ligaments, are firmly attached to bones. To address this problem, Nonoyama alternately dipped the DN gel in solutions of calcium chloride and dipotassium hydrogen phosphate to obtain an HAp/DN gel. These ionized components of HAp could permeate the DN gel’s surface while crystalline HAp could not. 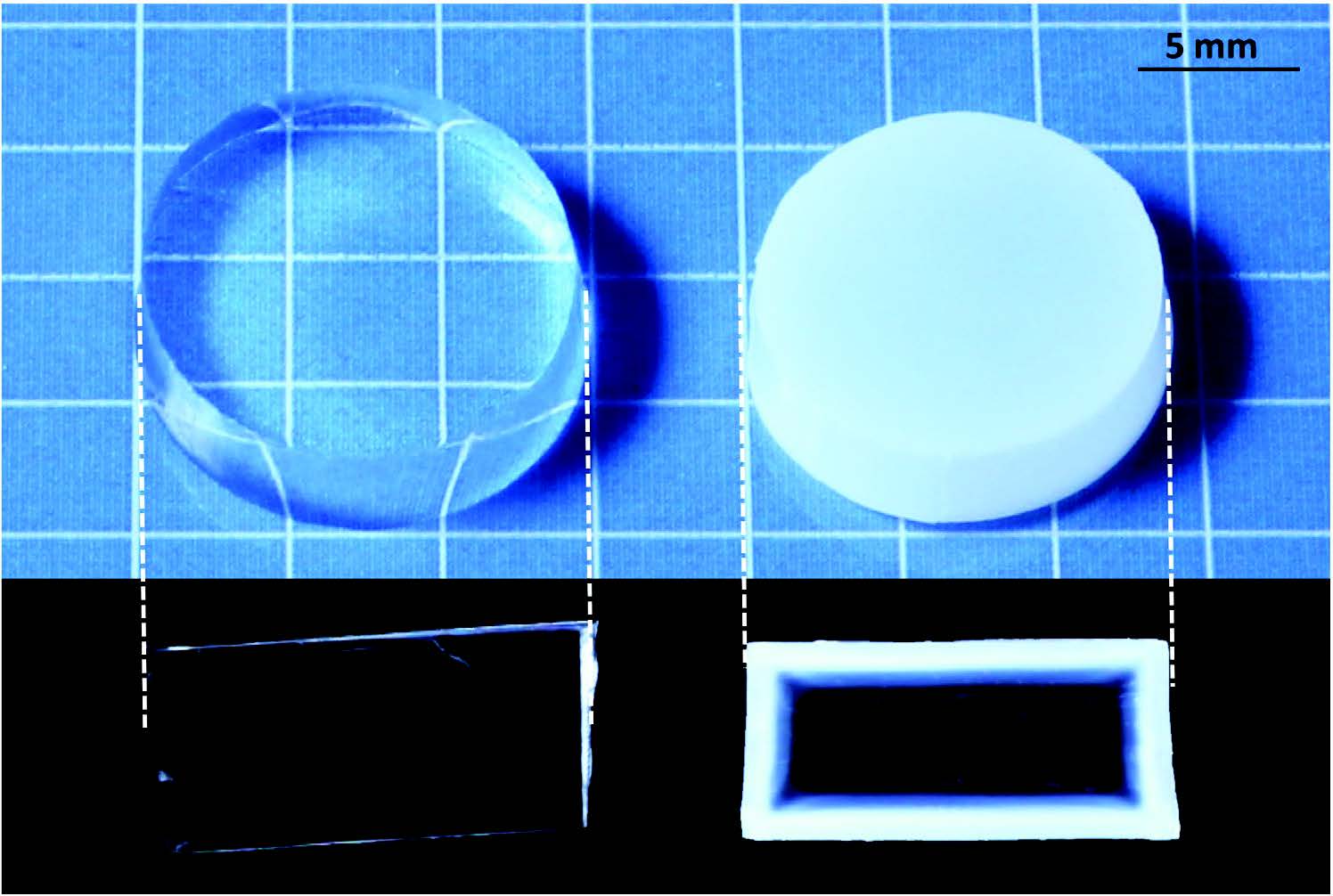 The team conducted in vivo experiments to verify the HAp/DN gel’s performance. The gel and uncoated gel were transplanted into defected bones in rabbits. Four weeks later, the team observed the HAp-coated gel had bonded very strongly to the bones, while the uncoated gel had not bonded at all. Observations by transmission electron microscopy into the gel’s surface layer revealed the newly formed bone component in the defected area had penetrated into the surface layer, connecting the bone and the gel seamlessly.

“It was quite surprising that osteogenesis penetrated into the HAp/DN gel region,” Nonoyama said. 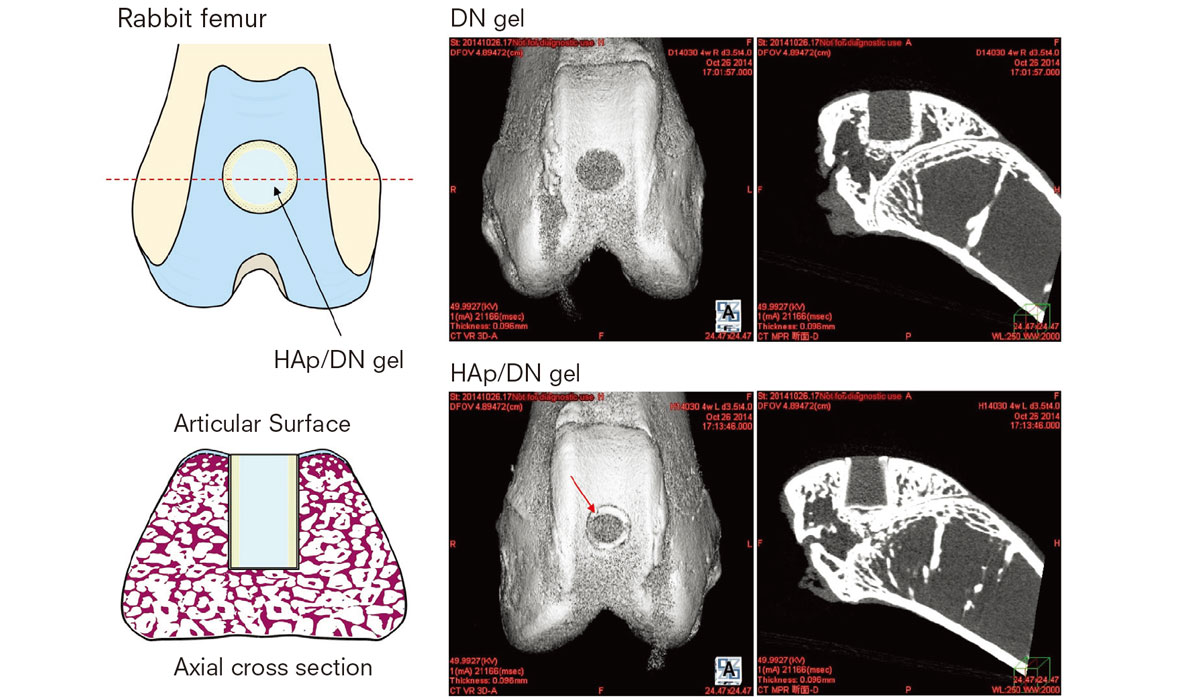 This represented the first time a bone had been robustly fused with a tough hydrogel, a breakthrough toward the potential application of such hydrogels as substitutes of soft supporting tissues. The team is in a tie-up with a company to conduct joint research to put the gel into practical use as a cartilage substitute.

“Originally, we thought adhering bones to the gel surface would have been a great achievement,” Yasuda said. “But we did more than that. HAp formed nanocrystals inside the gel, which then bonded with collagen and calcium to form bones. It is spontaneous bone formation. I was astonished by this finding.”

“We need to further improve the gel before actually using it in a patient. For instance, we must make sure the gel will not degrade for several decades after being implanted in the body,” Nonoyama said, adding durability and safety remain major challenges to be overcome before the gels are put into practical use.

In the long run, Nonoyama hopes to utilize a DN gel as a scaffolding-like material to induce bone regeneration.

“Having experienced bone fractures twice myself, I know how burdensome it is to undergo surgery to fix a broken bone with a metal pin and go through another to retrieve it,” Nonoyama said.

“A hydrogel scaffold must gradually biodegrade as bone regenerates so the patient won’t need the second surgery. I am convinced we will be able to do this with DN gels in the future.” 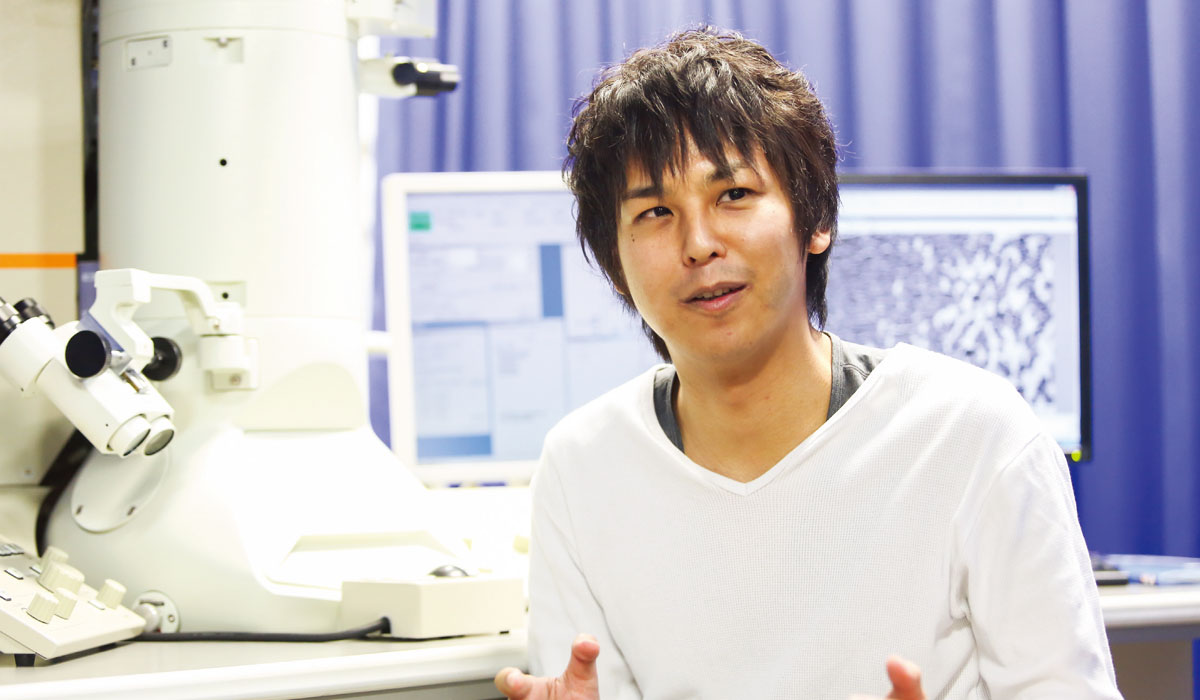