A new model explains that water evaporating from the Arctic Ocean due to a warming climate is transported south and can lead to increased snowfall in northern Eurasia in late autumn and early winter. This information will allow for more accurate predictions of severe weather events. 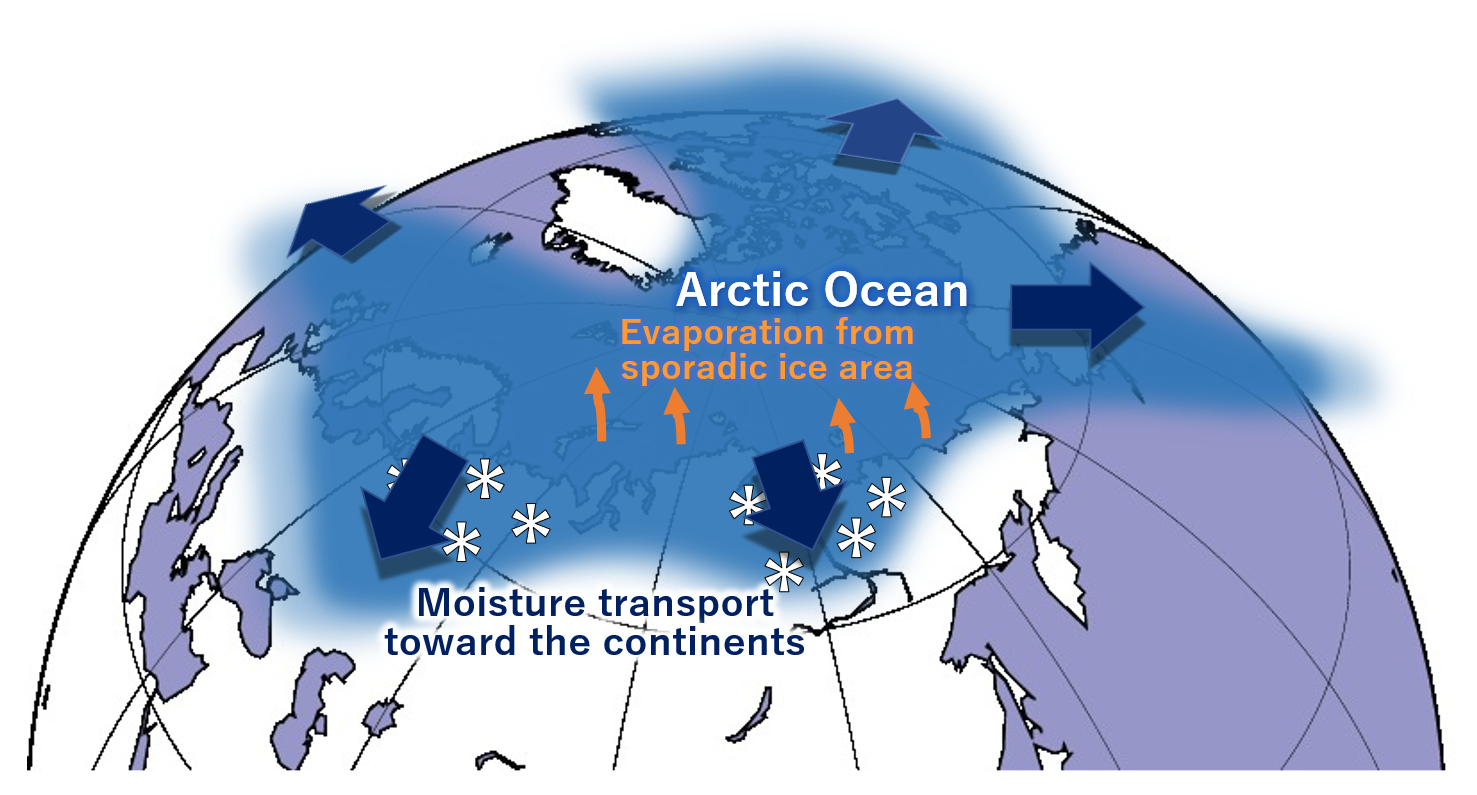 An increasingly warm and ice-free Arctic Ocean has, in recent decades, led to more moisture in higher latitudes. This moisture is transported south by cyclonic weather systems where it precipitates as snow, influencing the global hydrological cycle and many terrestrial systems that depend on it (Illustration: Tomonori Sato).

Rising air temperatures due to global warming melt glaciers and polar ice caps. Seemingly paradoxically, snow cover in some areas in northern Eurasia has increased over the past decades. However, snow is a form of water; global warming increases the quantity of moisture in the atmosphere, and thus the quantity and likelihood of rain and snow. Understanding where exactly the moisture comes from, how it is produced and how it is transported south is relevant for better predictions of extreme weather and the evolution of the climate.

Hokkaido University environmental scientist Tomonori Sato and his team developed a new tagged moisture transport model that relies on the “Japanese 55-year reanalysis dataset”, a painstaking reanalysis of world-wide historical weather data over the span of the past 55 years. The group used this material to keep their model calibrated over much longer distances than hitherto possible and were thus able to shed light onto the mechanism of the moisture transport in particular over the vast landmasses of Siberia.

A standard technique to analyse moisture transport is the “tagged moisture transport model”. This is a computer modelling technique that tracks where hypothetical chunks of atmospheric moisture form, how they are moved around, and where they precipitate due to the local climatic conditions. But the computer models become more and more inaccurate as the distance to the ocean increases. In particular, this makes quantitative predictions difficult. Thus, these methods have not been able to satisfyingly explain the snowfall in northern Eurasia.

The results of the study, published in the journal npj Climate and Atmospheric Science show that water evaporation from the Arctic Ocean has increased over the past four decades, and that the biggest changes have occurred from the Barents and Kara Seas north of western Siberia, as well as over the Chukchi and East Siberian Seas north of eastern Siberia, between October and December. At this time of year, the Arctic Ocean is still warm and the area not covered by ice is still large. Importantly, this development coincides with the area where sea ice retreat has been strongest over the time frame of the study. In addition, the quantitative model shows that evaporation and snowfall are especially strong during certain weather events such as cyclonic systems taking up unusually large quantities of moisture and transporting them south into Siberia, thus also highlighting detailed and specific mechanistic insights into the weather dynamics of the region.

With the Arctic Ocean being twice as sensitive to rapid warming than the global average, evaporation and subsequent changes to the hydrological cycle over northern Eurasia will become even more pronounced in the years to come. The researchers say that, since snowfall often delays the downstream effects of the abnormal weather events that cause it, “knowledge of the precursor signal stored as a snow cover anomaly is expected to help improve seasonal predictions of abnormal weather, e.g., the potential for heatwaves that enhance the risk of fire in boreal forests.” This study therefore yields a key element to understanding the mechanism of this weather system as well as others that are influenced by it, and thus to making better predictions of severe events that could do harm to people and infrastructure.

This study was supported by the Japan Society for the Promotion of Science KAKENHI (JP19H05668); the Arctic Challenge for Sustainability II (ArCSII) project (JPMXD1420318865); and the Japan Science and Technology Agency (JST) SICORP (JPMJSC1902).