Archaeology of indigenous people: Reading stories buried in the Earth

Influenced by his father, who was a history teacher, Professor Hirofumi Kato of the Center for Ainu and Indigenous Studies developed a keen interest in Ainu culture as a boy. So it was natural for him to pursue archaeology with a focus on Yubari in Hokkaido where he is from, east Africa and Siberia when he was in graduate school to find the answer to one of the field’s biggest questions: Why did humans who originated in Africa spread to the Arctic region, creating a history of their own? 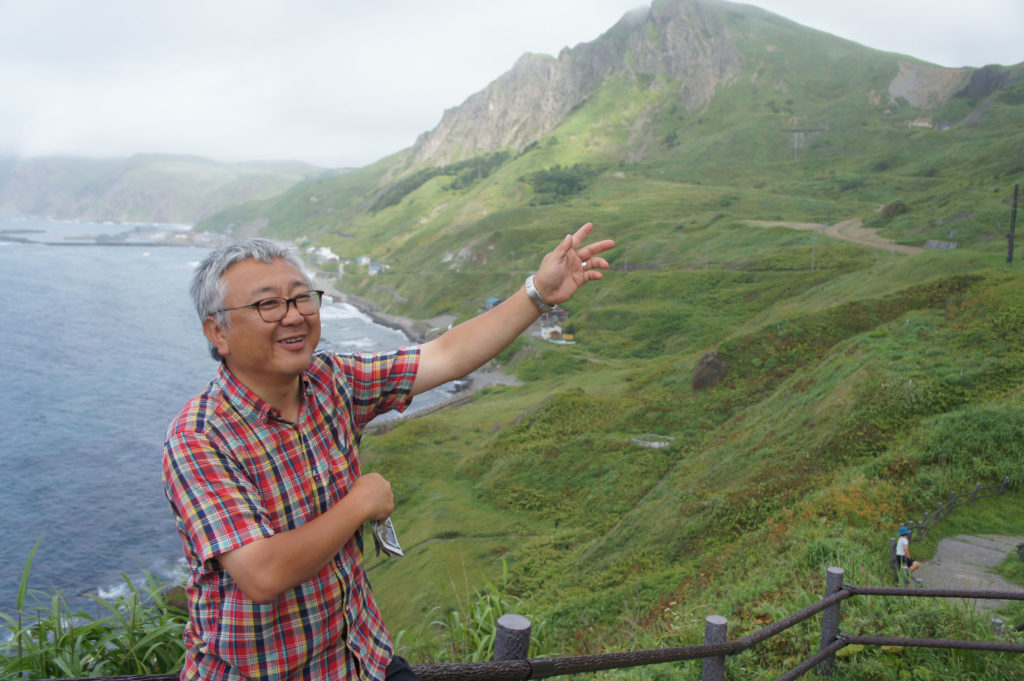 Professor Hirofumi Kato at Rebun Island during the summer school.

“Because Hokkaido’s climate was unsuitable for rice farming, people engaged in hunting, fishing and gathering for a very long time,” Kato said. “This led to post-Jomon culture (around the 3rd century B.C.E to 7th century C.E.), Satsumon culture (7th century to 13th century) and then to Ainu culture. Okhotsk culture, a unique culture of maritime people, flourished on the Sea of Okhotsk coast about 1,000 years ago.

“History textbooks students use in Hokkaido mainly describe the history of Honshu (Japan’s main island) and barely mention Hokkaido. Consequently, Hokkaido residents have little knowledge about their local history. Okhotsk culture is a historical aspect of Hokkaido that many of us are unaware of. Hokkaido has many interesting historical tales that remain untold.”

To remedy this, Hokkaido University runs an international field school through the Hokkaido Summer Institute, carrying out excavations for a few weeks on Rebun Island, Japan’s northernmost islet off Hokkaido. Every summer since 2011, students and researchers from many countries and regions, including Russia, Canada, France, South Korea and Taiwan, have joined the program. The Hamanaka 2 archaeological site on the island is rare in that researchers can see remnants of ancient people’s daily lives spanning about 4,000 years — from the late Jomon Period to the Ainu Culture Period in the early modern era. Remains from these periods are concentrated in a geological layer only about three meters thick. The island’s cool climate and the sand stratum containing fractured shells — leaving it rich in calcium — have prevented organic artifacts from decaying, making it possible to observe the diet of ancient people who lived there from the bones of fish and domesticated animals which have been excavated together with earthenware and stone tools. 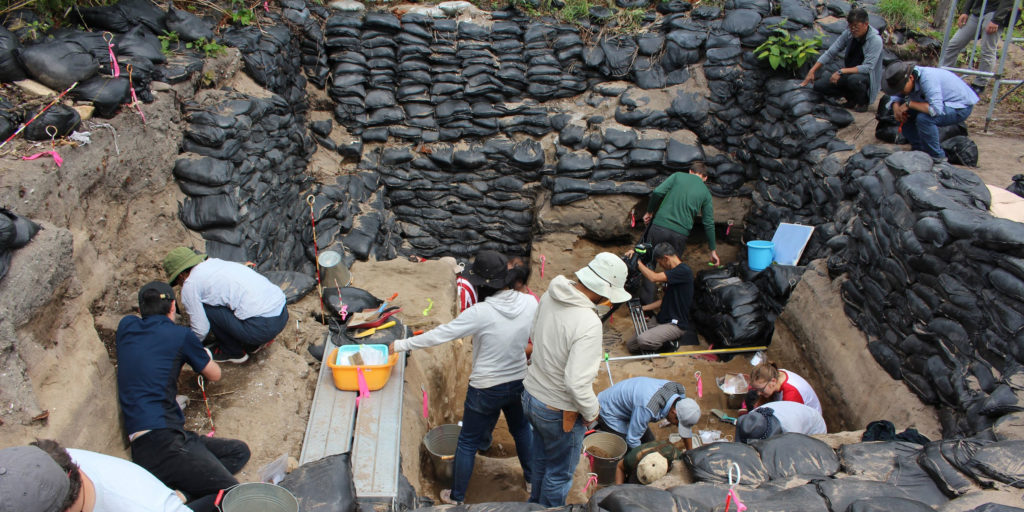 About 4,000 years of history are buried in a three-meter-thick geological layer.

Kato is also friends with various artists, including those working on indigenous art. Noriyuki Sawa, a puppet theater performer who now lives in the Czech Republic, is one such artist. Sawa visits the Hamanaka 2 site, which he calls a “miracle garden,” every summer. 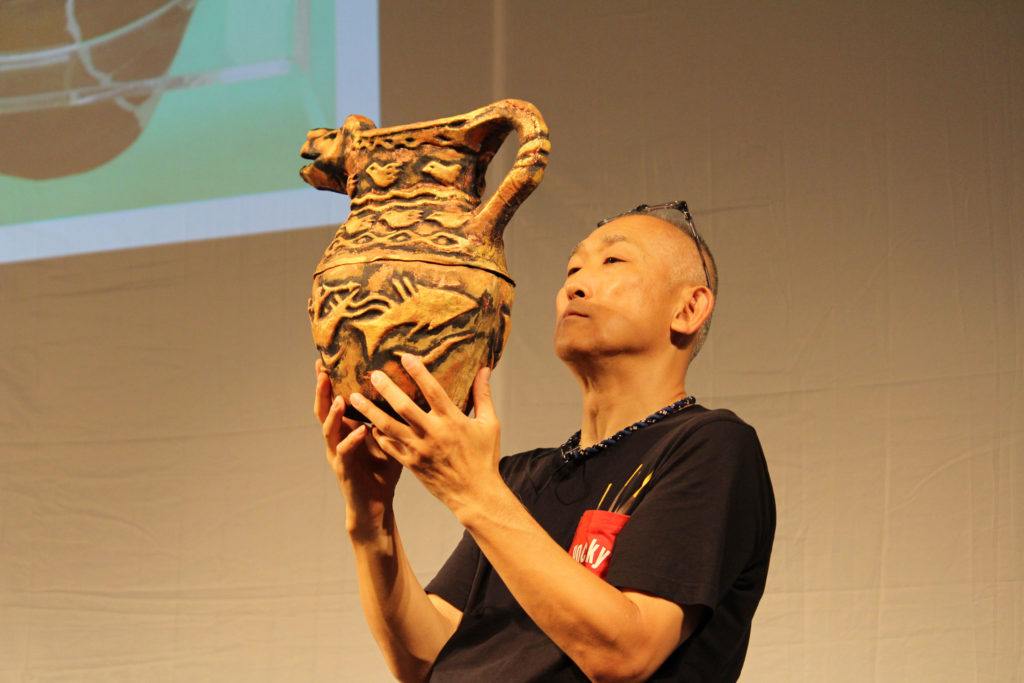 Noriyuki Sawa introduces the stage props used in the show.

Sawa produced a puppet show called “Okhotsk — Owari no Rakuen” (Okhotsk — Paradise at the End) that was set in the Okhotsk culture period. In August 2018, he performed the show in Sapporo as one of Hokkaido University’s educational programs.

The play was created based on Kato’s expertise and brought to life by Sawa’s artistry. It featured props such as special ancient harpoon and Ohkotsk earthernware. “An artistic rendition of archaeological research results generates a kind of dynamic we never see in exhibits or books, and fans inspiration that goes beyond conventional thinking by archaeologists,” Kato said during a public discussion with Sawa following the puppet show.

Sawa was initially criticized for giving a leadership role to a woman in the play’s hunting and battle scenes. Some archaeologists say it was unthinkable for a woman to do these things from an academic viewpoint. However, since the tomb of an adult woman buried with hunting tools was excavated at the Hamanaka 2 site in 2017, hinting at the presence of female leaders or hunters in Ohkotsk culture, this gave the stamp of “ex-post facto approval” to Sawa’s show. 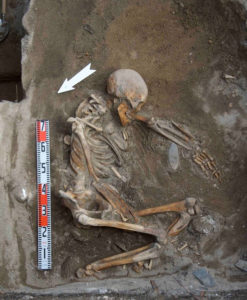 The woman buried with hunting tools could have been a leader 1,500 years ago.

“Gleaning historical information from excavated materials, which do not ‘speak about themselves,’ solely by archaeologists has its limits,” Kato said. “It is essential, therefore, to let your imagination run wild with the given information to picture how ancient people lived. If you can’t craft a hypothesis by revving up your imagination, you could miss an interesting discovery sitting right in front of you.” Sawa agreed. “Without imaginative ideas, the field of archaeology probably will die a slow death,” he said. 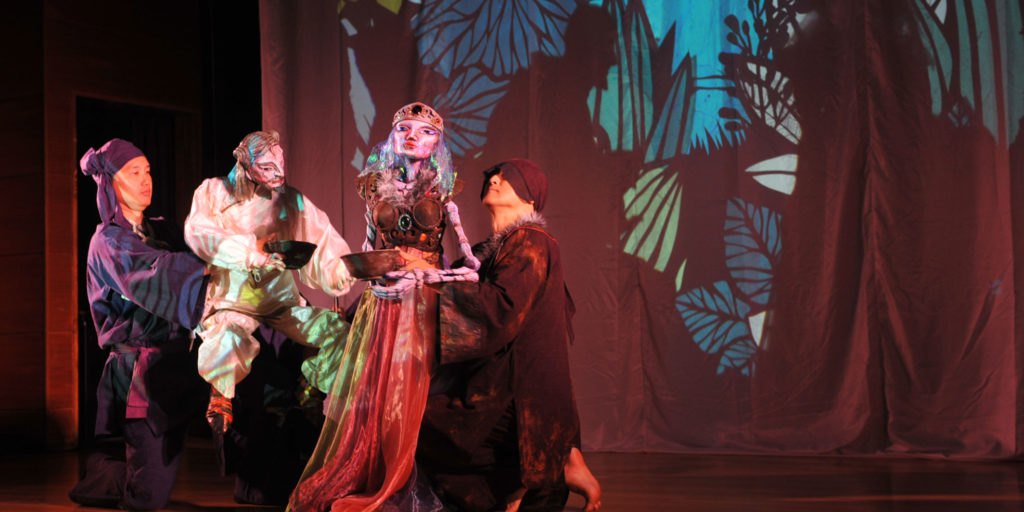 The gala opening of “Kiseki no niwa – Jikanto no himitsu” (Miracle garden – Secret of time island), the puppet show Sawa produced based on the Hamanaka 2 site, was held in February 2019 and could be a harbinger of lasting collaboration between the archaeologist and puppet theater performer.