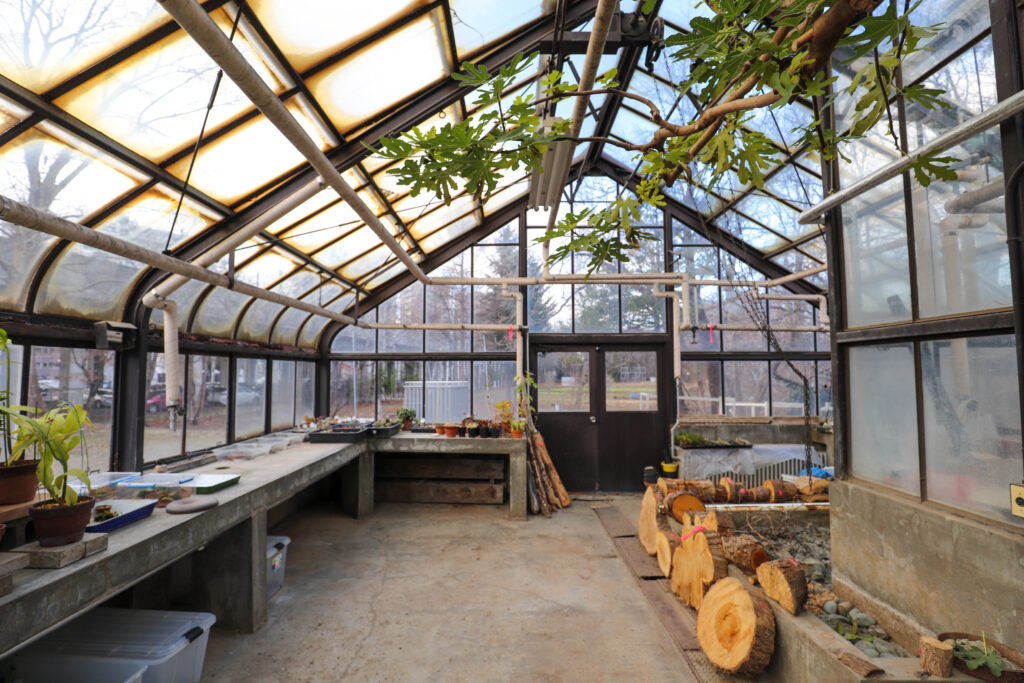 An old greenhouse used as the base for Ano Greenhouse.

The vast campus, rich in nature.

Research and educational activities in a variety of fields ranging from humanities and social sciences to natural sciences.

There is an old greenhouse on the premises of the nursery of the Sapporo Experimental Forest along Ishiyama-dori Avenue near Soen Station. In September 2020, a new art project using this greenhouse as a field was launched. The project was initiated by Hyunjung Park, a Specially Appointed Lecturer at the Communication in Science & Technology Education & Research Program (CoSTEP), Center for Open Education, Institute for the Advancement of Higher Education.

Specially Appointed Lecturer Park conducts research and education on communication in art and science, and also works extensively as a contemporary art artist. CoSTEP’s Communicators in Science and Technology Education Program offers practical classes in which students consider how to understand and express science and technology through art. The art project, Ano Greenhouse, was launched after Dr. Park met Tadakazu Hayashi, a technical specialist at the Field Science Center for Northern Biosphere, who participated in the program and introduced the greenhouse to her. It was love at first sight when she saw the building and its surroundings, including the unique structure built in the 1970s, the trees around it, and the overpass leading there. “I was attracted to the building itself, with its skylights that could be opened and closed by pulleys with chains, and its R curve, which was fashionable at the time. I was also very attracted to the idea of planning how to preserve the former research field in the present,” Dr. Park says.

Memories of That Bridge

Ano Greenhouse’s goal is the exchange of people’s experiences and knowledge beyond the boundaries between the university and the community, science and art, and other areas through activities such as the creation of artworks centered on the greenhouse and its surrounding environment. Various projects are conducted with a focus on bio-art, using plants and other natural and scientific subjects. 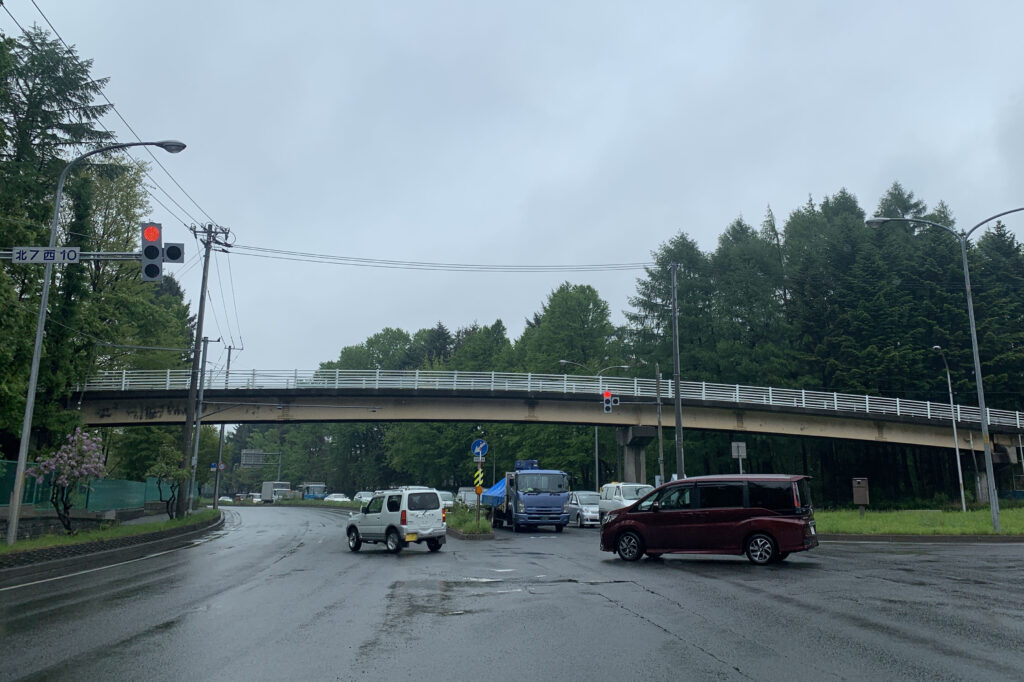 The overpass connecting the Sapporo campus. Nearly 50 years after its construction, it was removed in October 2021 because it no longer complied with current structural standards.

One of the projects, “Farewell, That Bridge,” is about an overpass spanning Ishiyama-dori Avenue. This overpass was built to connect the campus and the experimental forest, which were divided by Ishiyama-dori Avenue when it was constructed to host the 1972 Sapporo Winter Olympics, and was used by those conducting field research in the forest and residents of the adjacent staff quarters. It is a concrete bridge where a single car can pass, and where people and vehicles were seen passing on the busy Ishiyamadori Avenue. Dr. Park says she will never forget the feeling of crossing the bridge. The scenery changed as you entered the bridge from behind the School of Agriculture and around each of the several curves. In some spots, you could see cars passing by on Ishiyama-dori Avenue below, and in others, you passed through dense trees. After the last sharp turn with various views, you would arrive at the greenhouse. She was attracted to this unusual space where one could have a little adventure in a landscape that is known only to a few people on campus. With the removal of the bridge due to aging, this project is seeking memories of the bridge and preserving them for posterity.

Exchange of people, space, and knowledge centered on art

As many as 320 trees were cut down for construction and road maintenance associated with the removal of the overpass. In Ano Greenhouse, various initiatives are being undertaken to make effective use of the logged timber. One such initiative is a collaborative project with Tree in Sapporo, Chair in Hokkaido, an exhibition event of the Sapporo Association of Woodworkers (SAW), a group of woodworkers and designers in Hokkaido. Twelve original chairs were completed using ginkgo wood, which is not usually used for such purposes. In addition to the creation and exhibition of the chairs, the project also included a dialogue between the creators and researchers mainly from the University. Sharing ideas about wood and chairs from different perspectives brought about new insights. “I don’t want this dialogue to be a conclusion, but rather a beginning of something new,” says Dr. Park, who coordinated the dialogue. She looks forward to the unexpected developments that are sure to arise from such interactions. 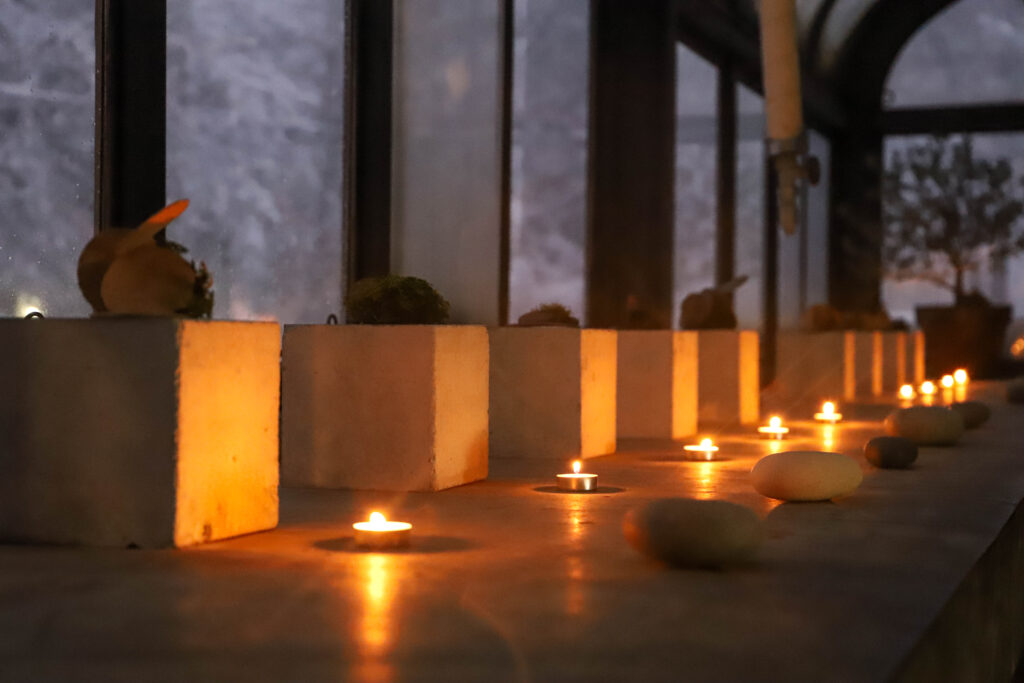 Breath of Moss, an exhibition event held in the greenhouse in December 2021 to consider the place of plants. A collaboration between ceramic artist Ikuno Abe and Specially Appointed Lecturer Park. The exhibition features moss from the University’s Tomakomai Experimental Forest and sound-making pottery in the shape of stones.

The logged wood is also used as a material for wood smoking. Together with RITARU COFFEE, a cafe in Sapporo, she developed a smoked coffee called Anotoki (lit. That Time) using the wood to smoke the beans. “I’d like to continue to consider not only the effective use of logged wood but also ways to deal with nature on campus and how to make the best use of it,” says Dr. Park with enthusiasm. 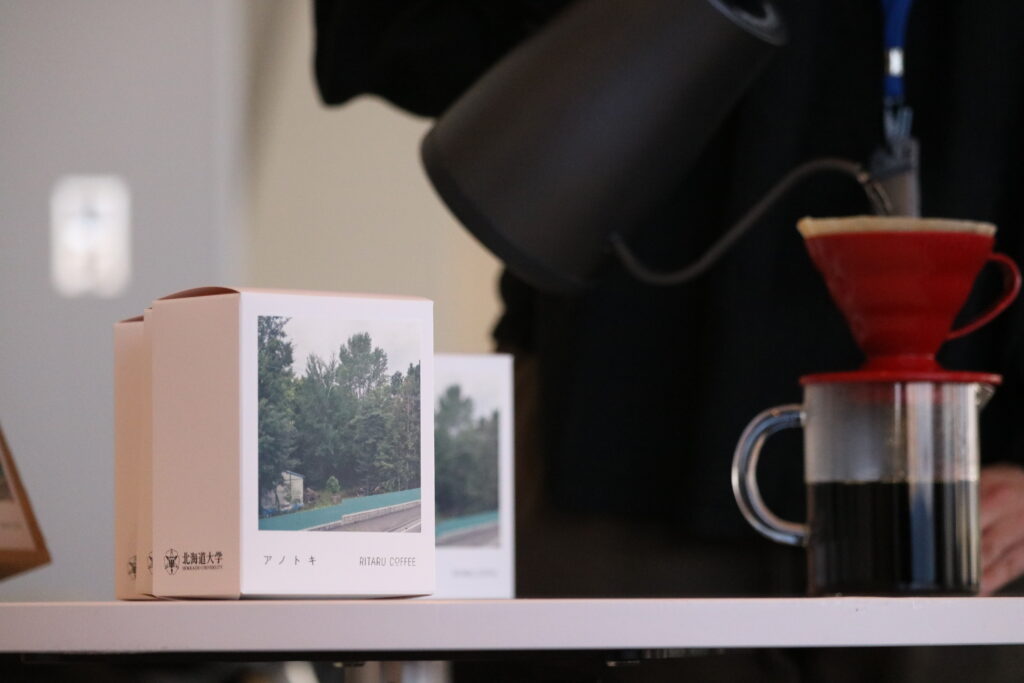 Smoked coffee “Anotoki,” available for sale to the public from February 2022 and at the University’s Information Center, “Elm Forest.”

Although there were some difficulties in the process of implementing the project at the University, which was unfamiliar with contemporary art practices, the project has moved forward with the cooperation of the Field Science Center for Northern Biosphere, which manages the greenhouse, and other related departments and organizations. Dr. Park has come to be known as “Ms. Park of Ano Greenhouse” among contemporary art professionals in the Sapporo area.

Ano Greenhouse has installed art at the University and is creating new value for the University’s resources. Further activities are expected in the future.