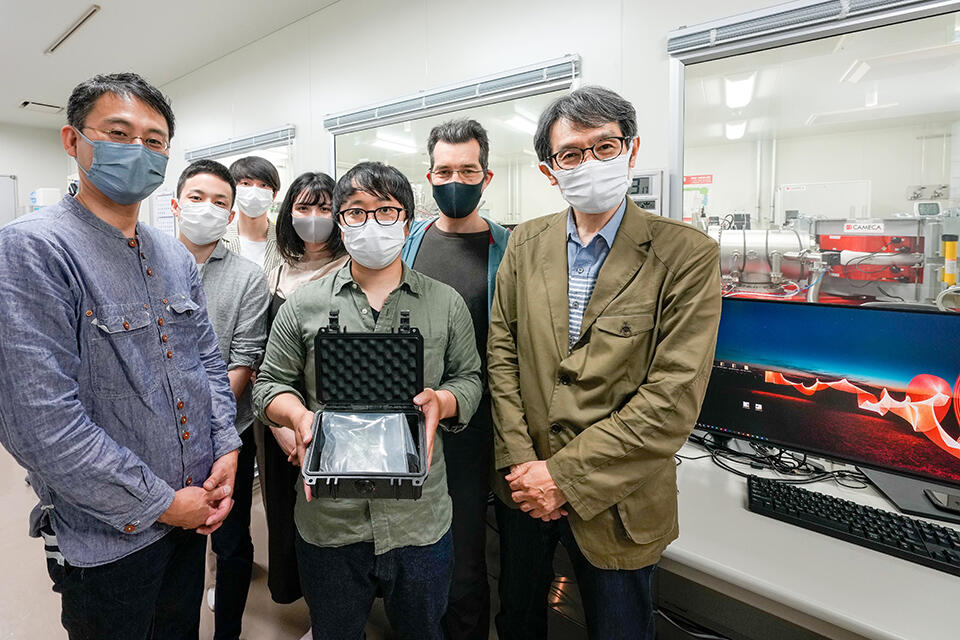 Professor Shogo Tachibana (far left), Professor Hisayoshi Yurimoto (far right), and the members of Yurimoto’s laboratory with the Ryugu samples. The isotope microscope can be seen in the background, behind the glass windows.

On December 12, 2020, the Hayabusa2 explorer probe returned to earth, bringing samples of the Ryugu asteroid. After that, it was taken to the Japan Aerospace Exploration Agency (JAXA) to undergo “curation” work in which each particle of the samples was sorted out, identified, and catalogued. Now that the initial stage of curation work has been concluded, the sample distributions have begun to the preliminary analysis teams.

Born 4.6 billion years ago, withstanding the tectonic forces and heat, Ryugu is believed to have recorded the memory of the solar system in its infantile period. Abundant with carbon, the asteroid is classified as a C-type asteroid, from which it is expected that we can find organic materials and water that are essential components of life on earth. Over the next one year, the preliminary analysis teams aim to uncover the mysteries surrounding the formation/birth of the ocean and life, as well as the origin and evolution of the solar system. In addition to the chemical analysis by Yurimoto’s team, these valuable samples will also be analyzed by different teams from the perspectives of the coarse grain compositions, fine grain compositions, volatile compounds, solid organic components, and soluble organic components. 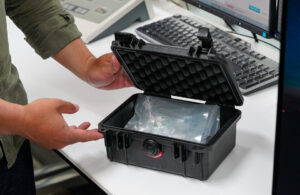 Ryugu samples were packed and carried in a sealed pack of nitrogen gas to avoid contamination by the earth’s atmosphere. 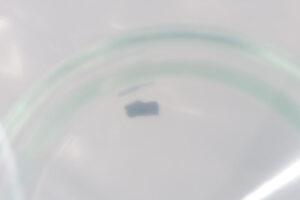 The chemical analysis team will analyze the samples using the isotope microscope which has been developed at Yurimoto’s laboratory for over 30 years. In their research activities, this device captures the images of the fine distribution of elements’ isotopes from meteorite and asteroid samples. Isotopes are the same elements with different atomic weights. By analyzing the isotope ratios, they can learn about the age and origin of components/substances/material.

The isotope ratio of objects in the solar system are almost identical, except for decayed isotopes from the radioisotopes, light elements (e.g. hydrogen, oxygen), and noble gases. It is thought that this is because the objects were exposed to an extremely high temperature before formations of asteroids and planets, thus homogenizing the isotope ratio. Yurimoto’s laboratory has been contributing to the investigation of the planets and the solar system’s origins; such as discovering that meteorite has grains with an isotope ratio which is different from that of other substances in the solar system, thus suggesting that the grains were formed before the formation of sun (presolar grains).

Yurimoto is full of hope about the research on Ryugu samples. “Hokkaido University’s isotope microscopes have two unique characteristics. One is the capability to visualize isotope distributions. Substances with novel isotope ratio in the Ryugu sample could be visualized right away, if there is any. The other is the precision in analyzing isotopes. For instance, perhaps we could find out when Ryugu was formed as an astronomical object.” 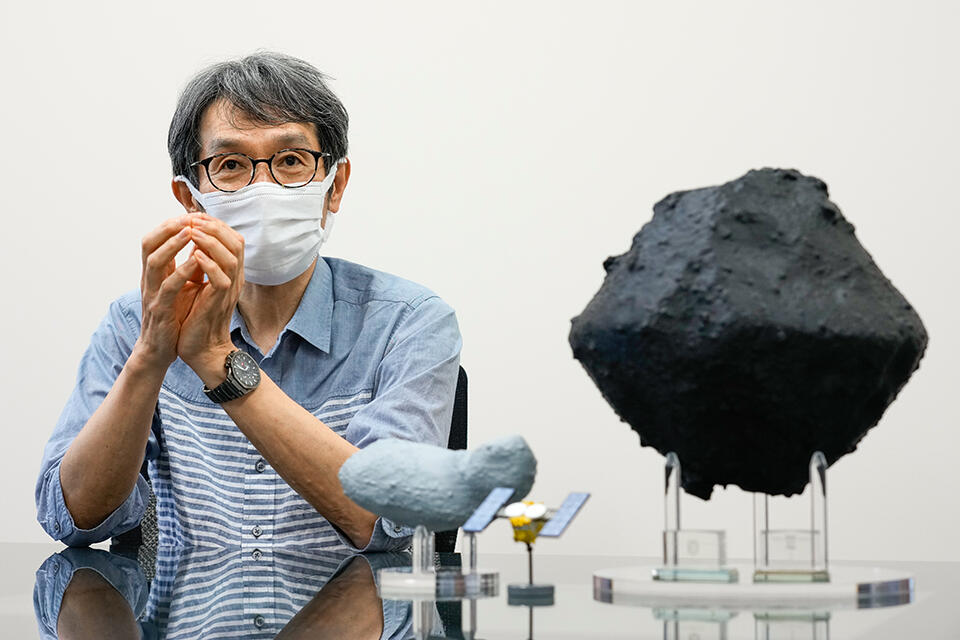 Professor Hisayoshi Yurimoto, the leader of the chemical preliminary analysis team for the Hayabusa2 project.

“This special isotope microscope which will be used to observe the isotope ratio cannot be found anywhere else in the world; it only exists in Hokkaido University. Professor Yurimoto has previously made many discoveries; and, since we are now dealing with an unknown sample, I hope we can once again discover something novel,” said Tachibana, who will be supervising the preliminary analyses.

Tachibana also added, “Weight-wise, the Ryugu sample all-combined is the largest sample of astronomical objects ever brought back to Earth second only to  samples of Earth’s moon. Learning even from the various preparations and the analyses results, we hope that we can obtain much new knowledge that will help plan future sample-return missions.” 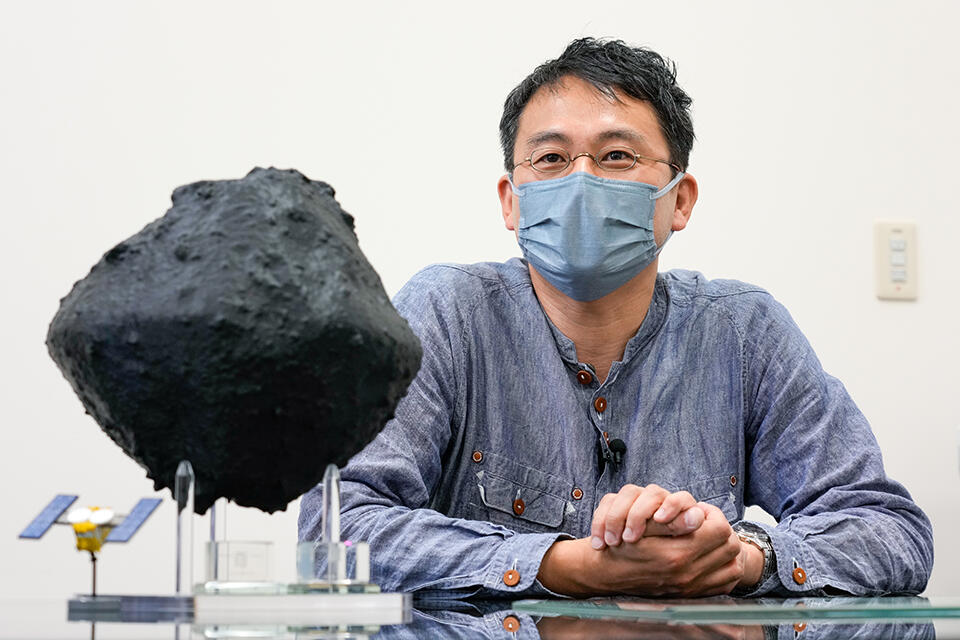 Supervisor for the entire preliminary analysis team of Hayabusa2 Project, Professor Tachibana of University of Tokyo.

Yurimoto is enthusiastic about this preliminary analysis. “The treasure chest has just been opened. From now on, we will inspect its content down to every nook and cranny. Please look forward to anything that we will discover as we shall present them to everyone,” said Yurimoto.

If the Ryugu sample contains any substance retaining presolar memory or a new substance that has never before been identified, only the isotope microscope of Hokkaido University can capture the images. The expectations are truly high. The scientific result of the study is projected to be presented around March 2022. 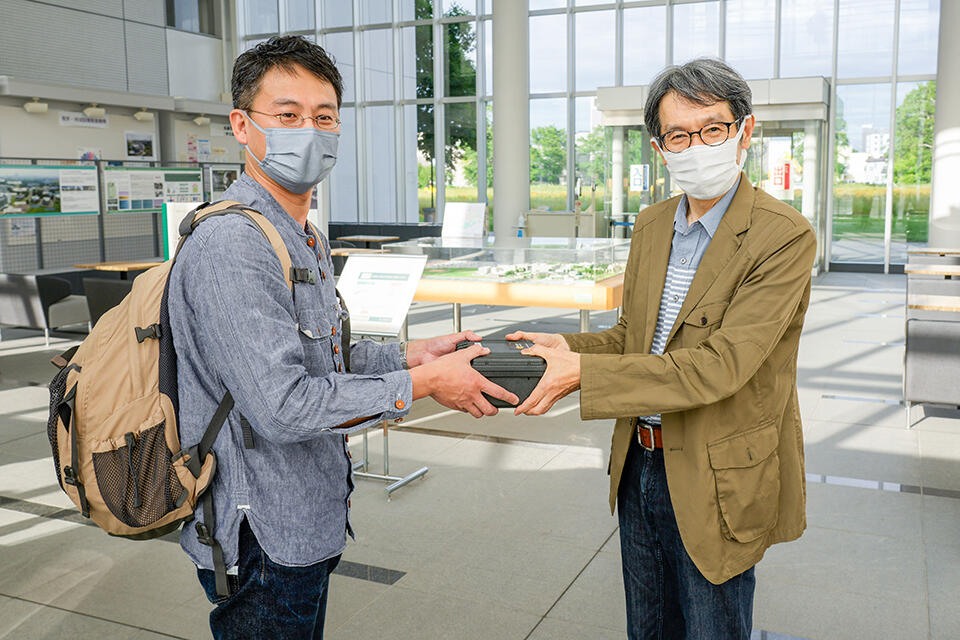 The original Japanese article can be found here.