Chronobiology: Focusing on the biological clock for improving human health 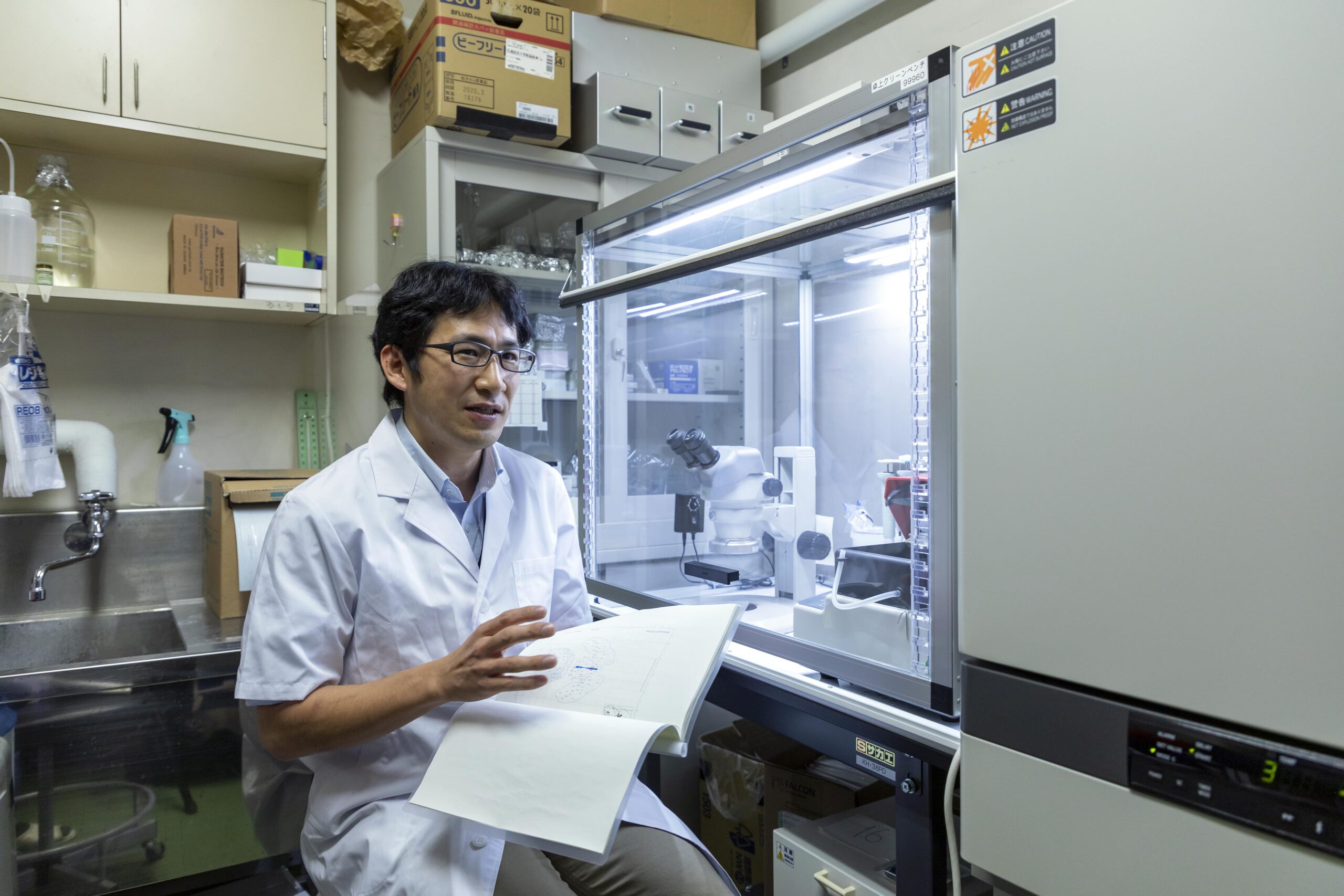 Circadian rhythms are approximately 24-h fluctuations in physiology, behavior (sleep-wake cycle), and physical performance. The biological clock located in the suprachiasmatic nucleus of the hypothalamus is the central circadian pacemaker and plays a crucial role in generating the circadian rhythm. The circadian pacemaker entrains to an environmental light-dark cycle caused by the Earth’s rotation period of 24 h and regulates the internal temporal order of physiological function. As a result, we can be active during the daytime and sleep well during the night. Associate Professor Yujiro Yamanaka of the Faculty of Education specializes in chronobiology, which deals with the biological clock, and he has been pursuing comprehensive research on the effect of the biological clock on mental and physical health.

“When I was in high school, I had a goal of becoming a physical education teacher,” says Associate Professor Yamanaka. After graduating from Nihon University Senior High School in Kanagawa Prefecture, he entered the Department of Sport and Physical Education, Kokushikan University. He had the opportunity to attend a lecture on exercise physiology, after which he started research under Professor Tsuyoshi Watanabe of the Department of Exercise Physiology. Associate Professor Yamanaka’s graduation thesis was on “Effect of psychological satisfaction from mountain climbing exercise on diurnal variations in autonomic nervous activity in healthy elderly persons.” In cooperation with friends of his mother who loved mountain climbing, he compared the diurnal variation of cardiac autonomic nervous activity on normal days to that on days when they went mountain climbing. The parasympathetic nervous activity during nocturnal sleep was found to be greater on days when they went mountain climbing than on normal days. “Although I wasn’t aware that the research was addressing circadian rhythm, the measurements in a 24-hour cycle might have been connected with my current research,” says Associate Professor Yamanaka. Although he obtained the teaching certificate for health and physical education, he entered the master’s course of the Graduate School of Education, University of Yamanashi, in the hope of continuing research on autonomic nervous system, which he had become interested in when writing his graduation thesis. He conducted research to create a normal value (diagnostic criteria) for assessing the cardiovascular autonomic function response to postural change together with Dr. Koichi Honma of the Department of Neurology, Chiba Cerebral and Cardiovascular Center. After presenting his first scientific article paper in English, seeing how his research results were reflected in clinical practice and feeling the difficulties and joys of research, his goal changed from teaching to research.

“As I thought I should do something different from others to survive in the academic world as a researcher, I looked into research on chronobiology,” says Associate Professor Yamanaka. He focused his attention on the relationship between exercise and the biological clock, which was not yet fully understood in those days. As he learned that pioneering research in this field was conducted at Hokkaido University, he decided to enter the doctoral course of the university’s Graduate School of Medicine. He began to conduct isolation experiments in humans under Professor Ken-ichi Honma of the Chronophysiology Laboratory, Department of Physiology (formerly the Department of Physiology I) in 2004. Concurrently with research to clarify the structure of the human biological clock and the mechanism involved in phase-adjustment of human circadian rhythm by light and exercise, he also conducted animal experiments to clarify the brain mechanism of photic and non-photic entrainment in humans, which was difficult to study in humans, and he acquired his doctoral degree (medicine) in 2008. Since then, Associate Professor Yamanaka has continued his research as a staff member of the Chronophysiology Laboratory. And since becoming an associate professor in the Graduate School of Education and establishing the Laboratory of Life and Health Sciences in 2016, he has been conducting research from broad perspectives, with a main focus on the biological clock and circadian rhythm.

Toward the social implementation of research results 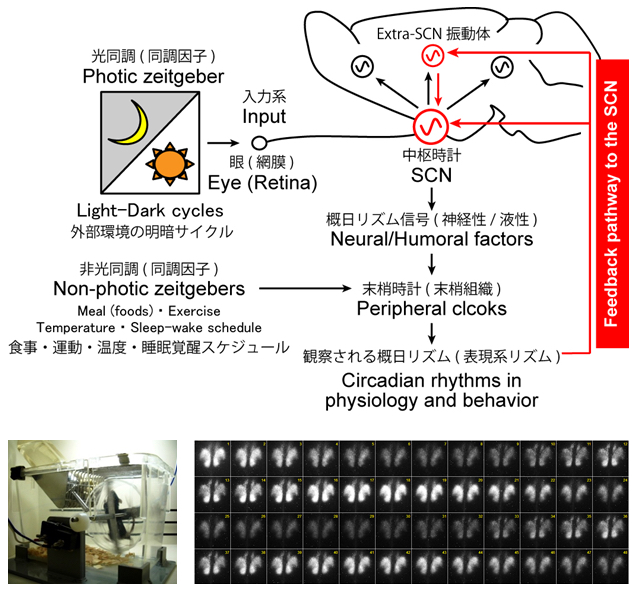 A hierarchical multi-oscillator system, which is controlled by a self-sustained circadian pacemaker, generates and regulates the circadian rhythm. Associate Professor Yamanaka has been investigating the effect of daily scheduled wheel-running exercise on circadian rhythm of behavior and clock gene expression in the SCN in mice.

A major research finding of Associate Professor Yamanaka is his elucidation of the non-photic entrainment mechanism of the human biological clock. Concerning the human biological rhythm, a two-oscillator model has been proposed. The model consists of a central clock (the primary oscillator) that controls the core body temperature and melatonin plus a peripheral clock (the secondary slave oscillator) that controls the sleep-wake cycle. However, which oscillator is affected by exercise has remained unclarified for many years. Associate Professor Yamanaka found out in the isolation facility kept under the dim light condition that habitual exercise acts as a zeitgeber (synchronizer) for the secondary oscillator, which mainly controls the sleep-wake cycle, and that there is a feedback pathway in which exercise secondarily affects the central clock via the oscillator that controls the sleep-wake cycle. He also conducted isolation experiments based on these results and found that the combination of timed exercise under bright light accelerates the re-entrainment of circadian rhythm to a large shift of sleep schedule, which will help overcome jet-lag sleep disorders when one travels internationally. Based on this scientific evidence, Associate Professor Yamanaka has been supporting the Japan national football team by providing a strategy for overcoming jet lag. 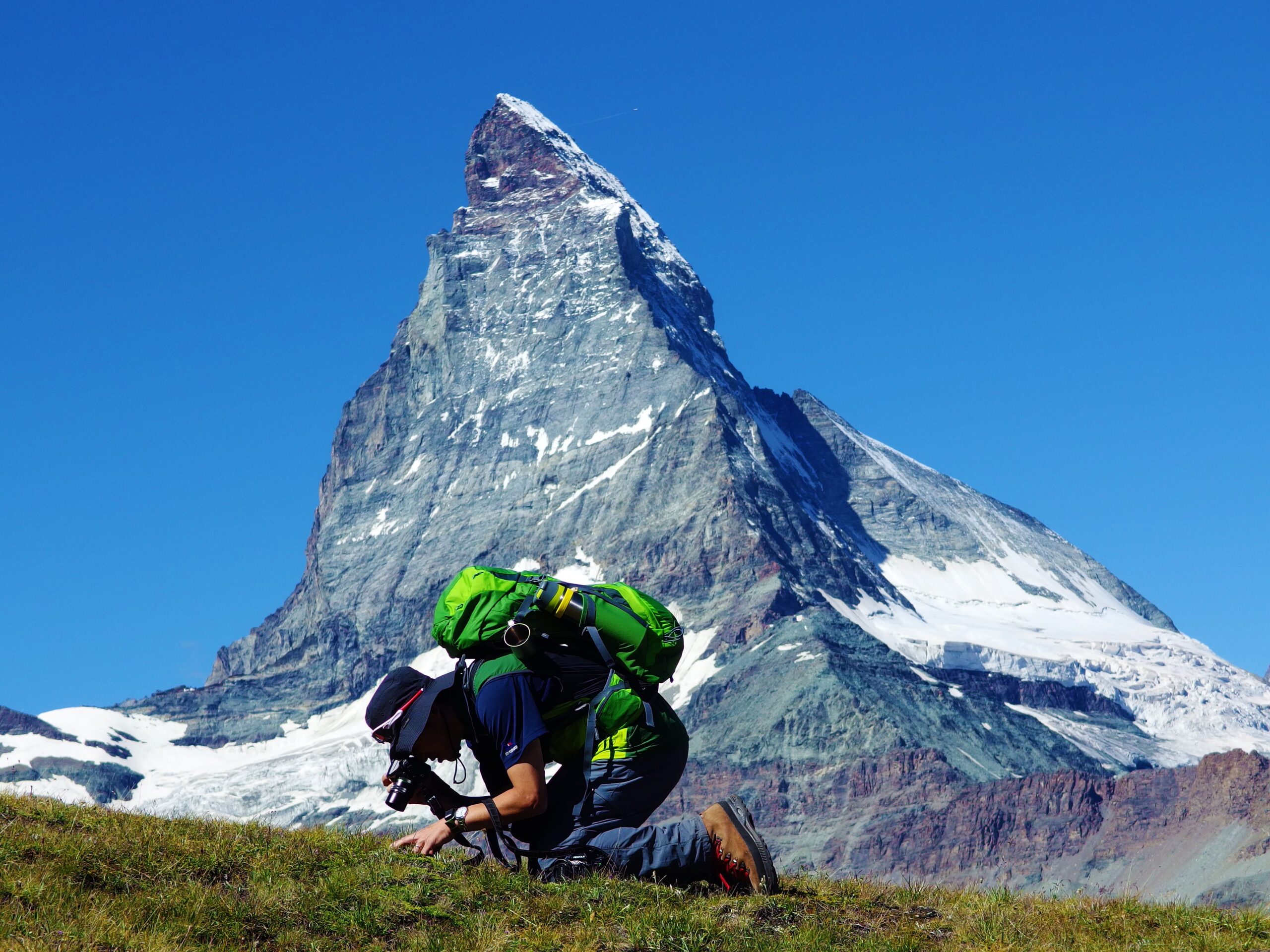 Mountain climbing for a change! Associate Professor Yamanaka has enjoyed mountain climbing since early childhood. He works hard on research every day, looking forward to those days when he can climb with his family while enjoying the flowers and scenery. The photo was taken in front of the Matterhorn (Switzerland).