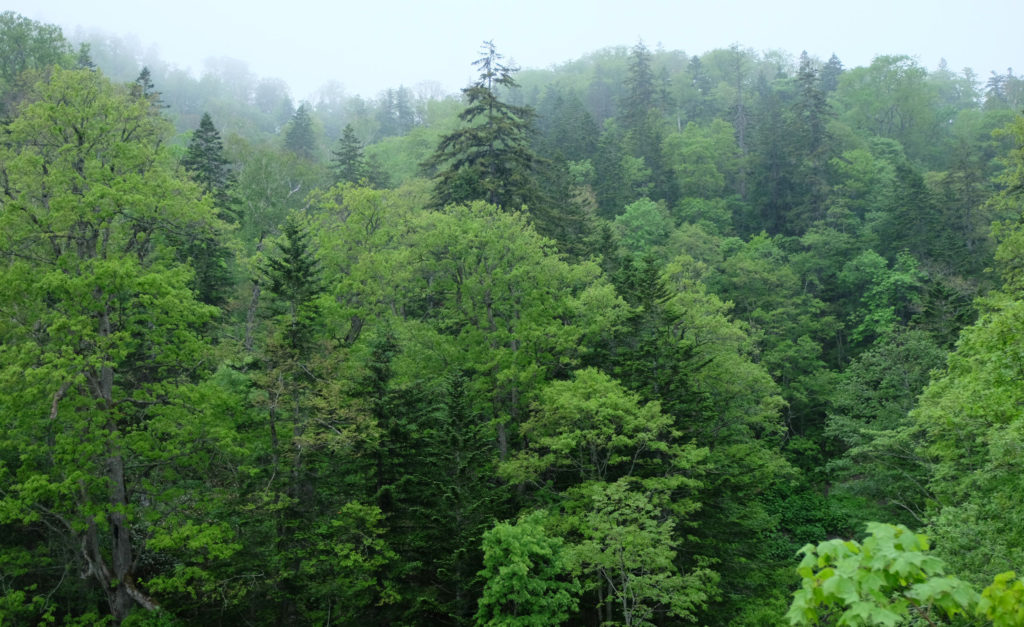 The rise in temperature and precipitation levels in summer in northern Japan has negatively affected the growth of conifers and resulted in their gradual decline, according to a 38-year-long study in which mixed forests of conifers and broad-leaved trees were monitored by a team of researchers from Hokkaido University.

The findings demonstrate how climate change has changed the forests’ demography and caused a directional change in the region, from being sub-boreal conifer-dominated to cool-temperate broad-leaved tree dominated.

Climate change as evidenced by, for example, an increase in the number of downpours and super typhoons, is impacting our daily lives. Forest ecosystems around the world are not exempt from this, but there are many issues to still clarify, such as species-specific responses to climate change and their mechanisms.

The present study published in Forest Economy and Management is only one among several studies conducted based on a long-term monitoring of data. The researchers investigated more than eight thousand individual trees in 17.5-hectare primeval reserve areas (Osashima and Panke) inside Hokkaido University’s Nakagawa Experimental Forest situated in Hokkaido in northern Japan from 1979 to 2016. The team monitored their growth rates, mortality and recruitment (the process by which seeds establish themselves in an area and grow into mature individuals) rates and then analyzed the influence by climate change. 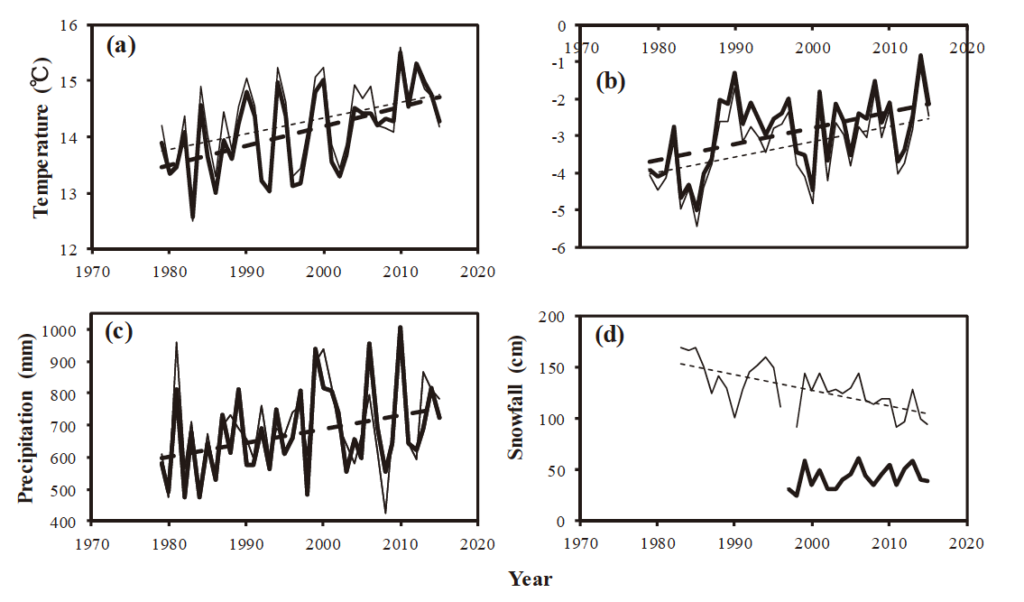 Climate change in northern Hokkaido over 38 years. The temperatures rose by 1° C in summer (a) and by 1.5° C in winter (b) over the last 38 years. The summer precipitation increased by 160 mm (c) over the 38 years, while the winter snowfall decreased by 60 cm (d). The fine line and broad line indicate temperatures in the village of Otoineppu and the town of Nakagawa respectively. (Hiura T., et al., Forest Ecology and Management, July 22, 2019)

According to the study, the rise in temperature and precipitation levels has negatively affected the growth of three coniferous species, Abies sachalinensis, Picea glehnii, and Picea jezoensis, over the years while positively affecting broad-leaved trees such as Magnolia obovata. Furthermore, the mortality of large conifers was strongly affected by a powerful typhoon in 2004. Due to these factors, the ratio of conifers in the Osashima primeval reserve area has decreased by nearly 20 percent from 55 percent. Tsutomu Hiura of the research team warns, “If climate change accelerates, these primeval mixed forests are likely to become broad-leaved tree forests in the future.” 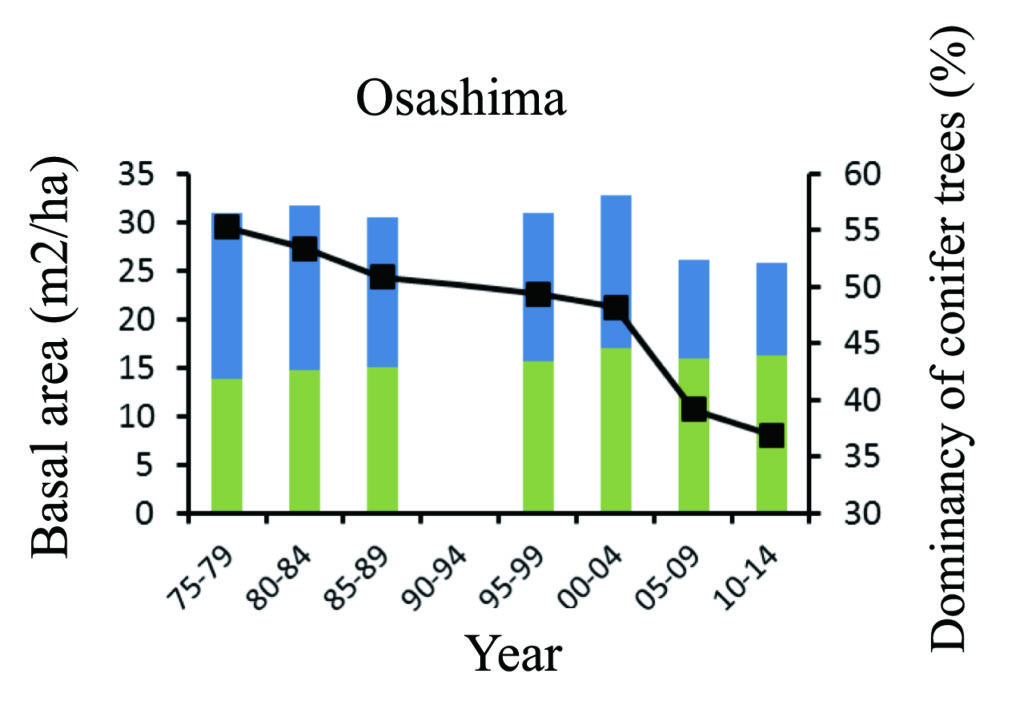 The dominancy of conifer trees (line) has declined in the past decades in Osashima primeval reserve area. Changes in basal area density of conifer trees and broad-leaved trees are shown in blue bars and green bars respectively. (Hiura T., et al., Forest Ecology and Management, July 22, 2019)

“Shifts in species composition could bring about major changes in the ecological systems of mixed forests, such as their roles in carbon storage, quality water provision, biodiversity maintenance and wood supply. In order to devise measures that help us adapt to climate change, it is essential to analyze the state of forests from the perspective of their ecological functions and services (benefits to humans),” Tsutomu Hiura commented. 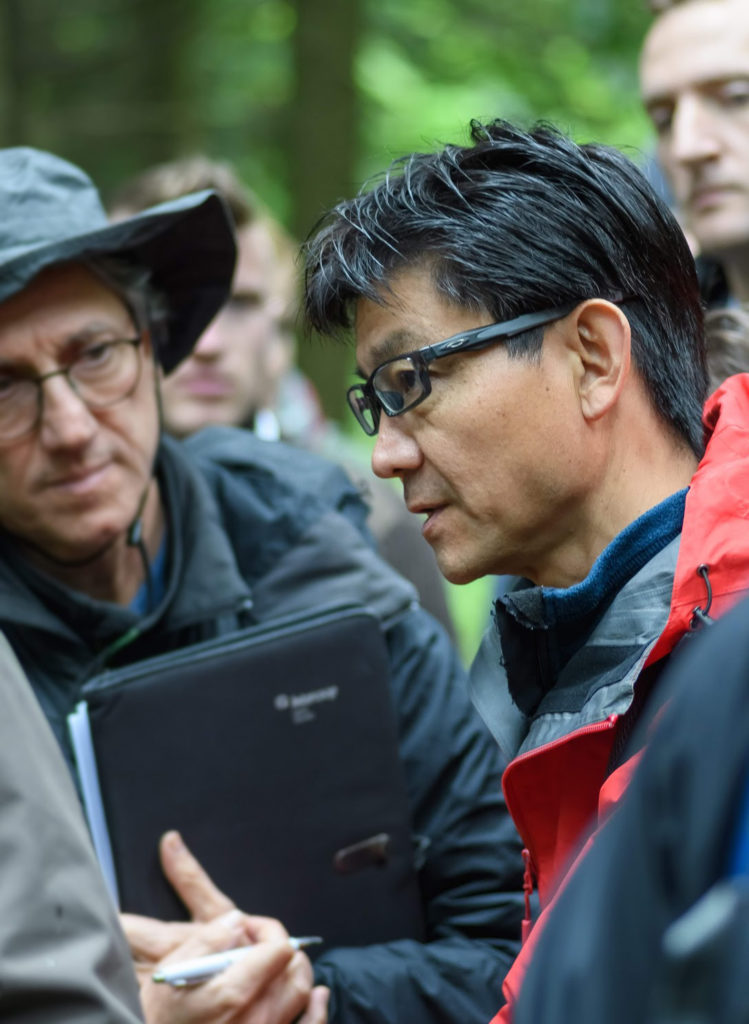 Tsutomu Hiura of the research team.