Closer to the source of the itch

Scientists at Hokkaido University are getting closer to understanding the underlying mechanisms that lead to psoriasis. 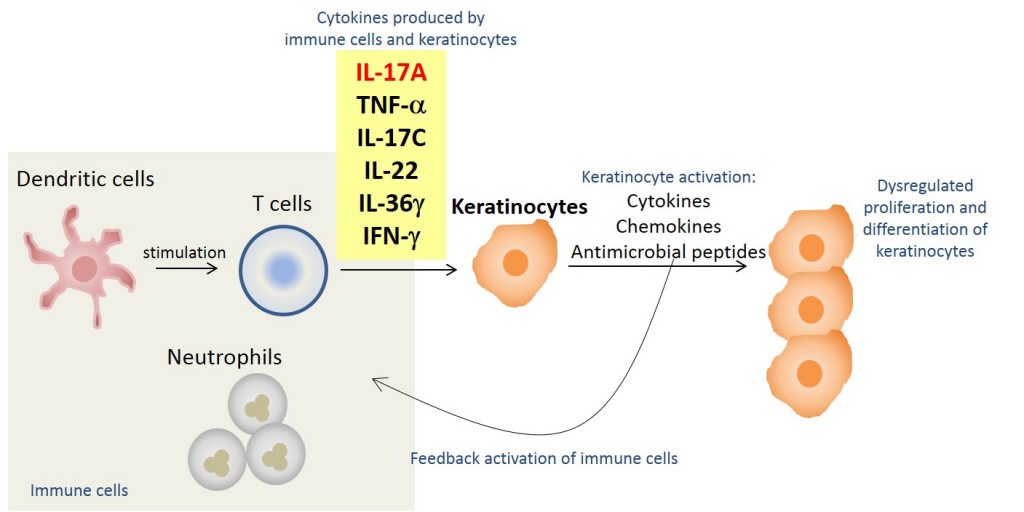 Psoriasis is an inflammatory skin condition that affects some 125 million people worldwide. It is characterized by itchy, scaly skin plaques. The exact cause of psoriasis is unclear. But mounting evidence implicates the immune system in the overproduction of cell-signalling molecules called cytokines, which stimulate skin cells called keratinocytes to express genes that maintain an inflammatory microenvironment. Now, scientists at Hokkaido University in Japan have found more evidence that a cytokine called IL-17A is especially critical in this process.

In a previous study published in 2012, researchers treated psoriasis patients with antibodies that attack IL-17A and with a substance, called an antagonist, that acts against tumour necrosis factor, another cytokine strongly implicated in psoriasis. They found that, after two weeks, a much larger set of psoriasis-related genes were suppressed and to a greater magnitude in the patients treated with anti-IL-17A. The researchers concluded that IL-17A is the dominant cytokine involved in the expression of psoriasis-related genes.

The Hokkaido University researchers aimed to reproduce these results in the laboratory. They cultured a single layer of normal keratinocytes with a mixture of six different cytokines known to be involved in psoriasis, and found that it induced the expression of psoriasis-related genes. They then compared the gene expression of these keratinocytes to others treated with various combinations of the same cytokines lacking one cytokine each. When the keratinocytes treated with all six cytokines expressed significantly more genes than one of the lacking combinations, it meant that the lacking cytokine was playing an influential role for the expression of those genes.

Importantly, the team identified a set of psoriasis-related genes in keratinocytes that are regulated by IL-17A. One of these genes in particular, called NFKBIZ, was found to have a significant role in the IL-17A pathway. This gene encodes a protein that plays a well-known role in regulating the body’s immune response to infection.

The new study, published in the journal International Immunology, will be useful for furthering the understanding of the IL-17A signaling pathway and how this cytokine interacts with others in the pathogenesis of psoriasis.

Original Article;
IL-17A plays a central role in the expression of psoriasis signature genes through induction of IκB-ζ in keratinocytes, International Immunology (3.3.2016)