Confronting Challenges and Creating New Value through the All-Hokkaido Approach

This interview was published in the Spring 2022 issue of Litterae Populi. The full issue can be found here. 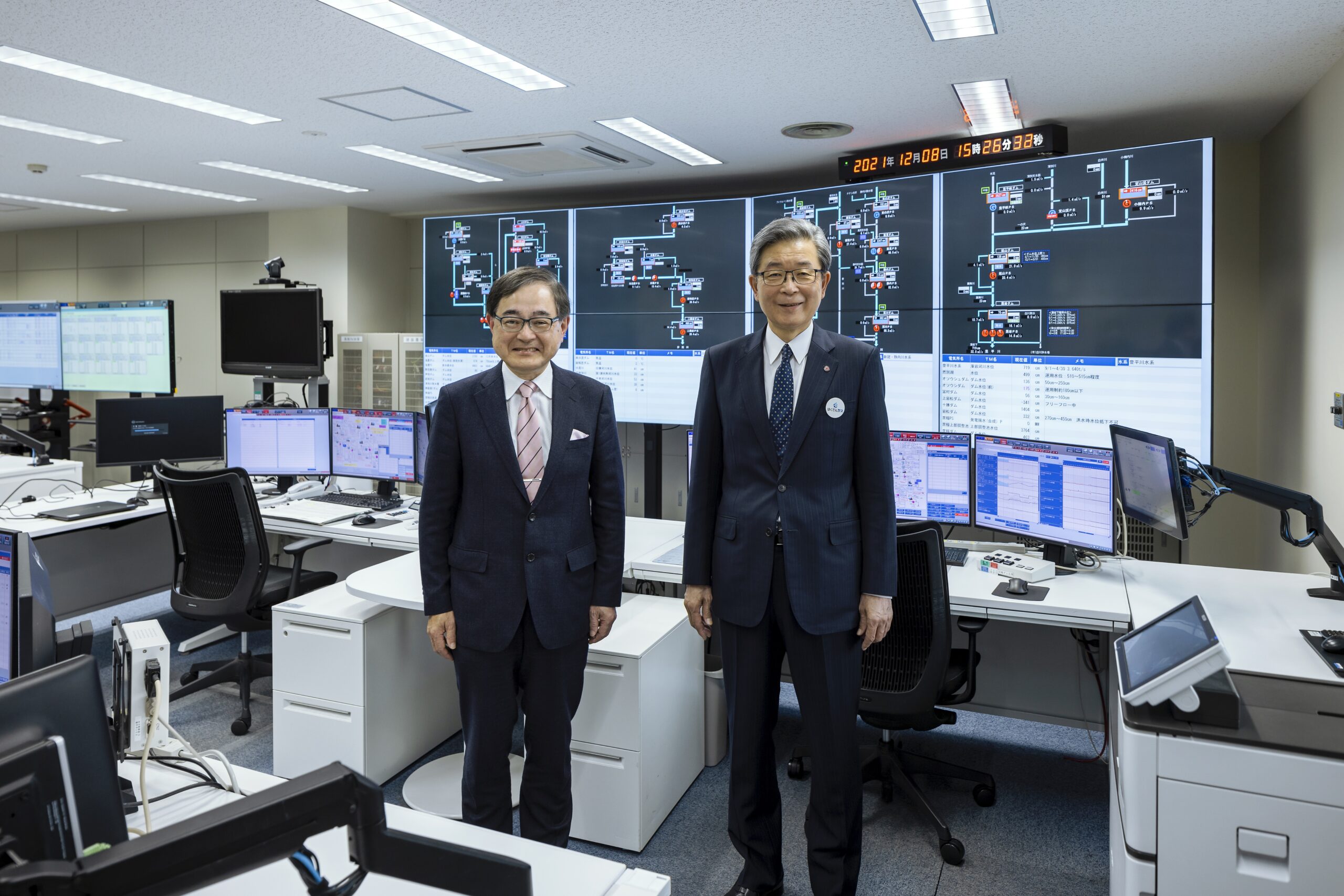 Hokkaido Electric Power Company (HEPCO) follows the three management philosophies of Respect for Humanity, Contributions to Local Communities, and Efficient Management, as well as the corporate slogan, Light up Your Future. Since its establishment in 1951, the company has inherited the wisdom and ideas of its predecessors and continues to support life and industry in Hokkaido as a leader in energy supply, with electricity at its core.

President Kiyohiro Houkin, who is reforming the University with the aim of making it unparalleled, spoke with Akihiko Mayumi, the chairperson of the board of HEPCO and an alumnus of the University, about his life and corporate philosophy, as well as the future of Hokkaido. 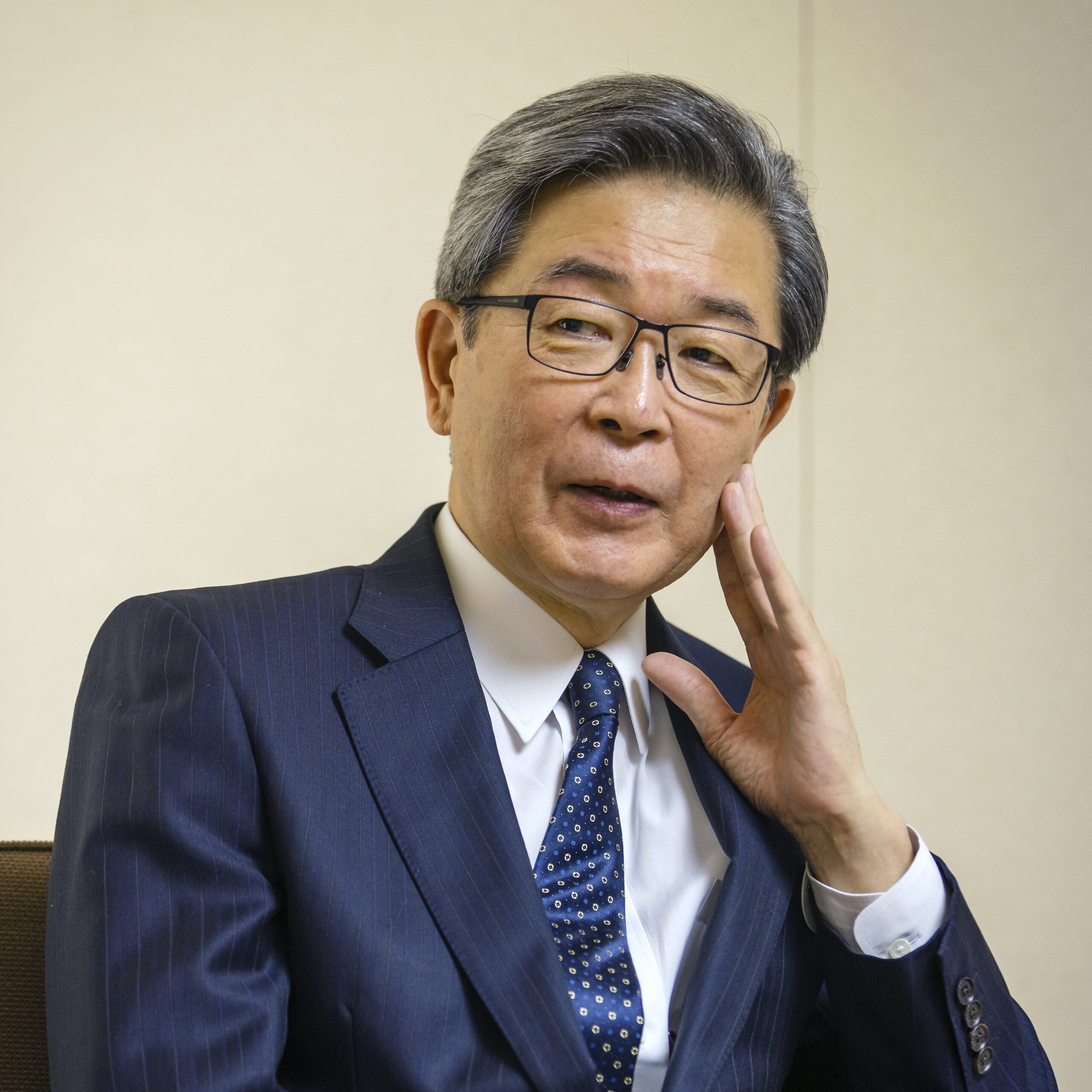 Chairman of the Board, Hokkaido Electric Power Company 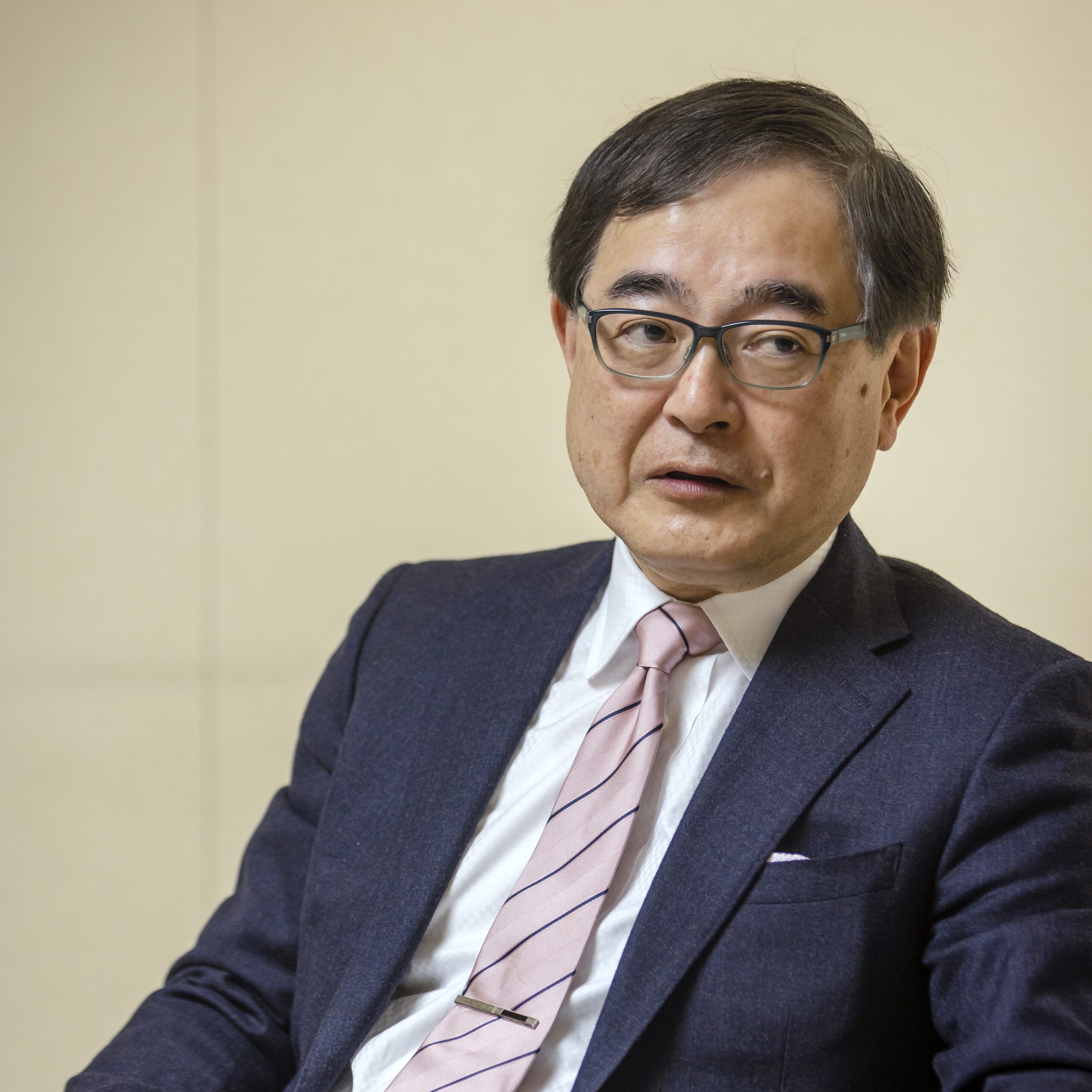 With the desire to work for Hokkaido

Houkin: First, please tell us about your background and how you came to enter Hokkaido University.

Mayumi: I was born in Asahikawa, Hokkaido, in 1954, and lived in Asahikawa City until I graduated from high school. As a child, I was rambunctious and loved playing outside more than studying. I joined the Boy Scouts, went camping, and enjoyed other outdoor activities. In my junior high school days, I played soft tennis in summer and skied with the ski club in winter.

When I took the university entrance exam, I set my sights on medical school because my brother had gone to Sapporo Medical University, and I wanted to become a doctor myself and do something for Hokkaido. Unfortunately, however, I was not successful. After that, I decided to stay in Hokkaido as an engineer and do something, so I went on to study electrical engineering at the School of Engineering.

Houkin: You are the same age as me. What was your family like?

Mayumi: My father was born in Himeji City, Hyogo Prefecture, and moved to Asahikawa City relying on his uncle to run his own lumber business. My mother was passionate about my education, so from the time I was an elementary school student, I took lessons in calligraphy, piano, abacus, and more in addition to attending cram school. I was the middle child of three male siblings. My older brother studied hard to become a doctor, my younger brother was spoiled because he was the youngest, and I guess I wound up somewhere in between the two.

Houkin: Why did you decide to work for Hokkaido Electric Power Company when you had a variety of options?

Mayumi: Even after entering university, my desire to do what I could for Hokkaido did not waver. There are many companies related to electrical engineering, but they are limited when it comes to working in Hokkaido, so my first choice was to work for Hokkaido Electric Power Company. At that time, there were 63 students in the electrical engineering department. There was a quota for professor recommendations, and only one undergraduate student could be recommended for admission to HEPCO, and I ended up being that student. When I later asked the professor in charge of employment why, he told me, “Because you were well-suited for HEPCO.” Each company had its own culture, and the professor may have assigned students that matched the culture of the company. 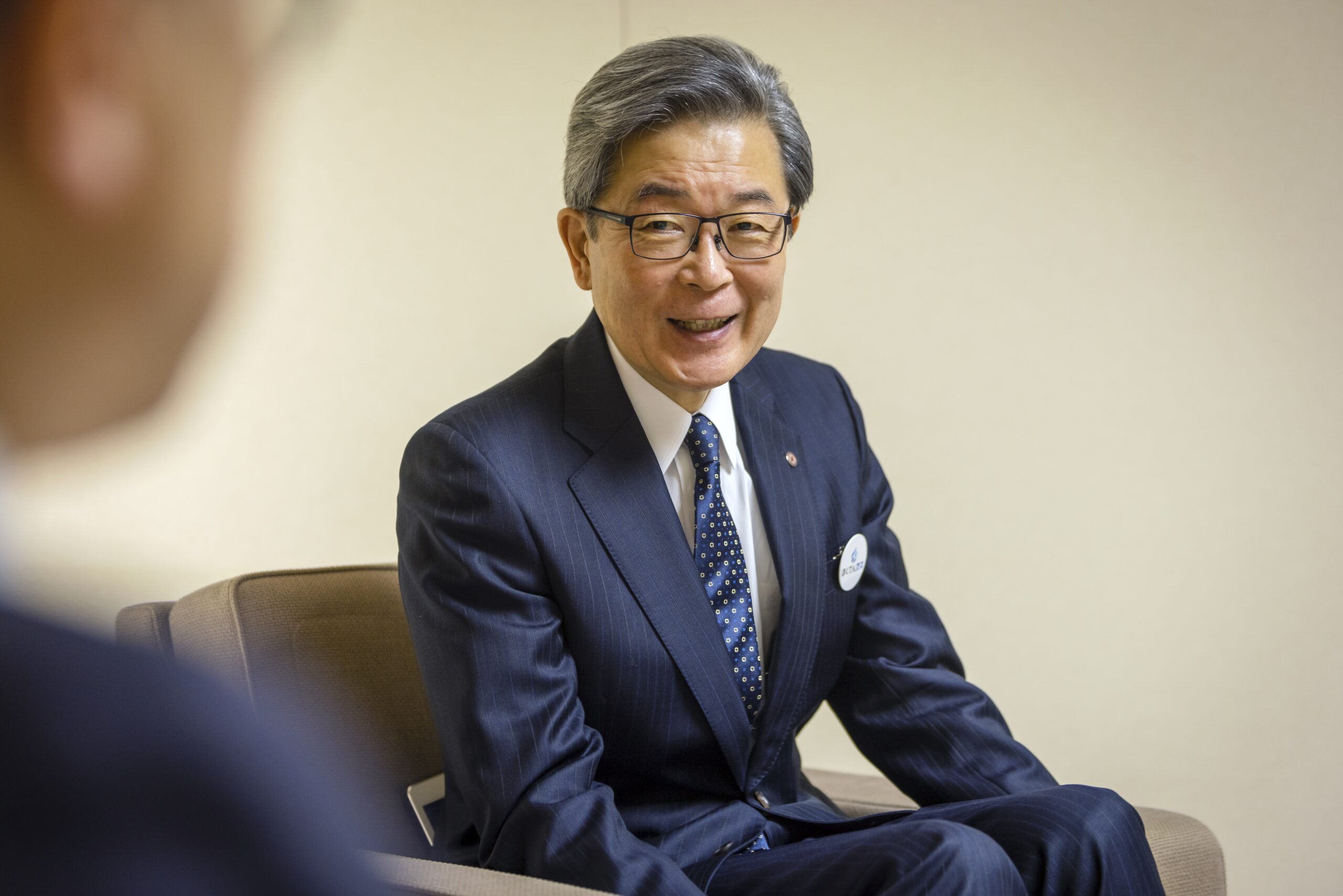 Houkin: I strongly sense your desire to contribute to the local community and see that it remains to this day. Are there any people in your life who have influenced you?

Mayumi: Professor Jun Hasegawa, my mentor when I was a student. He also supervised my thesis. In addition to Professor Hasegawa, people from his laboratory have helped with various studies and evaluations for HEPCO, and I have maintained a good relationship with them even after joining the company.

Immediately after I joined the company, I spent a year and a half working in the field constructing and maintaining power lines. Sometimes I had to climb a 70-meter steel tower to do the work. Professor Hasegawa advised me on various problems at that time as well. Professor Hasegawa is also currently an outside auditor of HEPCO. I see him in person every month at a board meeting where he shares various opinions, so I feel like I am attending one of his lectures once a month.

From engineer to manager

Houkin: What kind of work have you been doing since then?

Mayumi: I worked at a construction site doing major power line work in Sapporo and worked at the Head Office on the power transmission network. I also went to England for six months for overseas training. At the time, the British power company was state-owned, but was to be privatized the following year. The employees seemed to be confused about what would happen when privatization took place, so it was instructive to hear numerous on-site stories.

I then became a recruiter in the personnel and labor relations department, secretary to the president, site manager, and then head of engineering in charge of the electrical system at the Head Office. At that time, I spent much of my time negotiating with the Ministry of Economy, Trade and Industry during the phase of introducing a feed-in tariff system for renewable energy. It was hard work, but it was also a great experience for me because I was able to communicate with the national government in many different ways.

During the period when nuclear power plants were shut down after the Great East Japan Earthquake, the supply and demand of electricity was extremely tight, and for several years we were under considerable strain to ensure a stable supply during the winter months. Also, when I was president, a blackout (large-scale power outage) occurred due to the Hokkaido Eastern Iburi Earthquake. The blackout was caused by a combination of various conditions, and I apologize once again for any inconvenience this may have caused for Hokkaido residents.

Houkin: The energy industry is the very foundation of our lives. Japan has stated that it aims to achieve carbon neutrality by 2050. In recent years, global warming countermeasures have been looming as a reality, and the sense of speed is overwhelming. HEPCO celebrated its 70th anniversary in 2021 and has formulated a vision for 2030. How do you plan to tackle the practices that are unique to Hokkaido? 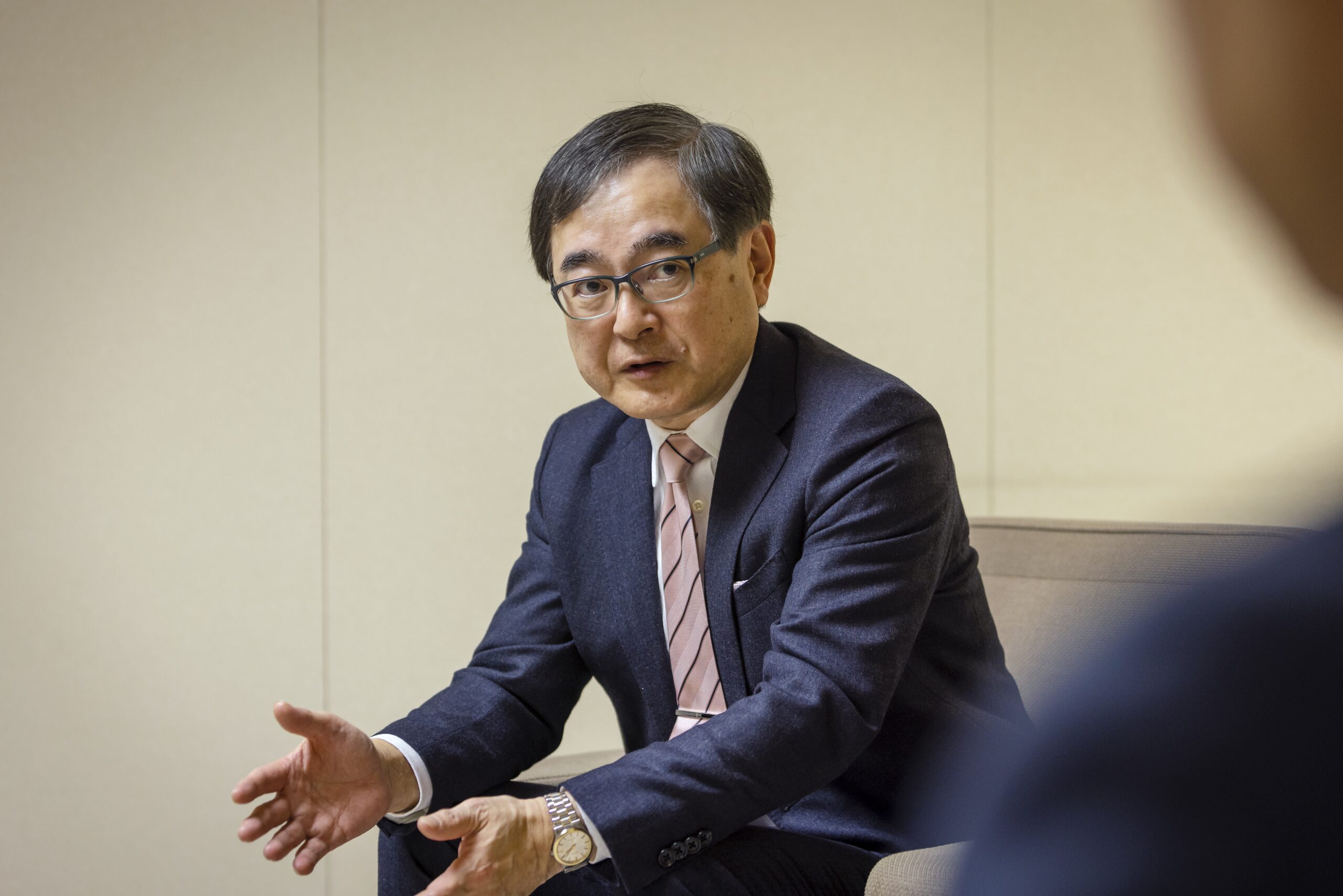 Mayumi: The HEPCO Group Management Vision 2030 is positioned as a roadmap for moving forward as a comprehensive energy company while responding to trends such as liberalized competition in electricity and carbon neutrality, and starting a gas business.

Consideration for the formation of a sustainable world is both a corporate and human responsibility. Since Japan is a country that must import various types of energy from overseas to meet its energy needs, securing energy is also a major issue in terms of national security. It is important to address issues such as stable supply and the burden on the public while gaining public understanding.

The Hokkaido Government is also promoting the Zero Carbon Hokkaido initiative, and we intend to cooperate as much as we can. Hokkaido is blessed with natural energy sources such as livestock manure and woody biomass as well as wind and solar power, so it is expected to form a zero-carbon system that is unique to Hokkaido. Since CO2 emissions from households in Hokkaido are much higher than in other regions due to winter heating use, we also recommend that efforts be made to have households think broadly about what measures they can take to reduce CO2 emissions at home first.

In Japan, which relies on foreign countries for the majority of its energy, securing and balancing energy is also a major issue. In addition to nuclear power, oil, coal, LNG, and renewable energy, it is also necessary to work on ammonia co-firing to replace coal and hydrogen-fueled power generation.

Toward the future of Hokkaido

Houkin: Since you also have the important responsibility of chairing the Hokkaido Economic Federation, please tell us about your thoughts on the future of the Hokkaido economy.

Mayumi: The fundamental problem in Hokkaido is a declining and aging population. Furthermore, in the wake of the COVID-19 pandemic, the financial damage to companies has been very severe. On the other hand, Hokkaido has a lot of potential. As Japan’s food base and energy base, we need to take full advantage of these resources to solve various problems. The Hokkaido Economic Federation has published its 2050 Hokkaido Vision, setting milestones for 2030 with six goals and 47 initiatives, and has been going around explaining them in various areas. In the future, we need to work with local governments and companies to build on our successes.

Houkin: I feel that Hokkaido is strongly dependent on the national government. From now on, Hokkaido needs to make decisions independently and autonomously.

Mayumi: Reflecting on the past, there was a time when people said, “Hokkaido has no ‘head.’” Hokkaido relied on the national budget for Hokkaido development, and even when it attracted large companies, the brainwork such as research and development was carried out in Honshu, the mainland of Japan, and Hokkaido lacked the ability to create its own industries. As a result, the primary industry is the mainstay of the region, with the manufacturing industry accounting for only about half the share of the mainland.

In the future, rather than leaving it to the central government, each region and company must come up with their own particular industrial vision and put it into practice. The investment should not just end with the construction of public buildings. It should make profits, lead to reinvestment, and create jobs. In other words, it will not lead to the revitalization of Hokkaido unless we create a system that enables money to circulate inside the region.

Houkin: Universities also need to become more independent. In this sense, I felt that the vision announced by the Hokkaido Economic Federation conveys a very strong message. I hope that the vision will be widely read by the people of Hokkaido and those in industry. Finally, could you leave us with a message for the students, faculty and staff of the University?

Mayumi: It’s an old story, but in 1972 the Wakkanai region experienced heavy snow damage, and a transmission tower collapsed due to snow accretion. It was a big problem at the time, and with the cooperation of the Institute of Low Temperature Science at Hokkaido University, we developed a ring that was difficult for snow to adhere to. This has drastically reduced the number of snow damage accidents, and I am truly grateful to the people who worked at the Institute of Low Temperature Science at that time. This technology is still being used by electric power companies nationwide. 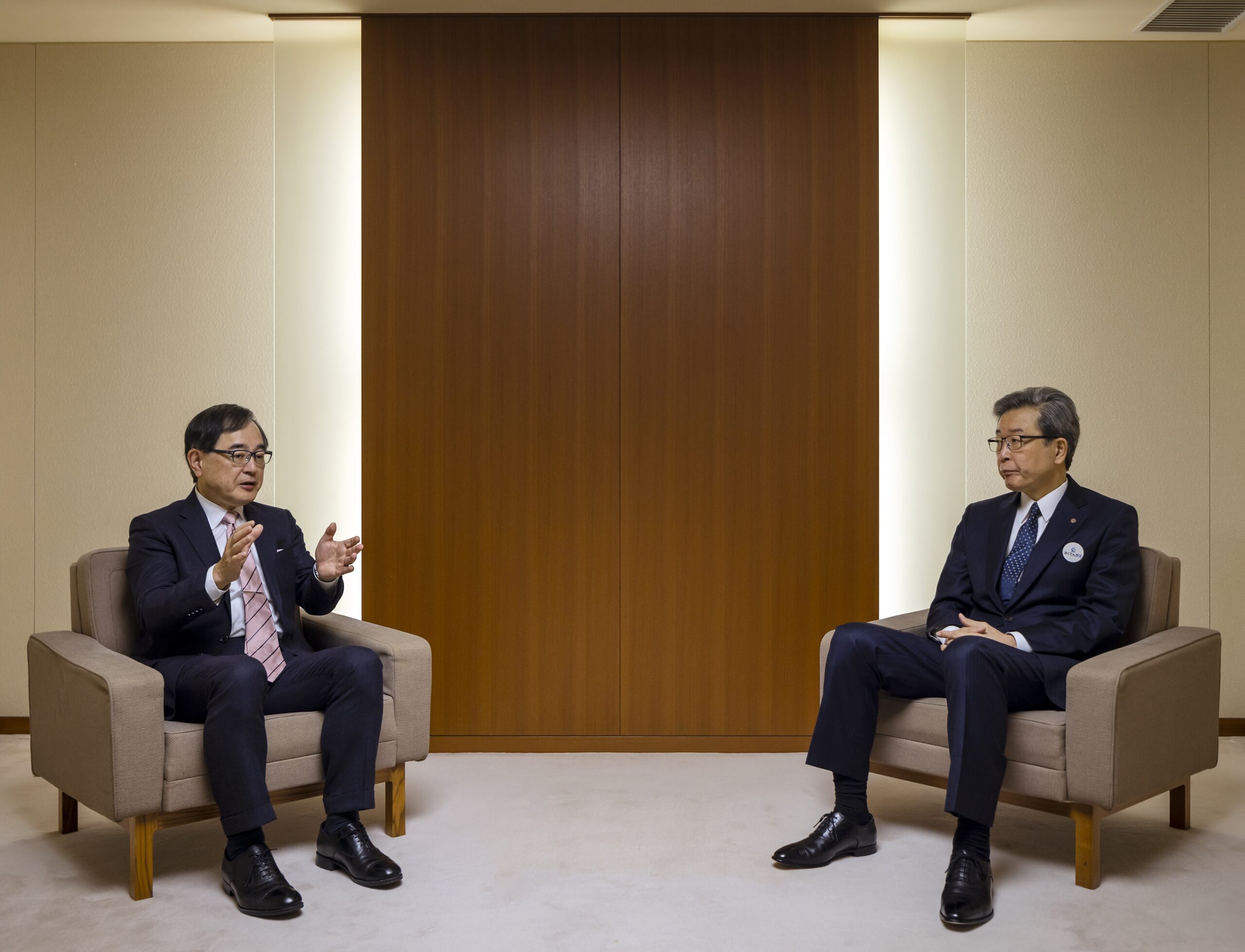 When I speak to young people, I introduce an aphorism of Honda founder Soichiro Honda. “Youth is the courage to face challenges and the wisdom to create new value outside the box.” Another is the equation of “work performance = approach × ability × passion.” This approach involves positivity and cheerfulness. This balance is extremely important, and I urge all students to be aware of it. One last thing is “glorious discontent.” This refers to complaining in a constructive and positive manner. It is important to say out loud, “This is how I would do it,” and move on.

Houkin: I was once told by a previous professor that Hokkaido people are very nice, but quiet. I believe this is also true for Hokkaido University, so I am advocating a winning culture to create an upbeat and positive atmosphere.

We need to turn the winning of major projects and awards into something that faculty, staff, and students feel they deserve because they are part of Hokkaido University. Thank you very much for your time today.

This interview was published in the Spring 2022 issue of Litterae Populi. The full issue can be found here.