The Yakushima sika deer (yakushika: Cervus nippon yakushimae), a subspecies of the Japanese sika deer (Cervus nippon), evolved without natural predators on the island of Yakushima, in Kagoshima Prefecture, Japan. It inhabits the forests on the island which were declared a World Heritage Site in 1993. Within the site, the yakushika has not been hunted in the past 50 years; however, since 2014, their population has been decreasing. This phenomenon is especially curious, as Japanese researchers believed that sika deer populations in Japan would not decrease without human intervention.

A group of three scientists, including Hokkaido University’s Associate Professor Naoki Agetsuma, have discovered indications that the reduction in the population of the yakushika is due to natural regulation, a first in Japan. Their findings were presented at the 68th meeting of the Ecological Society of Japan in March 2021, and were published in the Japanese Journal of Conservation Ecology.

The team conducted onsite research every summer between 2001 and 2018 by designating two areas—the Hanyama and Kawahara districts, each encompassing about 80 hectares—for surveys, and counted the deer present while they trekked 5-kilometer census routes. Further, they tracked 19 marked deer in the Hanyama district for four years from 2014 to determine whether they have moved out of the district.

The scientists found that the number of deer increased at an average annual rate of 9 percent from 2001 through 2014 but began to decrease at an annual rate of 15 percent after then. The number of deer to have migrated to areas outside Hanyama district is estimated at no more than 3.5 percent of the population, annually. The team has frequently witnessed deer dying of unknown causes since 2016.

Changes in the yakushika population index in the World Natural Heritage Area of Yakushima from 2001 to 2018. The population density index peaked in 2014 and has been on a downward trend. Follow-up surveys confirmed that the downward trend is continuing, as of the summer of 2020 (solid triangles are numbers from Hanyama, open squares are numbers from Kawahara; Naoki Agetsuma, Yoshimi Agetsuma-Yanagihara, Hideki Sugiura. Japanese Journal of Conservation Ecology. April 20, 2021).

The overall decline is attributed to natural factors, the first time that a natural decline of sika deer has been observed in Japan. The exact causes have yet to be determined, and may require monitoring the population for several decades while prohibiting culling.

Currently, most sika deer populations in Japan, including other areas of Yakushima, are controlled by culling, in line with the government’s deer management policy. Thus, intact populations that exist without human intervention, such as the one in the World Heritage Site, are very rare and valuable. However, in late 2020, the government initiated culling to manage deer populations in a part of the World Heritage Site. “If the population can be naturally regulated, Japan should consider following the example of U.S. national parks that have adopted the natural regulation approach for many years, while further unlocking secrets of the unknown aspects of sika deer inhabiting Japan,” says Naoki Agetsuma. 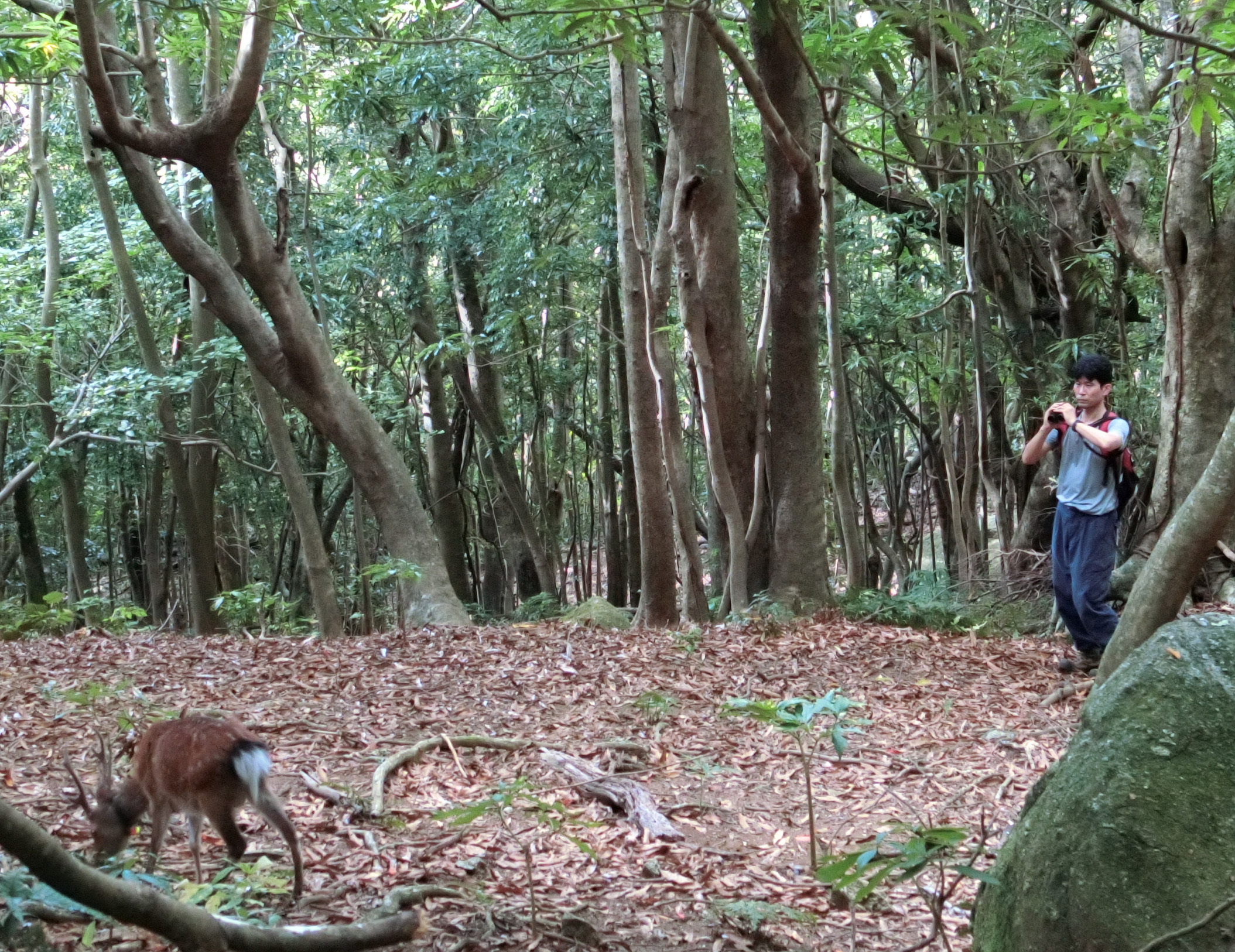 Naoki Agestuma observing a marked male yakushika deer during the survey of the Hanyama district population in 2016 (Photo: Yoshimi Agetsuma-Yanagihara).

This research was supported by the the Wildlife Research Center (Cooperation Research Program) and the Primate Research Institute (Cooperation Research Program), Kyoto University, the Fujiwara Natural History Foundation, the Japan Society for the Promotion of Science (JSPS) KAKENHI (14704013, 16780107, 17K00645, 18H02218), The Nature Conservation Society of Japan’s “Conservation and Management Scheme through Long Term Assessment of Natural Ecosystem in the Yakushima World Heritage Area, Southern Japan”, and the Research Institute for Humanity and Nature’s “Evaluation of Sustainable Forest Use Options and their Perspectives”.