Multi-omics research (*1) on Thermosulfidibacter (isolated from a hydrothermal field in the Southern Okinawa Trough) has enabled the discovery of possibly the most primordial form of tricarboxylic acid (TCA) cycle.

The TCA cycle is a key metabolic mechanism essential for most organisms. It dates back to the appearance of the last common ancestor on Earth and is considered to be “one of the earliest lines of metabolism” since the initiation of chemical evolution (Fig. 1). While the TCA cycle might exist in several forms, there are various arguments concerning its primordial composition at the time when life began on earth.

The research group has discovered that the thermophilic bacterium Thermosulfidibacter takaii (Fig. 2, hereinafter referred to as “Thermosulfidibacter”) located in a basal position of the bacterial has a novel TCA cycle, possibly the most primitive form yet known. Multi-omics analyses, including a novel method in metabolomics, have revealed that Thermosulfidibacter has a reversible TCA cycle, that can flexibly change the reaction direction depending on available carbon sources, regardless of being under autotrophic (*2) or mixotrophic (*3) conditions (Fig. 3). Until date, no other organism has been found to exhibit both carbon fixation (autotrophy) and decarboxylation (heterotrophy) functions in the TCA cycle, using the same set of enzymes. Among the TCA cycles, the one observed in Thermosulfidibacter is “exotic” due to its ability to conveniently revert the direction of the reaction in response to dynamically fluctuating environmental conditions, and it is thought to exhibit characteristics of the most basal form of the TCA cycle.

Although the perpetual question, of whether the initial forms of life were autotrophic or heterotrophic, remains to be answered (Fig. 4), the characteristics of the primordial TCA cycle revealed in this study strongly suggest the possibility of the birth of mixotrophic life that could vary its metabolism flexibly according to the abundance of available organic and inorganic carbons on the primordial Earth.

The above results were published in the Science on February 2, 2018 (JST).

Title: A primordial and reversible TCA cycle in a facultatively chemolithoautotrophic thermophile

*2: In this paper, the term “autotroph” refers to a chemolithoautotrophic (chemosynthetic autotrophic) organism. In the case of Thermosulfidibacter, energy is acquired from hydrogen as an electron donor. The acquired energy is used to synthesize organic matter from inorganic carbon and to maintain cellular functions. 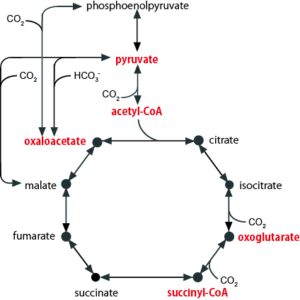 Fig. 1: The relationship between the TCA cycle and pyruvate, acetyl-CoA, oxaloacetate, oxoglutarate, and succinyl-CoA is shown. Copyright: JAMSTEC 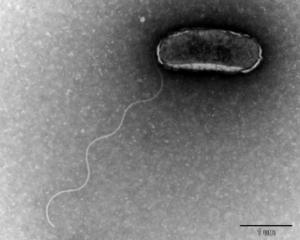 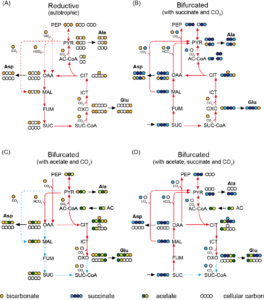 Fig. 3. Schematic representation of the operation of the (r)TCA cycle of T. takaii under the chemolithautotrophic and chemolithomixotrophic growth conditions based on the isotopologue analysis of protein-derived amino acids using 13C-labeled substrates. Cells were grown chemolithoautotrophically (A). Cells grown chemolithomixotrophically with succinate (B), acetate (C), and succinate and acetate (D) in the presence of yeast extract. Circles indicate carbon atoms in the compound (the position number is read left to right). ATP-independent citrate cleavage was observed in cells grown chemolithoautotrophically and chemolithomixotrophically with succinate. Red dotted lines indicate pathways confirmed by transcriptome and proteome analyses but not confirmed by the isotopomer analysis. Blue dotted lines indicate pathways confirmed by the transcriptome and proteome analyses but theoretically cannot be identified by the isotopomer patterns. Copyright: JAMSTEC 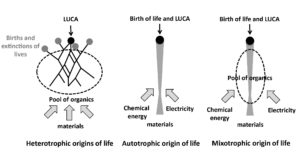 Fig. 5: Various forms of the known TCA cycle and the reversible TCA cycle (detected in Thermosulfidibacter) are depicted. Copyright: JAMSTEC