Driving a wedge into historic gaps of climate science 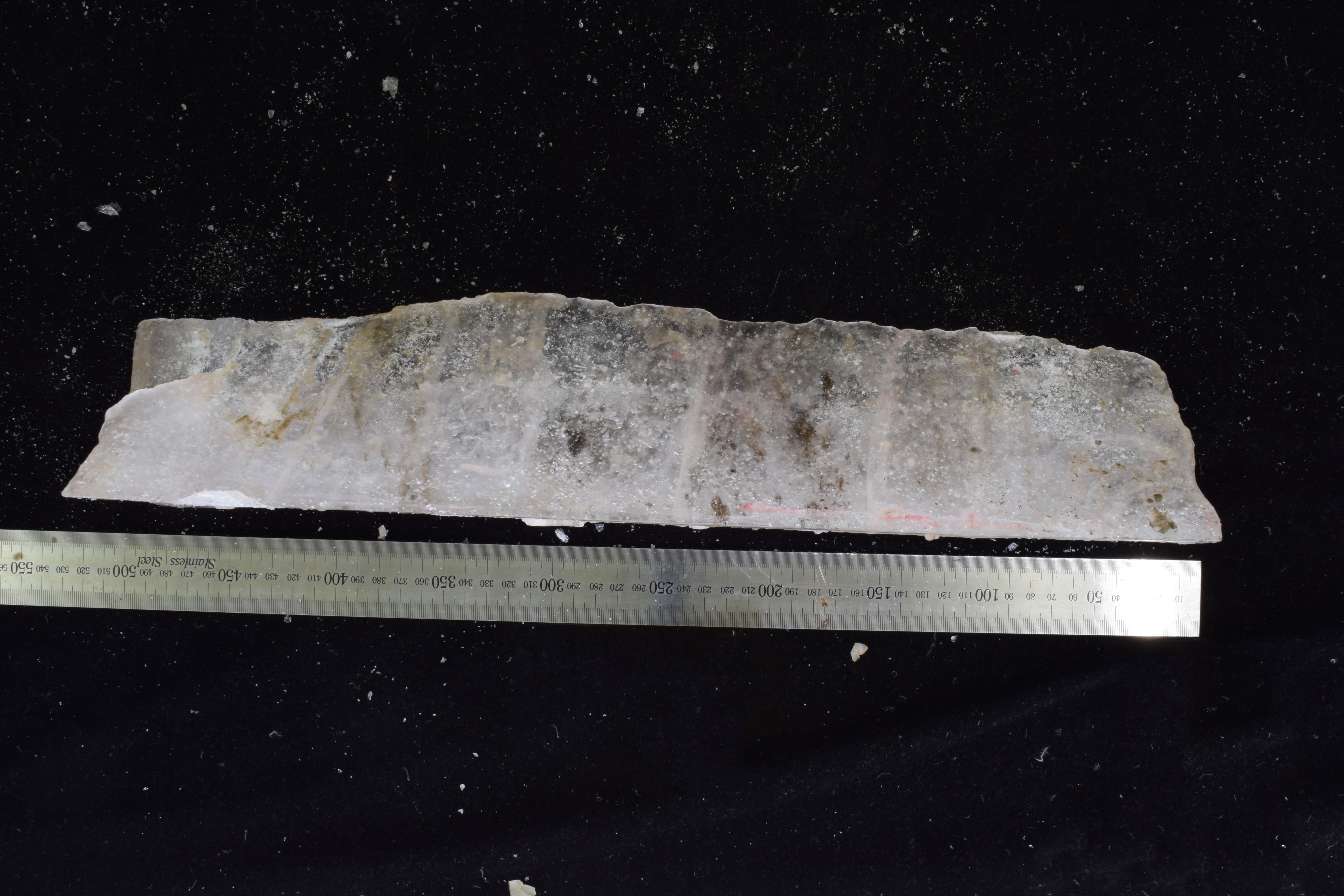 A section of an ice wedge extracted from the northern Alaskan tundra is providing insight on the region’s geological history. Copyright: Yoshinori Iizuka, Hokkaido University.

Evidence of historic marine life present in Alaskan permafrost is helping scientists reconstruct ancient changes in the ice cover over the Arctic Ocean.

Hokkaido University researchers and colleagues have found that the Beaufort Sea, on the margin of the Arctic Ocean, was not completely frozen over during the coldest summers of the late Ice Age, some 12,800 years ago. Their methodology, using ice wedges from the Alaskan permafrost, could help scientists further reconstruct historic sea-ice conditions in the Arctic Ocean, and thus improve forecasts for the future.

Scientists have long studied ice core samples from large permanent ice masses in the Antarctic ice sheet around the South Pole, and in Greenland near the North Pole. These samples contain relics from our climate’s distant past, such as ions, dust particles, sea salts, volcanic ash and air bubbles, which can give us information on how Earth’s climate has changed over thousands and thousands of years.

Now, a research team led by Yoshinori Iizuka of Hokkaido University’s Institute of Low Temperature Science has found a way to investigate the geological history of areas near the north Arctic sea, which had previously been difficult using standard methods.

Permafrost is a layer of frozen ground present under the tundra of high northern latitudes in areas such as Russia, Canada, and Alaska. It contains massive wedges of ice that form when meltwater freezes in underground cracks. Iizuka and his team investigated ion concentrations in an ice wedge sample collected near the city of Barrow in northern Alaska. Another group dated this ice wedge back in 2010 to belonging to the late Pleistocene period, which represents the latter end of the last Ice Age some 14,400 to 11,400 years ago.

The team tested the levels of several ions in the ice wedge, including calcium sulphate, sodium, chloride, and bromide. Significantly, they determined that methanesulfonate (MS) ions in the wedge reliably indicated marine life activity, as they originated from oxidized dimethyl sulphide, a compound produced by plankton and ice algae attached to seasonal sea ice in the summer. 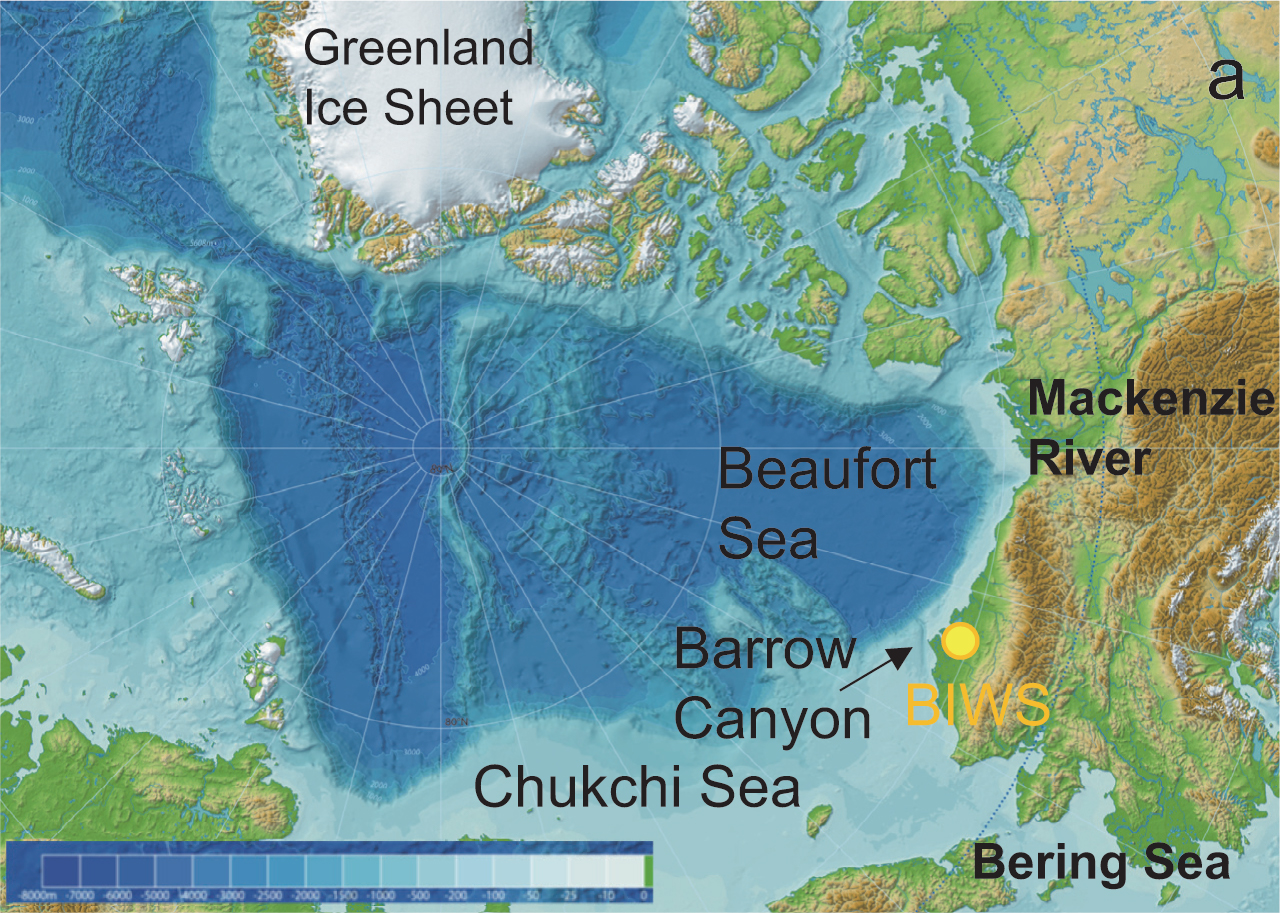 This map shows the current sea level around the Arctic region, with BIWS indicating the location of the ice wedges near Barrow, Alaska. Map provided by the Japan consortium for Arctic Environmental Research. (Iizuka Y. et al., Ion concentrations in ice wedges: An innovative approach to reconstruct past climate variability, Earth and Planetary Science Letters, March 26, 2019.)

MS ion concentrations were high in the parts of the wedge representing the coldest periods of the late Pleistocene, from 12,900 to 12,700 years ago. This indicates that, even during these coldest periods of the late Ice Age, the near-shore region of the Beaufort Sea near Barrow may not have been completely filled by permanent ice, and that some open water existed in this area during the summers.

The team concludes in their study in the journal Earth and Planetary Science Letters that further studies of MS, bromide and sodium concentrations in other permafrost ice wedges could help scientists reconstruct past Arctic sea-ice conditions.  In addition, according to Dr. Iizuka, “Understanding the mechanisms behind fluctuations in the Arctic sea ice provides a useful foundation for developing future strategies related to the Arctic region.” 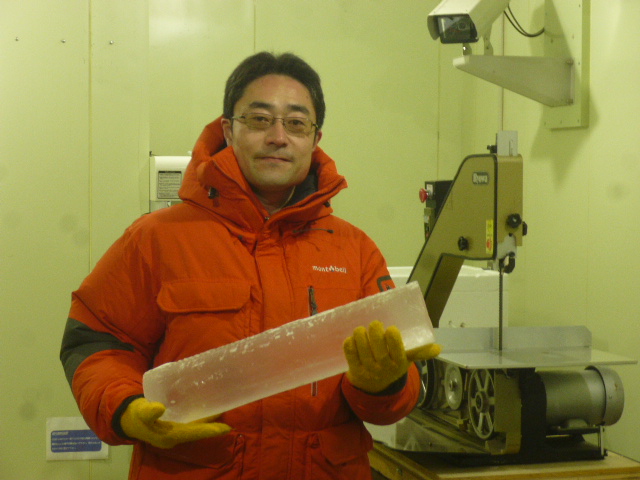 This study was supported by MEXT/JSPS KAKENHI Grant Number 16H05615, 26257201, and 18H05292, Joint Research Program of the Institute of Low Temperature Science, Hokkaido University (18S007 and 18S010). This study was also supported by the Environment Research and Technology Development Fund (2-1605) of the Ministry of the Environment, Japan (ERTDF), Arctic Challenge for Sustainability (ArCS, Atmospheric climate forcers in the Arctic, PI: Makoto Koike) and The Next Generation Ecosystem Experiment (NGEE-Arctic) project.