Observations by Japan’s Venus climate orbiter Akatsuki have revealed an equatorial jet in the lower to middle cloud layer of the planet’s atmosphere, a finding that could be pivotal to unraveling a phenomenon called superrotation. 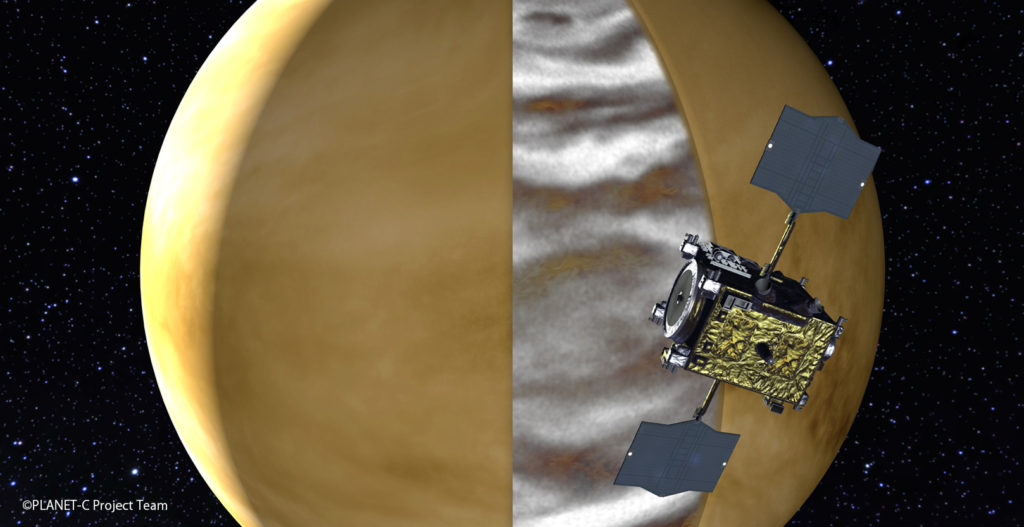 An illustration of Akatsuki successfully tracking lower-altitude clouds during the night with its near-infrared camera IR2. ©PLANET-C Project Team

Venus rotates westward with a very low angular speed; it takes 243 Earth days to rotate once. The planet’s atmosphere rotates in the same direction but at much higher angular speeds, which is called “superrotation.” The planet is covered by thick clouds that extend from an altitude of about 45 kilometers to 70 kilometers. The superrotation reaches its maximum near the top of this cloud, where the rotational speed is about 60 times that of the planet itself. The cause of this phenomenon, however, is shrouded in mystery.

Akatsuki was launched in 2010 by the Japan Aerospace Exploration Agency to unravel the atmospheric mysteries of Venus. Although lower-altitude clouds cannot be seen through with visible light, Akatsuki’s near-infrared camera IR2 successfully tracked the clouds – in particular, thicker clouds between 45 kilometers to 60 kilometers in altitude. This was made possible by observing the silhouettes of clouds that appear when infrared light from thermal radiation originating in the lower atmosphere filter through clouds.

Slides showing two-hourly 2.26-μm radiance obtained by the IR2 camera onboard Akatsuki on July 11-12, 2016. The brightness is shown reversely (see the color bar at the bottom shown in the units of W m-2 sr-1 μm-1), so the brighter areas represent fewer radiance, indicating thicker clouds. Remark: The original images between 18 and 22 h include the dayside of Venus in the observational field of view, so the radiance change near the day-night boundary in the middle of the images is spurious owing to the dayside brightness. ©PLANET-C Project Team

Similar observations were previously made by the Venus Express orbiter of the European Space Agency and Galileo spacecraft of the U.S. National Aeronautics and Space Administration, but they provided only limited data of the planet’s low-latitude zones. From these observations, scientists speculated that wind speeds at lower-to-middle cloud altitudes are horizontally uniform and have few temporal variations.

In the study published in Nature Geoscience, the team of researchers including Hokkaido University Associate Professor Takeshi Horinouchi analyzed the data collected by Akatsuki between March and August 2016. The team employed a cloud-tracking method they recently developed to deduce horizontal distributions of winds based on data from Akatsuki.

They discovered an equatorial jet in the wind velocities based on image data from July 2016 and that the jet existed at least two months after that. In March that year, the wind velocities in the same latitude zones were rather slow – thus there was no jet. 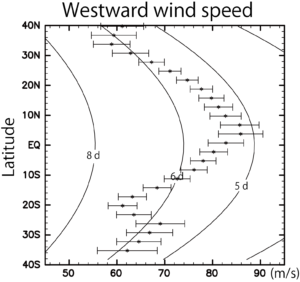 The findings showed for the first time that wind velocities can be markedly high forming a jet near the equator, which have never been found not only in the scantily observed lower to middle cloud layers but also in the more-extensively studied high layers.

“Our study uncovered that wind velocities in the lower-to-middle cloud layer have temporal and spatial variabilities much greater than previously thought,” says Takeshi Horinouchi. “Although it remains unclear why such an equatorial jet appears, the mechanisms that could cause it are limited and related to various theories about superrotation. So, further study of the Akatsuki data should help glean useful knowledge not only about local jets but also would help address superrotation theories.”

Institute of Space and Astronautical Science