This article is an excerpt from the research magazine “Tackling Global Issues vol.1 Soft Matter: Material of the Future.”  Click here to see the table of contents.

When physicist Jian Ping Gong came to Japan about three decades ago, gel research was a minor scientific subject. Many researchers considered gels to be of little use as a material due to their structural complexity and mechanical weakness. Gong certainly thought so, too, but she took a bold step into a “messy” field. 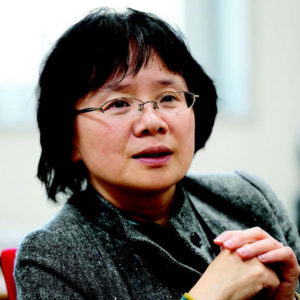 “Hydrogel was not a hot topic. Scientists thought it’s no use and didn’t even know how to characterize this kind of material. The structure is not in order, so you can’t use X-rays or any other devices to examine it. Especially for physicists, it’s a mess,” Gong said.

But, over the years, things have changed. Hydrogels are now emerging as a high-performance material with numerous potential applications and Gong has become a leading figure in the field of soft matter.

DN gels based on opposite networks

Gong’s team has opened up possibilities for hydrogels by developing double network (DN) gels. DN gels have attracted attention as an innovative material that has high water content, excellent mechanical strength and toughness. Despite containing about 90 percent water, the DN gels have compressive fracture stress about 100 times stronger than conventional single network gels. The novel gels also do not fracture up to a compressive strain of 90 percent, making them tough enough to withstand being run over by a large truck. Their fracture energy is comparable to rubber and soft load-bearing tissues like cartilage.

DN gels are synthesized by combining two networks with opposite characteristics. The networks are separately cross-linked, tightly in the first one and loosely in the second one. The former network is composed of rigid and brittle polyelectrolytes such as poly (2-acrylami-do-2-methylpropanesulfonic acid) or PAMPS, while the latter is made of flexible and stretchable neutral polymers such as polyacrylamide (PAAm). 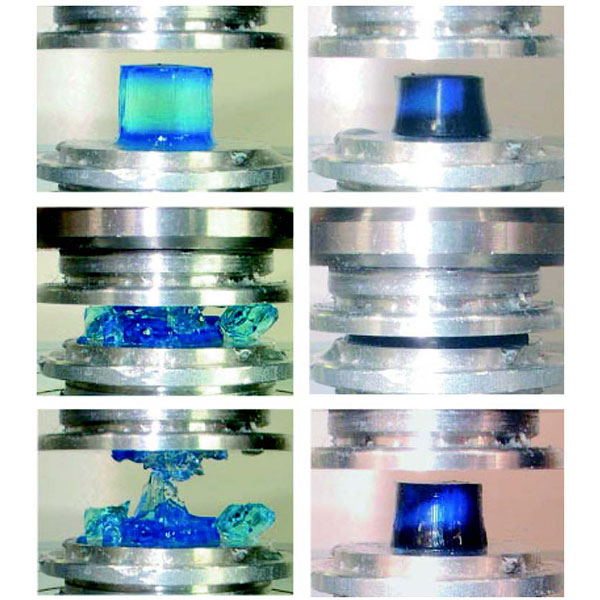 Hydrogels are structurally heterogeneous, a property that was believed to cause their weakness. In a bid to toughen the gels, some scientists formed a hydrogel with a homogeneous structure. That gave the gel elastic stability and mechanical strength, but it remained brittle. Its fracture energy indicates a low resistance against crack propagation, making it easy to break once a crack is induced. Gong, meanwhile, considered that the weakness of hydrogels was due to the lack of an energy dissipation mechanism during deformation, and took a different strategy by inducing a new heterogeneous structure preferentially. Gong’s approach worked.

This technique made it possible to create hydrogels with an unprecedented level of toughness. The DN concept, which was first reported in 2003, has opened a whole new area of polymer science. This groundbreaking discovery challenged the common belief that hydrogels are mechanically weak materials.

The first hint for creating such a tough gel was received accidentally by one of Gong’s students, Takayuki Kurokawa, who is now a Hokkaido University professor, during an experiment to reduce sliding friction of gels. Although creating tough gels was possible after finding the opposite networks, the principle behind their toughness had remained a mystery. Gong said her team repeatedly made assumptions and devised experiments to test them, but to no avail.

Eventually, the answer was found to be something that seemingly defied common sense. The toughness comes from the first network’s brittleness.

Her team found that the rigid, brittle network serves as a “sacrificial bond” by effectively dissipating energy and preventing catastrophic crack propagation through its internal fracture, while the soft, stretchable network sustains stress. Because the toughness is reinforced by sacrificing the brittle bonds, they are called sacrificial bonds, a term originally used to describe the phenomenon of toughening bones. With a mechanically fragile structure used to toughen a material as a whole, this principle offers a sea change in thinking about a toughening mechanism.

“It took about seven years to come up with this principle,” Gong said. “This principle is universal. Using this concept, we can design tough materials, not only hydrogels but also other things.” This principle now guides a new research field in tough soft materials and scientists around the world are following Gong’s footsteps. 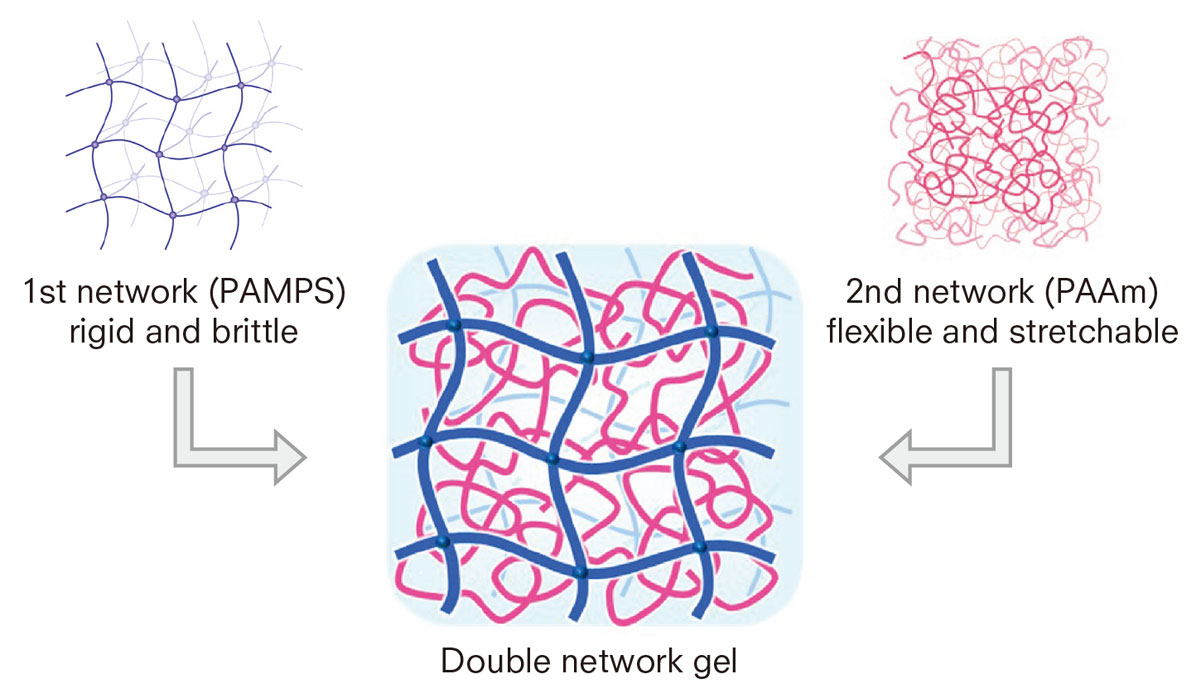 DN gels are synthesized by combining two networks with opposite characteristics: the first network is composed of rigid and brittle polyelectrolytes such as PAMPS, while the other is made of flexible and stretchable polymers such as polyacrylamide (PAAm).

Gong prefers using a “rough sketch” when pursuing her research. Such thinking came from Pierre-Gilles de Gennes, a Nobel laureate known as a pioneer in the soft matter field. Knowing him as a young scientist, she was fascinated with his “Impressionist” approach. Like Impressionist artists trying to capture a subject with simple brush strokes, de Gennes sought to obtain the essence of a physical matter based on a qualitative analysis instead of a numerical analysis. This style helped Gong make headway in her complex gel research.

“It’s not necessary to understand every detail quantitatively if I have a rough idea,” Gong said. “I’m a physicist, but I’m not very meticulous. So I think this research topic suits my personality.” 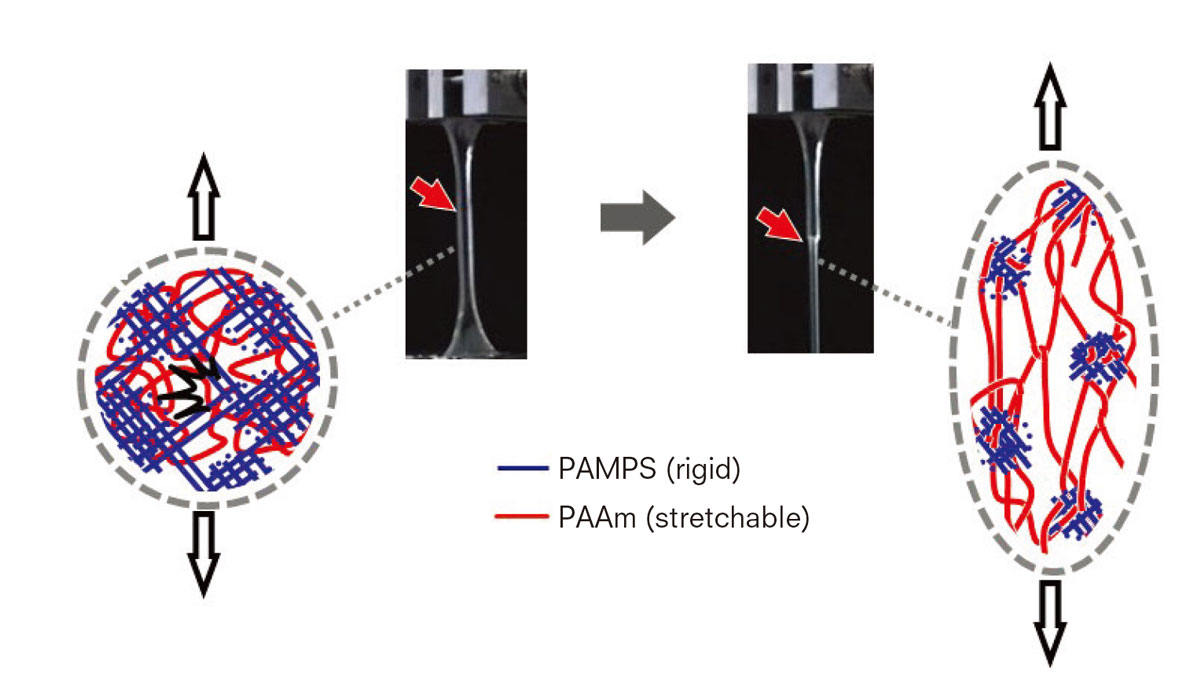 The rigid and brittle PAMPS network serves as a “sacrificial bond” by effectively dissipating energy while the soft and stretchable PAAm network sustains stress.

Efforts to make gels even tougher 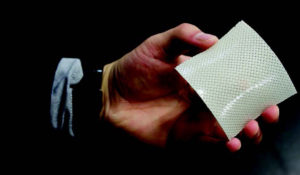 Based on the sacrificial bond concept, Gong’s team also has invented other types of gels including self-healing tough hydrogels. These efforts have raised hopes the gels could have practical real-world applications, notably in medical areas. Hydrogels share similar characteristics with biological tissues, including low surface friction, large thermal conductivity and high shock-absorbing ability. Demand is expected to be high for such biocompatible materials in nations with rapidly aging populations, such as Japan. Hydrogels have the potential to improve people’s quality of life, a key issue in the 21st century. “Producing biological tools is our ultimate goal,” Gong said. 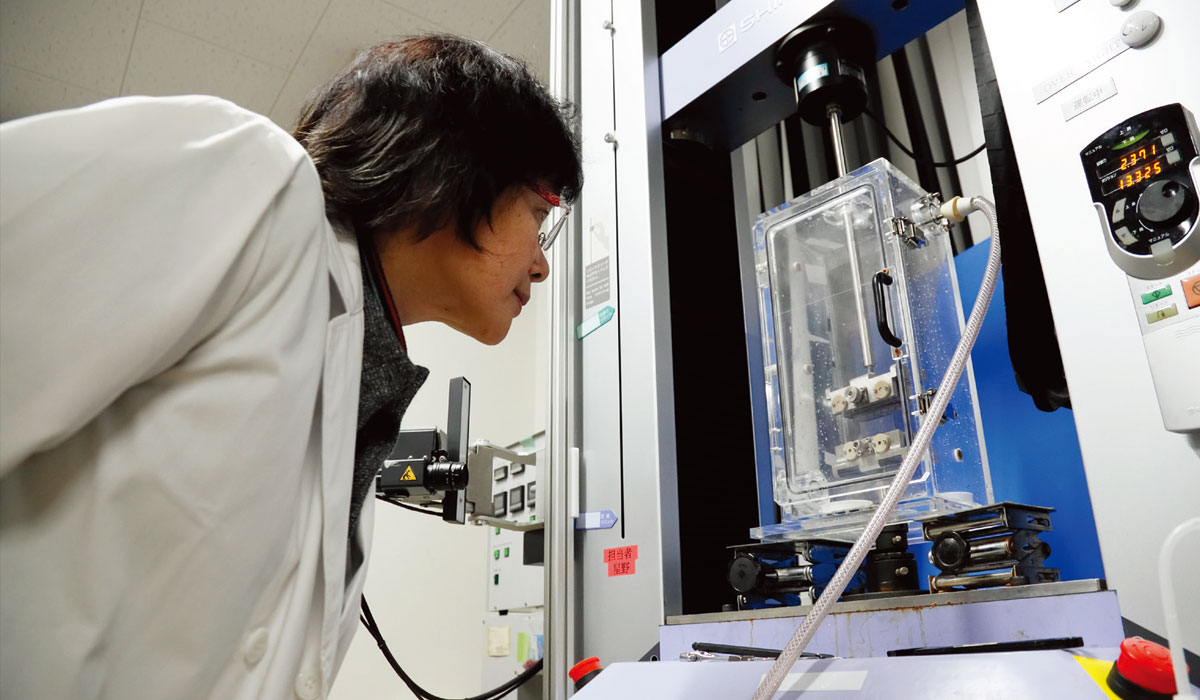