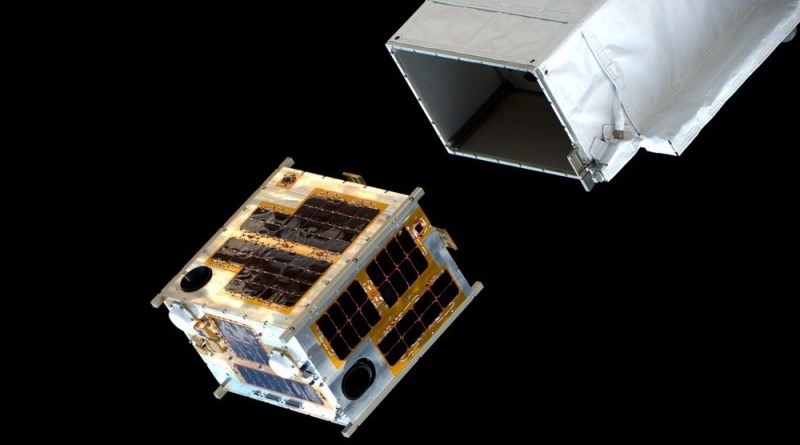 DIWATA-1 being released from ISS, taken by Astronaut Tim Peake.

“When the first communication opportunity over Japan came at around 7:33 (JST) on April 28, we succeeded in receiving radio signals from the satellite at the Tohoku University ground station (CRESST) and the state of the satellite was confirmed to be in good condition,” said Professor Kazuya Yoshida from Tohoku University. “Since April 29, we have been trying the initial check-out of each component with the performance evaluation of onboard cameras and the attitude control system of the satellite.”

DIWATA-1 has four onboard cameras for Earth observations, and multiple test images have been successfully taken and downloaded.

Picture 1a shows a test image of the Earth taken by the fish-eye monochrome wide-field camera (WFC) on board DIWATA-1 at 11:55 (JST) on May 6, 2016. Picture 1b, showing similar cloud patterns, was taken by the Japanese Meteorological Satellite five minutes before the Diwata-1 image was taken.  The geostationary weather satellite, Himawari-8, confirms the cloud is part of a prevailing frontal system over the Pacific Ocean near Japan. 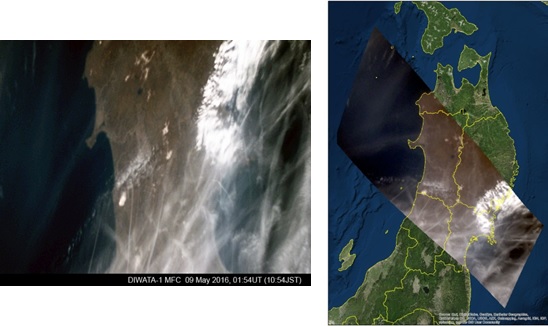 Picture 2a shows an image of the Tohoku area of Japan, taken by the medium field-of-view color camera (MFC) on board DIWATA-1 at 10:54 (JST) on May 9, 2016. Picture 2b shows a projection of the image on a geological map of the area. The satellite was moving over the Pacific Ocean and its attitude was manipulated to tilt in the direction of Sendai city. Sendai city is covered by clouds but Lake Tazawa and Oga peninsula are clearly visible on the left side of the MFC test image. 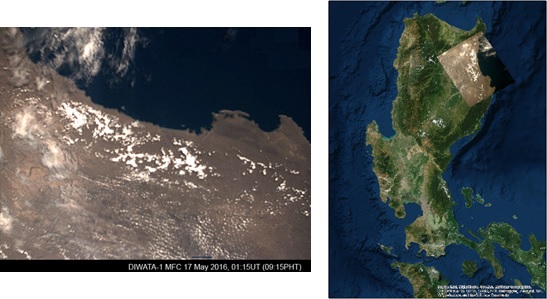 Picture 3a shows an image of the province of Isabela on the island of Luzon, the Republic of Philippines, taken by the medium field-of-view color camera (MFC), captured at 9:15 (PHT) on May 17, 2016. The test image captures a portion of the coastal seaboard of Isabela province, which includes parts of the municipalities of Maconacon, Divilacan and Palanan. Picture 3b shows a projection of the image on a geological map of the area. For this picture, the satellite was moving over the Luzon island and looked vertically down at the target area, with the pointing control toward the center of the Earth.

At this time, the satellite operation team is continuing the initial checks of the onboard components of the microsatellte. The images acquired in this phase – and included here – are used to verify the functionality and characterize the performance of the onboard cameras and other relevant sub-systems.  After extensive testing and characterization, DIWATA-1 is targeted to enter normal operation phase by August 2016. In this phase, it will be set to capture images on a regular basis to support the science mission objectives,  such as assessment of damages associated with disasters, surveying agriculture, fisheries and forestry, and studying environmental changes in the Republic of the Philippines.

The development of DIWATA-1 took aproximately one year with the Republic of the Philippines financing all development costs. The satellite is equipped with imaging sensors of four different fields-of-view including a fish-eye lens camera and a telescope with a ground resolution of three meters.

It is expected to provide remote sensing information to help address the needs of the Philippines for observing meteorological events such as typhoons and localized heavy rains, as well as studying agriculture, fishery, forestry and changes in the environment.

The onboard liquid crystal multispectral camera is an improved version of the one aboard the RISING-2 satellite, which was developed by Hokkaido and Tohoku Universities and launched in 2014. It is capable of taking images at 590 spectral bands, which is on par with cameras aboard large satellites, and can thus pave the way for the next generation, low cost yet high precision space applications.

Launch and orbit of DIWATA-1

DIWATA-1 took advantage of a charged launch opportunity provided by JAXA. Firstly, it was delivered to the ISS by the ‘Cygnus’ spacecraft launched from the United States on March 23, 2016. Secondly, it was released from the ISS ‘Kibou’ module on April 27 into outer space. Currently, it is in orbit with an altitude of approximately 400 km. Its orbital lifespan s expected to be around one and a half years. It will re-enter the atmosphere after that.

The ground station and Microsatellite Research and Instructional Facility

During the initial operation of DIWATA-1, the up-link of commands (UHF band) and the downlink of telemetry data (S-band) are being conducted at the Tohoku University station (CRESST). For the regular long-term operation, a ground control station with high-speed data reception in X-band is being set up in the Advanced Science and Technology Institute of the Department of Science and Technology (DOST-ASTI) of the Republic of the Philippines.

In addition, a Microsatellite Research and Instructional Facility (MRIF) is currently being established at the University of the Philippines Diliman as a hub for the country’s inter-disciplinary research and development activities in space technology.

University of the Philippines Diliman

Department of Science and Technology (DOST-PCIEERD)