Drug development in the 21st century is entering the era in which nucleic acid therapeutics and gene therapy play a large role. Professor Hideyoshi Harashima (Laboratory for Molecular Design of Pharmaceutics, Graduate School of Pharmaceutical Sciences) led his laboratory for more than 20 years in researching his own Drug Delivery System (DDS). With its outstanding technologies, Harashima’s research towards clinical application is in progress, supported by Hokkaido University’s Institute for the Promotion of Business-Regional Collaboration. 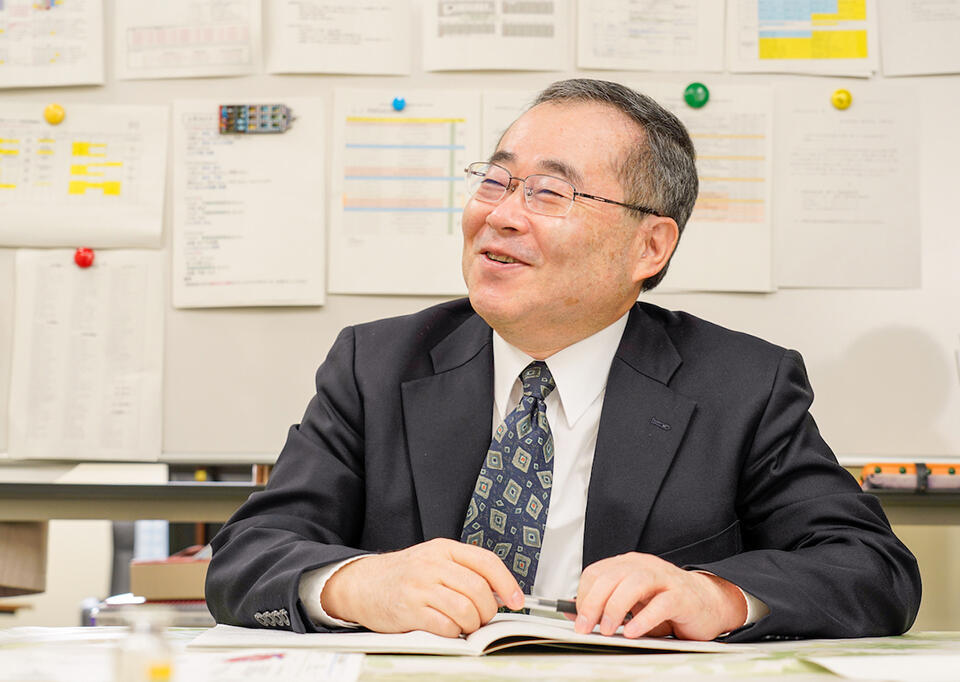 Q. What are the background and objectives of your project?

Hideyoshi Harashima: Tracing the history of drug discovery, we saw that the leading medicinal field shifted from molecular to antibody medicine in the 20th century. Currently, in the late 21st century, an extreme paradigm shift is occurring due to the emerging nucleic acid and gene-based treatments using nanomedicine.

Nucleic acid-based medicines are nucleic acids (DNA, RNA) that directly inhibit the functions of mRNA, or suppress its expression, which is the source of the target protein. This means that the treatment method has significantly changed from the conventional coping method to a more fundamental method by “uprooting the malignant part”. This brings a revolutionary change in medicine.

The key is the technique called Drug Delivery System (DDS), a system in delivering the desired amount of medicine to a desired location within the body. The drug takes the form of a capsule formed by lipid membrane and is delivered to the body by DDS. Pfizer’s COVID-19 mRNA vaccine, which is currently attracting global attention, also uses the lipid which functions surpass the lipids (Dlin-MC3-DMA) used by the aforementioned Onpattro®

We have been carrying out our own DDS research since 1999. Assistant Professor Yusuke Sato is leading a molecular design of functional lipids. We also have successfully developed a multifunctional envelope-type nano device (MEND) to deliver nucleic-acids to the liver with the world’s highest efficiency level.

MEND, which can break through pharmacokinetics and intracellular dynamics-related barriers, has been found to exhibit an extremely superior gene delivery ability in comparison to the lipids used for Onpattro®. It has been inviting attention from both domestic and foreign drug developing companies. 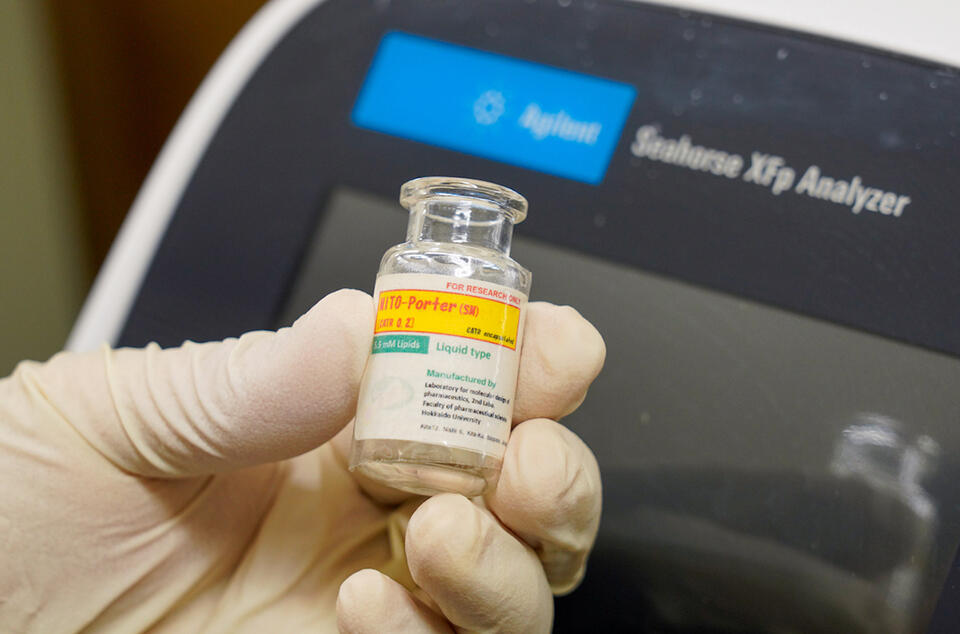 A reagent of MITO-Porter, a mitochondrial DDS developed by Harashima’s research team, to be delivered to joint research centers.

Q. What factors contributed to Hokkaido University’s status as one of the world’s leaders in the field of drug discovery?

Harashima: First, we took an early start in our research on the pharmacokinetics and intracellular dynamics control. It has been more than 20 years since I first came to Hokkaido University, during which Yusuke (Sato) was still just a student, absorbed in his research. The result of his research has bloomed to the current state.

Another factor is that the University provides complete support for the patent acquisitions for our drug discovery techniques. Acquiring patents for our research is essential to keep on pursuing unrivaled drug discoveries. Not only domestic patents, but international approval is also important.

We owe gratitude to all people who are concerned, including Specially Appointed Professor Atsushi Honma from Hokkaido University’s Institute for the Promotion of Business-Regional Collaboration, who handles the long and complicated procedures, such as the translation of patents to various languages. Owing to the help, we can give our undivided attention to the research. By obtaining a patent, it gave a great sense of security to any interested pharmaceutical companies.

Certainly, the patent acquisition and other entailing procedures cost a significant proportion of the university’s budget. So, without Hokkaido University’s generous support, I think we would not have obtained any progress. I am glad that we can give back to the university.

Q. Have the drugs developed by using your technology been commercialized?

Harashima: Generally, it takes at least 5 years for nanomedicine provided by our researchers to have a global release after undergoing through multiple layers of clinical trials. Right now, the entire laboratory is increasing the number of nanomedicines that can be released to the practical line.

At the same time, questions on the ethical standards in dealing with new generation of technologies, such as genetic modification, will arise. I think it is important to continue the discussions on how to use them safely and securely.

Again, nucleic acid-based and gene therapeutics are radical treatments by uprooting the malignant origins of the diseases. It is a big leap for humankind, because these treatments can cure patients directly on a level that is different from the usual medical practice. I hope that from this project young people can see that Hokkaido University is working themselves to their bones in making the University the Mecca for such gene-based therapy.

Q. What are the charms of drug development that can attract young people?

Harashima: “How far can we make our dream come true  just like in science fiction stories?” I think that kind of pursuit of technology is amusing.

Although it took some time, as we became more able to talk about medical applications with  the backing from technological progress, the university and companies expressed more understanding and interest, which further improved our research environment.

Brimming with curiosity, students gather here thinking of this place as a place to do interesting things. I feel that such a chain of curiosity shaped the current drug discovery in Hokkaido University. 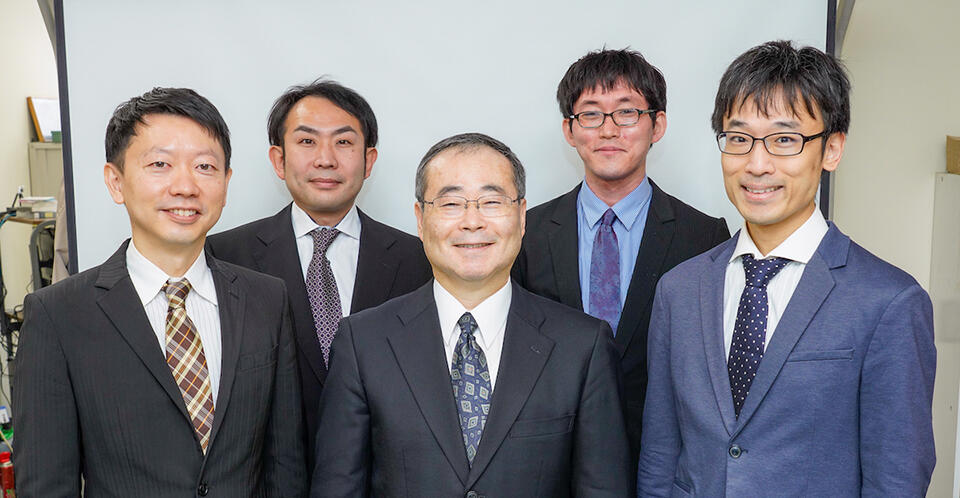 The original interview, in Japanese, is available here.