Hydrogels as inducer of cartilage regeneration 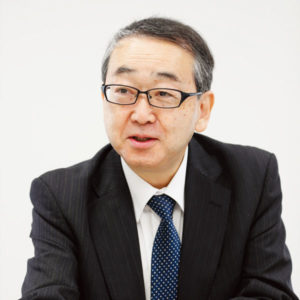 Kazunori Yasuda, an orthopedic surgeon of the Hokkaido University Hospital, had long been looking for a material suitable for cartilage substitute to treat orthoarthritis when he encountered the new hydrogel in 2003. It was Professor Yoshihito Osada and his Associate Professor Jang Ping Gong who visited Yasuda and asked whether the newly developed hydrogel could be used for medical purposes. At that time, Osada was conducting research on various gels, and Gong had succeeded in making double-network (DN) gels which were extremely tough and defied the notion of gels being weak. 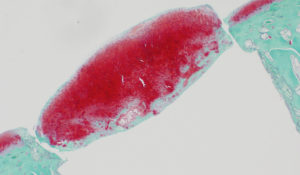 A thick mass of cartilage-like tissue growing out of the defect in a rabbit knee.

“When I touched the gel, I instinctively thought this material is cut out for a cartilage substitute. It had a low sliding friction and high elasticity,” Yasuda said. This encounter set out his research on the DN gels as biomaterials.

During the years of attempts to optimize the DN gel, however, Yasuda came across an even more astonishing discovery. “ It was a total coincidence,” Yasuda recalled. His research team was conducting in vivo experiments, implanting a DN gel plug as an artificial cartilage, consisting of poly-(2-acrylamido-2-methyl- propanesulfonic acid; PAMPS) and poly-(N,N’-dimethyl acrylamide; PDMAAm), into an osteochondral defect created in a rabbit knee. It was to evaluate whether the implanted artificial cartilage has detrimental effects on the normal cartilage on the opposite joint surface. “When I saw what my student said was a ‘failed sample,’ a thick mass of regenerated cartilage was growing out on the DN gel.”

In the failed sample, the patella, or the kneecap, on the opposite side was dislocated, allowing the cartilage-like tissue to grow on the DN gel. “Since it had been believed hyaline cartilage could not spontaneously regenerate in vivo, I was really startled,” Yasuda said.

Although Yasuda was first interested in the DN gel as a cartilage substitute, the unexpected discovery prompted the team to further investigate the gel’s regenerative property. In their following experiments, a plug of PAMPS/PDMAAm DN gel was implanted at the bottom of a large osteochondoral defect in a rabbit knee joint, leaving a cavity above the gel vacant to allow tissue regeneration.

A DN gel plug was implanted at the bottom of a osteochondoral defect in a rabbit knee joint, leaving a cavity to allow tissue regeneration.

Two weeks after the implantation, a cartilage-like tissue appeared near the cavity wall. The regenerated tissue continued growing, and, at four weeks, reached a sufficient volume to fill the defect. On the other hand, the untreated defect was filled with fibrous and bone tissues even after four weeks.

The team then examined gene expressions in the regenerated cells, which confirmed high expressions of proteoglycan, type-2 collagen, Aggrecan, and SOX9 mRNAs, indicating they were indeed cartilage cells. In 2009, the team published its finding in Macromolecular Bioscience. It was the first academic report that the DN gel could spontaneously regenerates hyaline cartilage. “Our discovery gave a significant modification to the commonly-established medical concept that cartilage cannot regenerate,” recalls Yasuda.

In the following years, while finding the regenerated tissue has a similar gene expression profile to that of normal cartilage cells, the team also looked into the mechanism of regeneration. This research led to the recent discovery that the PAMPS gel, a component of the DN gel, activates TGF-β/BMP signaling pathway in mouse chondrogenic cells and this activation plays a pivotal role in the cartilage differentiation.

Most recently, to make a step towards a clinical research, Yasuda’s team conducted experiments using a sheep model which proved the short-term efficacy of the cartilage regeneration strategy using the DN gel.

Going back to the beginning, Yasuda also continues to work on the DN gels as a cartilage substitute to establish a new treatment for orthoarthritis. Currently, his team conducts a pre-translational study with a company to develop an artificial cartilage. If such method is established, it will present a concept different from current treatments using tissue-engineered cartilage, cell-seeded scaffold-material, or acelluar polymer scaffolds with signaling molecules. With the dual properties of the DN gel, as substitute or inducer of regeneration, Yasuda is bringing novel strategies to articular cartilage treatments.

Beside medical application, hydrogels has a major potentiality as a tool to unravel the mechanism of cellular phenomena and therefore contribute to basic research, according to Yasuda.

“Hydrogels are much simpler than a complex environment within the body, and yet able to elicit cellular responses. By using materials like hydrogels, we might be able to unlock the mystery of life much faster,” Yasuda explained.

In fact, since 10 years ago Yasuda has been proposing what he calls “material genomics,” which tries to exhaustively investigate changes in cells and gene expressions that occur at the contact with varying materials.

As an example for this, Yasuda cited a collaborating research led by Professor Shinya Tanaka to induce the creation of cancer stem cells with a DN gel and then to discover the mechanism involved in reprograming ordinary cancer cells to stem cells.

“I want students to know that materials can have unpredictable effects,” Yasuda said. “I want them to broaden their perspectives as they conduct research, while working jointly with researchers from different fields. A new idea can lead to a completely unexpected result, engineering a breakthrough.” 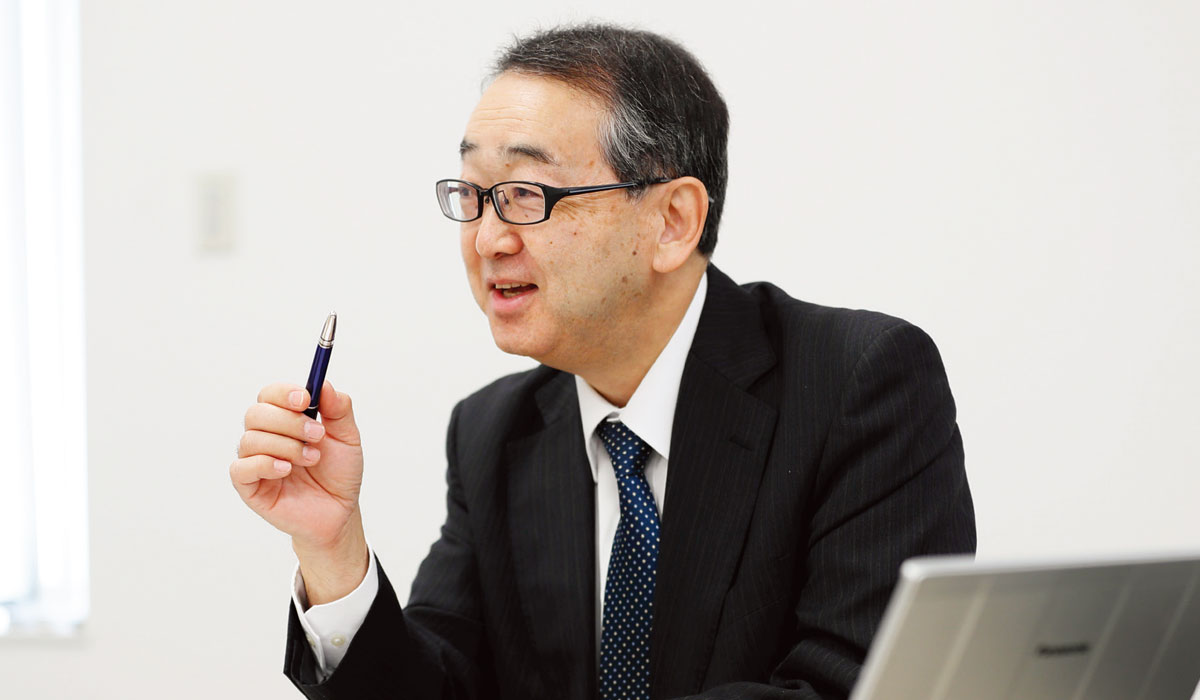