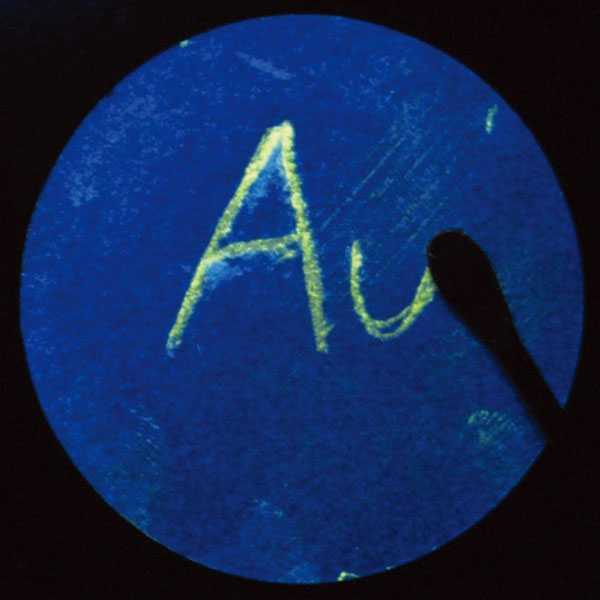 A mechanochromic compound on a filter paper changed its luminescent color from blue to yellow when scratched with a spatula.

The past decade saw rapid growth in the research of mechanochromic materials as interest soared in their mechanisms and potential applications. Mechanochromism is a phenomenon of color change that occurs when chemicals in solid state are subjected to mechanical stress such as grinding, rubbing, milling and crushing. The “smart material” could potentially pave the way for a wide range of applications such as bioimaging reagents, pressure-sensitive sensors and security inks that can detect tampering in packaging. 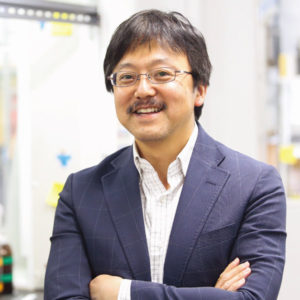 Hajime Ito of Hokkaido University’s Organoelement Chemistry Lab is one of the world’s leading scholars in the field of mechanochromism. Ito had been researching metal complexes as an academic interest, but it was only around 2007 when he started to research mechanochromism. One day, Ito asked one of his master’s students to report on catalytic activity in a certain gold(I) complex.

“The complex did not show any catalytic activity at all, so we decided to investigate its crystal’s luminescent property because it was widely known that gold(I) complexes emit light,” Ito said.“When we applied mechanical stimuli to the crystals under UV light, a luminescent color change was observed. I was amazed and thought this would be an interesting subject to pursue.”

In those days, little was known about which molecular crystals show mechanochromism, or how molecules should be crystalized to exhibit this property. It was almost impossible to predict what structure organic compounds would take when they are crystalized, let alone to conduct molecular design based on the principles behind mechanochromism.

Crystals of numerous types of gold(I) complexes were made at Ito’s laboratory and subjected to mechanical stimuli to find out how light wavelengths emitted by crystals will change. Ito’s team was not trying to make elaborate gold(I) complexes, but those with a simple structure with some chemical modifications. The aim was to identify a law governing mechanochromism to find out which molecules possess this property.

A small pit (white arrow) was introduced by pricking the fixed sample of phenyl(phenyl isocyanide) gold(I) complex with a needle. The phase transition gradually spread over the entire crystal after 9 hours and changed its color. (Ito H., et al., Nature Communications, 2013) 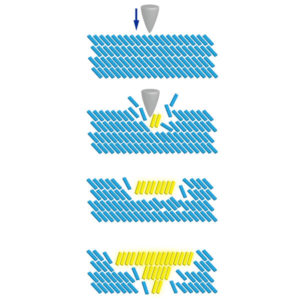 After extensive experiments, Ito’s team discovered a phenomenon called “molecular domino transfor- mation” in which a small stimulation can change the molecular level structure, setting off a phase change of the crystals. This phase change is amplified through a self-replication mechanism, causing a drastic change in the crystal properties.

“So far, around 500 mechanochromic molecules, including ours, have been reported,“ Ito said.

“Of them, 90 percent involve the transformation from crystals to amorphous solids, which is a non-crystal state. The phenyl(phenyl isocyanide)- gold(I) complex we developed, on the other hand, exhibits a crystal-to-crystal phase transition triggered by a small mechanical stimulus. We observed the domino transformation for the first time in 2013.”

The team found a rapid crystallization causes gold(I) complexes to be twisted, allowing them to transform to more stable, less twisted crystals upon a small stimulation. The phase change first occurs at the initial contact area and subsequently progresses through the entire crystal. The phase change was accompanied by a drastic luminescence color change caused by the switching of the intermolecular interactions.

This finding represented a significant step forward because Ito’s team was able to shed light on one aspect of mechanochromism, which had long been shrouded in mystery. “Theoretically speaking, it could lead to the development of a supersensitive sensor that can detect any change occurring even in a single molecular level,” said Ito. “Furthermore, the results can be used to help prevent medicines and organic semiconductors from degrading due to small external stimuli.”

In 2016, Ito’s team synthesized 48 organic compounds containing gold atoms or gold(I) isocyanide complexes – 28 of which were found to be mechanochromic, emitting changing colors such as blue, green, yellow and orange upon stimulation. Detailed analyses of the crystals revealed various molecular arrangements as the key to understanding their luminescent properties.

Since then, Ito’s team has been able to strategically conduct molecular design – albeit roughly – based on these molecular analyses, resulting in the successful synthesis of a string of new mechanochromic molecules.

Emitting invisible light after being ground up

In 2017, the team found a gold compound called 9-anthryl gold(I) isocyanide complex, which produces a visible blue light but emits invisible infrared when ground to a fine powder. This was the first time a mechanochromic molecule was found to emit invisible light after being ground up. 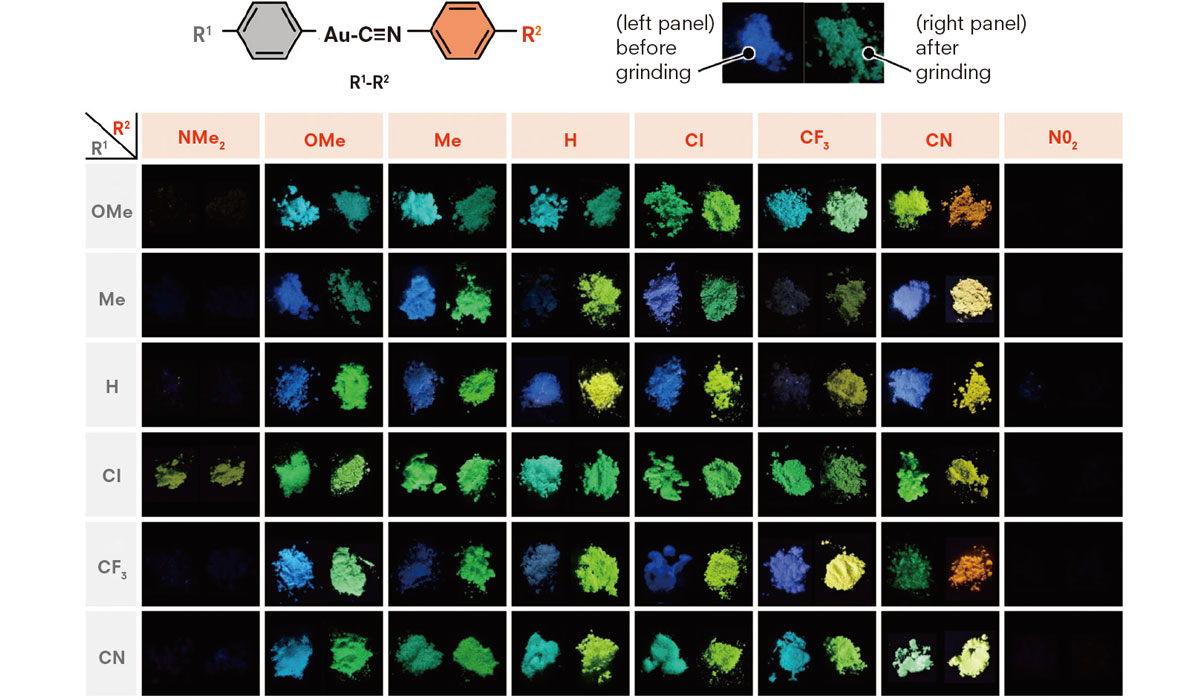 Forty-eight compounds containing gold atoms or gold(I) isocyanide complexes were developed by Ito’s group, 28 of which were found to be mechanochromic. (Seki T. et al., Journal of the American Chemical Society, May 10, 2016)

“We examined how the light wavelength changes when gold atoms in gold(I) complexes bond with phenyl, naphthyl or anthryl groups, on the assumption that the wavelength will become longer after a crystal structural change,” Ito said. “All complexes we examined emitted light with a longer wavelength, but the complex that bonded with an anthryl group produced a much longer wavelength than we expected – changing from blue light to infrared.”

Further research on mechanochromic molecules is necessary before material made of them can be used for practical applications. In particular, Ito said gold(I) complexes must be made durable and stable at room temperature. The gold(I) complexes he developed so far disassemble easily and must be stored in a refrigerator.

Ito intends to focus on fundamental research into mechanochromic molecules to unlock more of their mysteries and spearhead global efforts to unravel the principles governing mechanochromism. 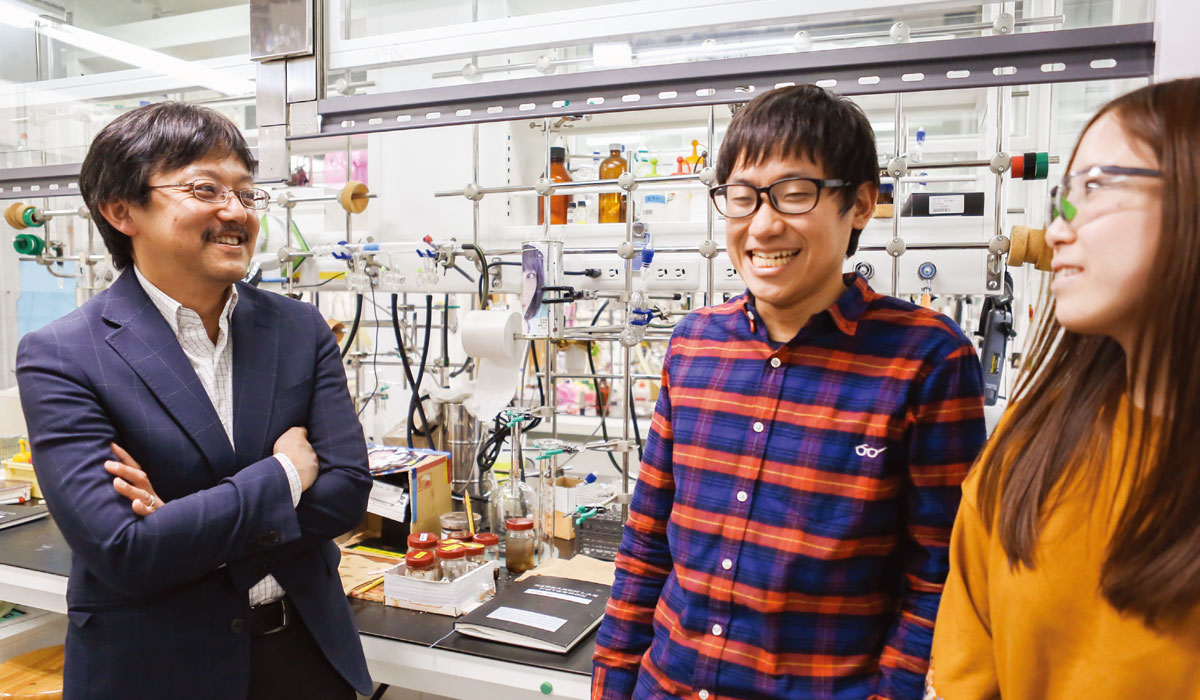