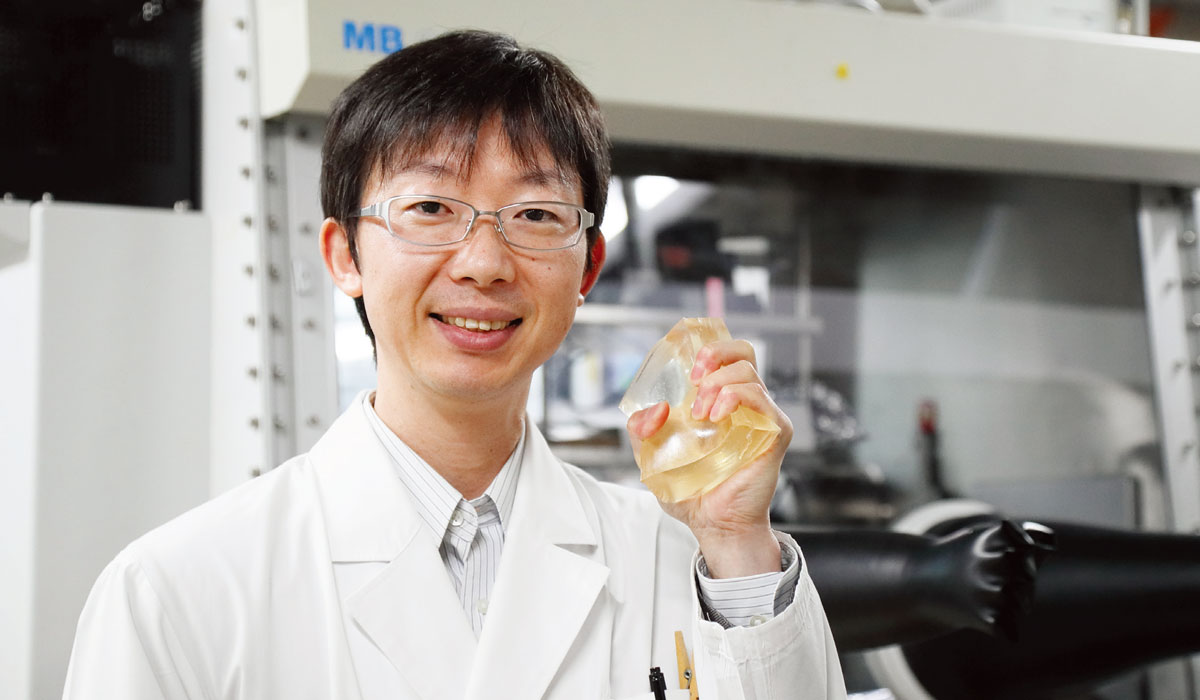 Professor Takayuki Kurokawa encountered the new-type hydrogel that was extremely tough when he was conducting an experiment to reduce surface friction of gels.

It started accidentally in 2000. Takayuki Kurokawa had a habit of squishing gels used for lab experiments. He liked the feeling of doing so with his fingers. One day, he found a gel so tough that he couldn’t break it even by applying extra weight when he held it.

“It was very tough,” Kurokawa recalled. “I was excited because I had never touched such a tough gel before.” This chance discovery led to his laboratory’s development of double network (DN) gels that have excellent mechanical properties.

At that time, Kurokawa, who is now a Hokkaido University professor, was a first-year master’s student and conducting an experiment to reduce friction by forming polymer brushes on the gel’s surface. Kurokawa presented the tough gel at a lab meeting only because a device to measure friction happened to be out of order and he had nothing but the gel to report. His finding was immediately recognized as a big one and prompted faculty members of the lab to make special arrangements to further investigate the gel.

“I never imagined this could be a breakthrough. I had no clue why the gel became so tough,” Kurokawa said.

Based on the way Kurokawa created the gel, skilled lab researchers sought to optimize the process and conditions for toughening gels by testing various polymer combinations and adjusting the amount of chemical reagents. After years of experiments and theoretical calculations, the team figured out the toughening mechanism. DN gels are made by combining two networks of polymers, one of which is rigid and brittle while the other is flexible and ductile. The team discovered that the rigid and brittle network dissipates energy when it breaks and gives DN gels their toughness through these “sacrificial bonds.” Discovering the sacrificial bond principle was a major leap forward in gel research. However, the full picture of the material’s complex properties remains unknown. Kurokawa said, “That’s kept me interested.”

Kurokawa pointed out that a “lack of experience” often can be an advantage in making new breakthroughs by challenging established science unknowingly. Researchers without preconceived ideas tend to find “seeds” that could yield something new and unexpected. He said the strength of the lab, currently led by Professor Jian Ping Gong, comes from its teamwork in which premature discoveries are followed up by faculty members and senior researchers who know ways to explain the phenomena with theories and advanced experimental skills.

Kurokawa also said the lab allows researchers to pursue their curiosity. This culture was cultivated largely by Yoshihito Osada, a former vice president of Hokkaido University who once led the university’s gel research. Kurokawa remembers Osada often told his students not to aim for their research goals alone and encouraged them to make and enjoy “detours.” As a result, researchers at the lab feel free to investigate new topics, including those unrelated to their original research.

The field of soft matter is characterized by its interdisciplinary nature that brings together people with various backgrounds, including physicists, chemists, engineers and biologists. This often enables a wide range of experiences, standpoints and approaches to generate synergistic effects. Kurokawa saw such robust interplay firsthand as Osada, a chemist, and Gong, a physicist, persuaded researchers from different areas of expertise to collaborate on gels.

“We’ve continued to embrace this collaborative culture. We always try to work as a united team,” Kurokawa said. 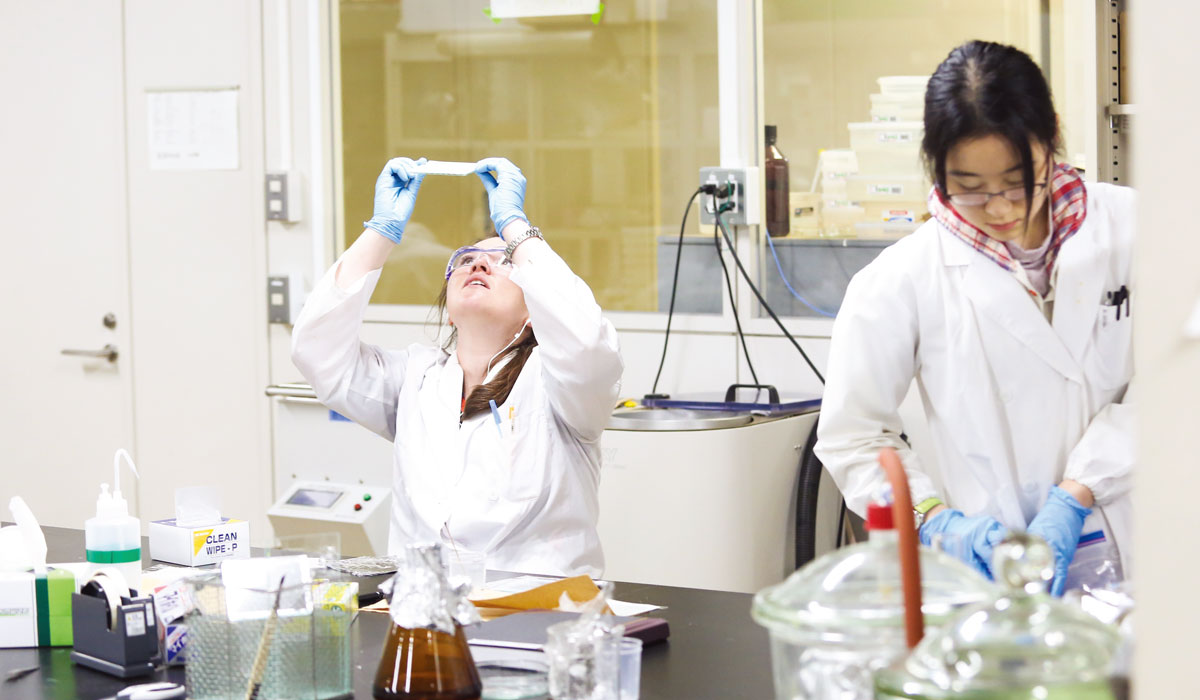 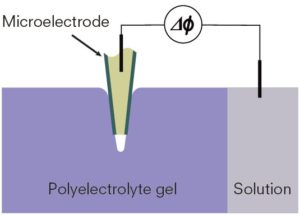 The microelectrode with a very thin tip wall is introduced into a gel using a micromanipulator for precise measurements.

Kurokawa’s research now focuses on using a microelectrode technique to measure the spatial distribution of the electric potential of polyelectrolyte hydrogels. He described gels as “materials that cannot be seen quantitatively” because of their complex and heterogeneous structures, so establishing a measurement method for the quantitative study of gels has been long awaited.

In 2016, Kurokawa reported a new method to gauge the ionic concentration in hydrogels. This method offers a powerful tool to characterize the internal structure of gels and further investigate the mechanisms of sacrificial bonds. “Measuring the behavior of polyelectrolytes quantitatively is challenging. But it’s significant that we’ve introduced a new measurement method to the field of soft matter,” Kurokawa said.

Local ionic concentrations change when stress is applied, so their technique would be instrumental in developing various sensors. Kurokawa envisions a sensor with the ability to detect pressure distribution and strength, similar to that of a human finger. 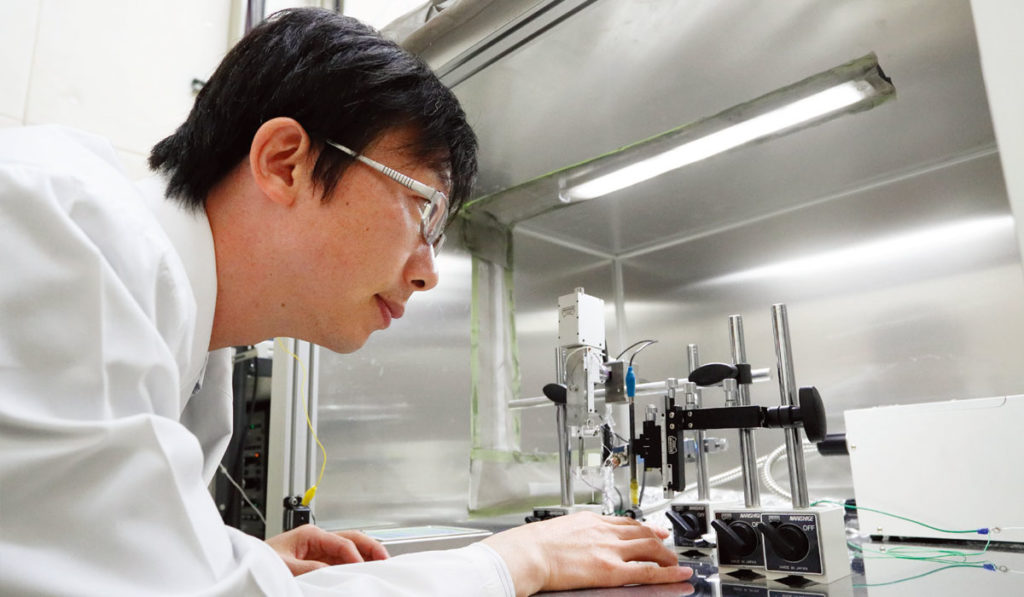 This new device enables precise measurements of local ionic concentrations in hydrogels, which provides clues to its internal structure.

Kurokawa’s focus is primarily on the fundamental science of gels. Identifying social needs is vital to setting the course of his research, so meeting and listening to people in different areas is essential.

“Finding out the needs of people who want to use gel as a material makes me realize what we don’t know about gels as well as what we should do with them,” said Kurokawa, who frequently participates in events where he meets company representatives.

It is said to take 40 years for a material to be put into practical use after its invention. Efforts by private companies also will be crucial for turning gels into materials that are widely used.

“As basic scientists, our role is to present principles behind a material, but I’m willing to help companies speed up the process of adopting it for industrial use,” Kurokawa said.