Dr.Md. Anamul Haque, a Bangladeshi chemist, spent many hours at his Hokkaido University laboratory in 2010 trying to produce a hydrogel with a hierarchical structure, a daunting challenge that had to be overcome to make the gel exhibit magnificent colors when subjected to mechanical stimuli.

“The most difficult part was to make the bilayers of surfactant in a precursor solution aligned and layered in a gel,” recalled Haque, who was a doctoral student at the university at that time. “I tried many kinds of gels, probably 20, and different methods for six months.” He was eager to make such a gel, which shares many properties with biological soft tissues, because it could pave the way for making artifcial blood vessels as well as sensors that can be used for studying artificial tendons.

The breakthrough came when Haque applied strong shear, a flow induced by force, to a precursor solution containing the surfactant dodecyl glyceryl itaconate (DGI), acrylamide, and a cross-linker prior to the polymerization. The shear flow allowed lamellar bilayers of self-assembled DGI to align in one direction, while stacking the bilayers periodically to give the gel a thin photonic crystal structure. His gel has as many as 4,000 layers.

Haque stayed at the university as a doctoral student and a postdoctoral fellow through 2013 before returning to the University of Dhaka, where he worked as an assistant professor. Haque returned to Hokkaido University in 2015 for a two-year program under the JSPS Postdoctoral Fellowships for Research in Japan. He studied various functions of the gels he developed and an optimized method to synthesize the gel. The new suction method to apply the shear flow is effective for making a uniform DGI lamellar phase.

Bilayers of DGI are stacked periodically with polymerized AAm in between the bilayers (far left). By applying strong shear flow prior to polymerization, bilayers of DGI align in one direction giving the gel a photonic crystal structure. (Haque M.A. et al., Soft Matter, June 15, 2012) 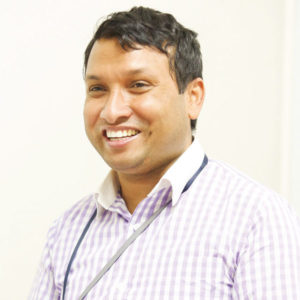 Haque became fascinated with hydrogels after learning of double network gels being developed by Professor Jian Ping Gong’s team. “It was amazing because the gels I knew were very weak, like fruit jelly. But her gels were very tough and strong,” Haque said.

Under Gong’s instruction, Haque started conducting research on gels that have structural color and also change color when subjected to mechanical stimuli. The gels exhibit structural color by multilayer interference according to Bragg’s law of diffraction.

The hydrogel Haque developed with the shear flow method has additional functions related to structural color and beyond. First, the gel’s color can be reversibly tuned by compressive and tensile stimuli, changing the color from red to blue, depending on the intensity of force applied perpendicular to the bilayers. How the gel emits color is influenced by the alignment of bilayers, the number of layers, and the distance between layers.

Due to the uni-axial orientation of the bilayer, the gel possesses superb functions that have never been realized before, such as anisotropic modulus and one-dimensional swelling, which are properties of biological tissues.

“Anisotropic means that if you change its direction, it can change its property,” Haque explained as he showed the gel. “If you look at an angle of 90 degrees to the gel surface, it is orange or red. But if you reduce the angle to about 50 degrees, it becomes blue.”

That the bilayer has one-dimensional swelling is also important for making the gel closer to biological tissues. “The bilayer can swell vertically, but not horizontally,” he said. “One-dimensional swelling is also important for the ensuing materials that will be created. In the field of material engineering and mechanics, this type of system could be considered for modeling and designing functional materials for various purposes.”

Furthermore, the gel is reversible when subject to compression and tensile stimuli, a property most hydrogels lack. Haque’s gel is comprised from rigid, hydrophobic polymeric-DGI (PDGI) and soft poly-acrylamide (PAAm), and has a typical double network (DN) structure.

The bilayers sustain compression and tensile stress and they yield at a large stress due to the dissociation of the hydrophobic packing of PDGI molecules. The molecules recover to the association state after removal of the stress. Thus, the rigid bilayers serve as reversible sacrificial bonds to delocalize the stress and enhance crack resistance.

“Even if molecules are disassociated, they come back to where they were after the stress is released,” Haque said. The recovery has two stages: Nearly 80 percent is recovered quickly after unloading, which is followed by a slow recovery stage that takes about 15 minutes. “The slow recovery could be an issue during practical use but I have improved the immediate recovery after unloading by adding a third polymer to the gel. Furthermore, a student of our team has shown the recovering process and color tuning response can be significantly shortened to a few milliseconds by hydrolyzing the PAAm network of gel.”

The gel’s color can be reversibly tuned by compressive stimuli, changing the color from red to blue, depending on the intensity of force. (Haque M.A. et al., Advanced Materials, September 13, 2010 ) 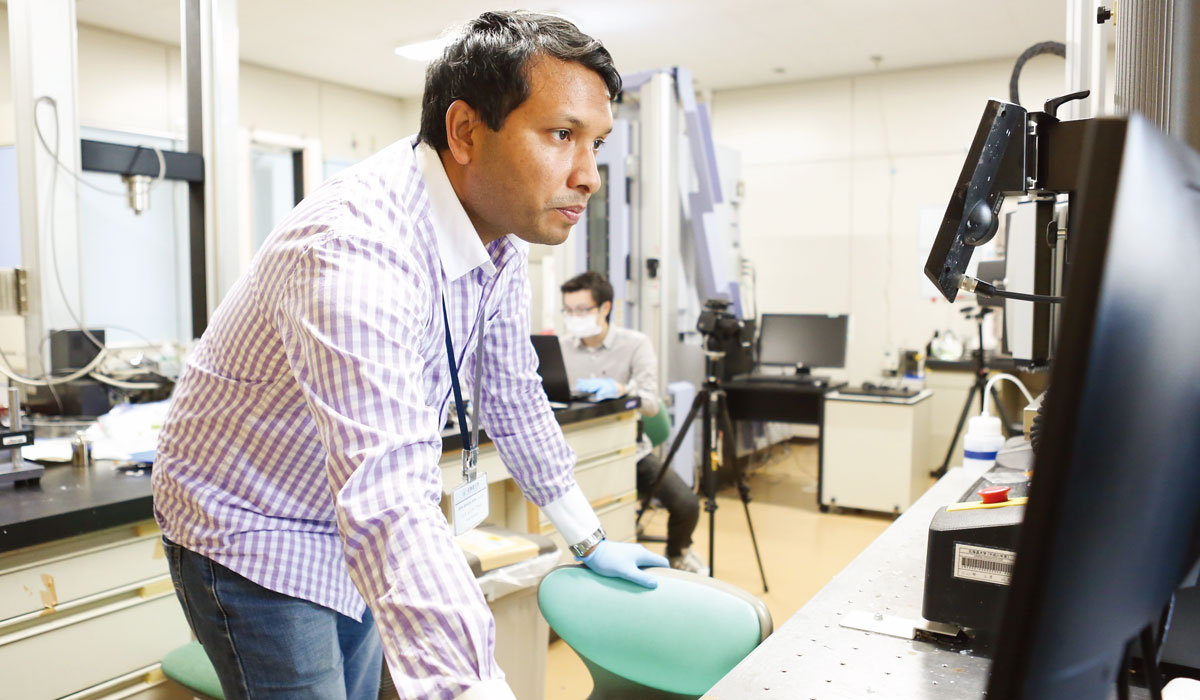 Although the gel has a vital reversible function, it is not as strong as other gels developed by this lab. Haque believes the anisotropic gel must be stronger before it is ready for practical application. The chemist also wants to devise a method for producing much bigger gels from its current size–several centimeters wide and long and one millimeter thick.

Haque said possible applications of his gel include using it to make artificial blood vessels as well as using its ability to change color as a sensor to gauge the local force in tendons or muscles.

In December 2017, Haque returned to his position at the University of Dhaka, but he will conduct further research on hydrogels in collaboration with Gong.