Group photo of the participants

The forum started in 2006 under the collaboration of the Japan-Russia Youth Exchange Center and universities in Japan. Its purpose is to enable youth from Russia and Japan who will lead the next generation to address the various problems facing both countries through frank heart-to-heart discussions. This is the first time in 10 years the forum has been held at Hokkaido University.

30 Japanese students from 20 universities in Japan (including 8 students from Hokkaido University) and 26 young Russians from 20 Russian associations and institutions participated. Over the 2 days, they intensely discussed the general theme of the event “Inter-Regional Collaboration for the Expansion of Economic and Human Interactions.”

After the opening ceremony, Professor Akihiro Iwashita from Hokkaido University’s Slavic-Eurasian Research Center gave a keynote speech on the topic of “A Foreseeable Future on the Japan-Russian Relations: Views from Hokkaido” so that the audience could more deeply understand the relationship between Russia and Japan. This was followed by keynote reports from representative students from both countries. 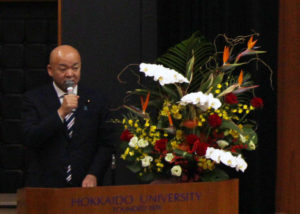 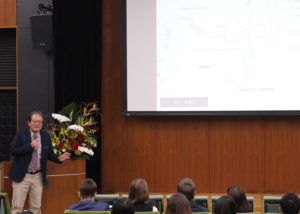 For the afternoon group session, topics surrounding “Regional Redevelopment and Revitalization,” “Multicultural society and Cultural Diversity,” and “Tourism, Transportation and Logistics” were actively discussed by the participants.

The welcome party in the evening provided ample opportunities for the participants to enjoy various delicacies and chat with each other. The folk group “Wadachi” also performed at the party and participants enjoyed their taiko and local folk songs.

On the morning of 21st, in groups the students gave presentations about future relations between Russia and Japan. Later on during the closing ceremony, Executive and Vice President Nishii Junji gave the closing address and handed certifications to the participants.

The participants made friendships transcending boundaries at the forum. Their collaborations allow for brighter future relationships between Japan and Russia. 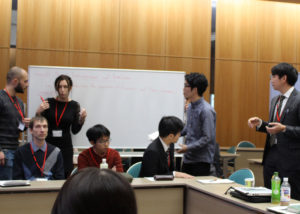 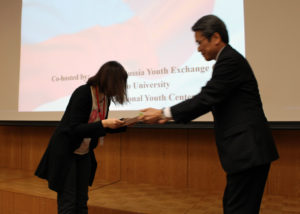 Presentation of certificates from Executive and Vice President Nishii