The unearthed bones of “Mukawaryu,” Japan’s largest complete dinosaur skeleton, have now been prepared and pieced together, giving us a fuller and clearer image of the 72 million-year-old dinosaur.

Excavations of “Mukawaryu,” the largest complete dinosaur skeleton in Japan, began in 2013 in the Hobetsu district of Mukawa Town on Japan’s northernmost island of Hokkaido by the Hokkaido University Museum and Hobetsu Museum research teams. Although many bones have not yet been identified, the majority have been and those which can be pieced together now present a more accurate depiction of the dinosaur’s anatomy.

“Mukawaryu” was recovered from  marine deposits dating back to the Late Cretaceous Period around 72 million years ago. The skeleton has been identified as a duck-billed dinosaur (Hadrosauridae). These herbivores thrived in Eurasia, North and South America, and Antarctica. 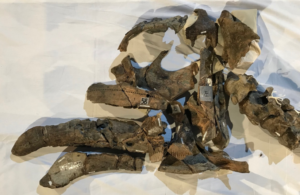 The “Mukawaryu” skeleton revealed in 2017 was defined as a complete skeleton, as it contained more than 50% of the bones, but now an estimated 60% of the bones have been confirmed as well as 80% of the entire expected skeletal volume. With a significant amount of cranial bones pieced together in addition to more shoulder, forelimb, hip, hindlimb, and backbones, the skeleton is now more discernable.

“There are still many unidentified bones and fossils that need to be restored,” said Associate Professor Yoshitsugu Kobayashi of the research team. “We will continue researching “Mukawaryu,” analyzing its bones, and unraveling more details of this creature. We also hope to further clarify its systematic position, determine any related species and the ecology of the environment it lived in.”