After decades of research, a research team has discovered the key receptor molecule that enhances the infection of the influenza A virus, providing a novel target for anti-flu drug development.

In the latest study published in Cell Host & Microbe, the team has discovered that the Ca2+ channel, a transmembrane protein that allows Ca2+ to move across the cell membrane, is the key receptor molecule for IAV infections. Furthermore, treating human cells with calcium channel blockers (CCBs), which are commonly used as anti-hypertension drug, significantly suppressed IAV infections.

In experiments using cultured human cells, the team found that IAV binds to the Ca2+ channel on the cell’s surface to trigger an influx of Ca2+, followed by entry of the virus and infection. Knocking down Ca2+ channels inhibited IAV-induced Ca2+ influx and virus entry. They also revealed that sialic acid on the Ca2+ channel is crucial for the virus to bind.

Finally, the team tested the effect of CCB on IAV infections using mice. When they treated the animals with CCB intranasally, a significant and dose-dependent reduction in the amount of replicated viruses was observed. When the animals were treated with high amounts of IAV, administration of CCB significantly prolonged survival and allowed weight recovery of the survivors whereas the untreated group died within five days. 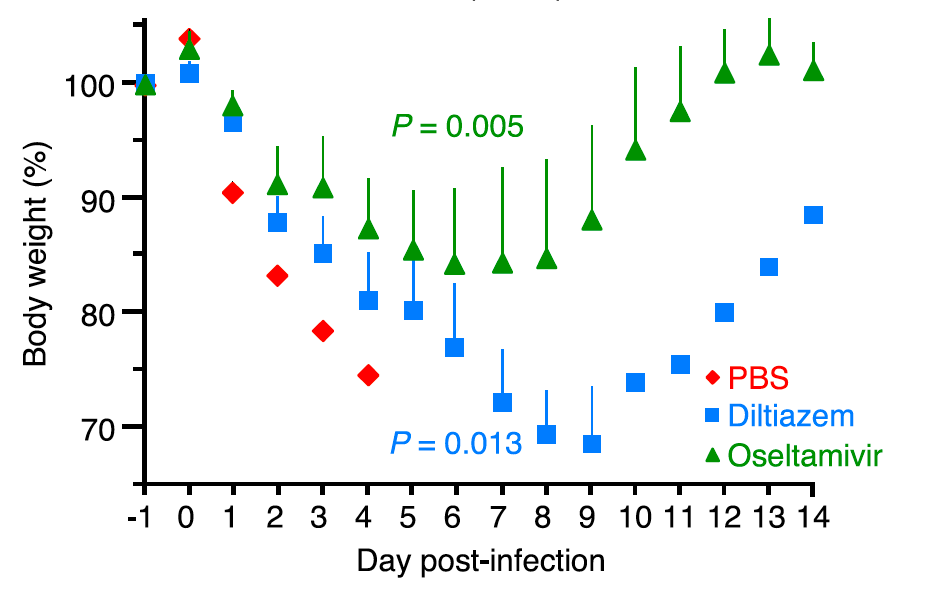 “There were cases when the suppressive effect of CCB on IAV infections was comparable to that of an existing anti-flu drug. We expect that the interaction between IAV and the Ca2+ channel could be a novel and important target for future drug development,” says Yusuke Ohba.

This study was supported by grants-in-aid from the Ministry of Education, Culture, Sports, Science and Technology of Japan (#26115701 and #15H01248), Japan Society for the Promotion of Science (#26293041 and #16H06227), Japan Agency for Medical Research and Development (JP17fk0108124j0601), Mochida Memorial Foundation for Medical and Pharmaceutical Research, the Waksman Foundation of Japan, the Sumitomo Electric Group Corporate Social Responsibility Foundation, and SENSHIN Medical Research Foundation.