Hokkaido University scientists have shown that Interleukin-34 is a prognostic marker and drug target for Triple Negative Breast Cancer.

Breast cancer is the most common cancer among women across the world, affecting 28.9% . Depending on the combination of cell receptor molecules present on the surface of the cancer cells, breast cancer is classified into one of three types: Luminal A, Luminal B and HER2+. The receptors determine which hormone the cancer is dependent on for survival, and thus indicate which drugs can be used to treat the cancer. A fourth type of breast cancer, Triple Negative Breast Cancer (TNBC), does not have any of these three receptors. This type of cancer does not respond to standard treatments and the prognosis is generally poorer than for other types of breast cancer.

A team of scientists from the Institute for Genetic Medicine (IGM) at Hokkaido University have established a link between a molecule called interleukin-34 (IL-34) and Triple Negative Breast Cancer, and have shown that IL-34 can be used to assess prognosis of TNBC patients. Their findings were published in the specialist journal Breast Cancer. 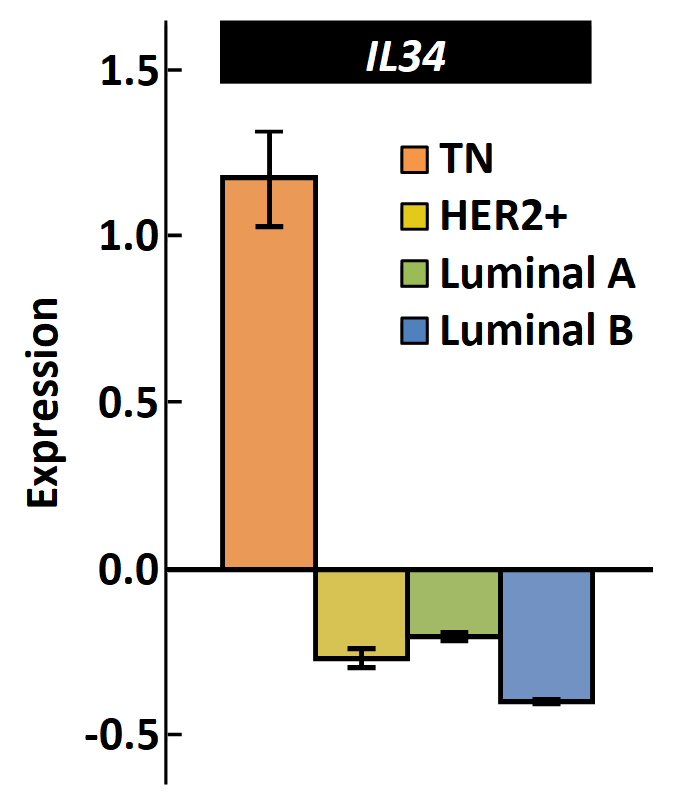 The expression of IL-34 is much higher in TNBC than in other types of breast cancer. (modified from Nabeel Kajihara, et al., Breast Cancer, June 23, 2020)

Interleukin-34 (IL-34) is a cytokine, a type of molecule that transmits signals between cells and is responsible for fighting disease. IL-34 is known to associate well with poor outcomes in lung cancer and liver cancer, among others. For this reason, the scientists decided to determine the relationship between IL-34 and TNBC.

Data from 1083 breast cancer patients was obtained from The Human Cancer Genome Atlas (TCGA) and was statistically analyzed. The scientists investigated the correlation between IL-34 and each type of cancer. They discovered that TNBC is associated with high levels of IL-34. When they looked into the effect of IL-34 on prognosis, they found that the prognosis for TNBC patients with high IL-34 levels was poor. 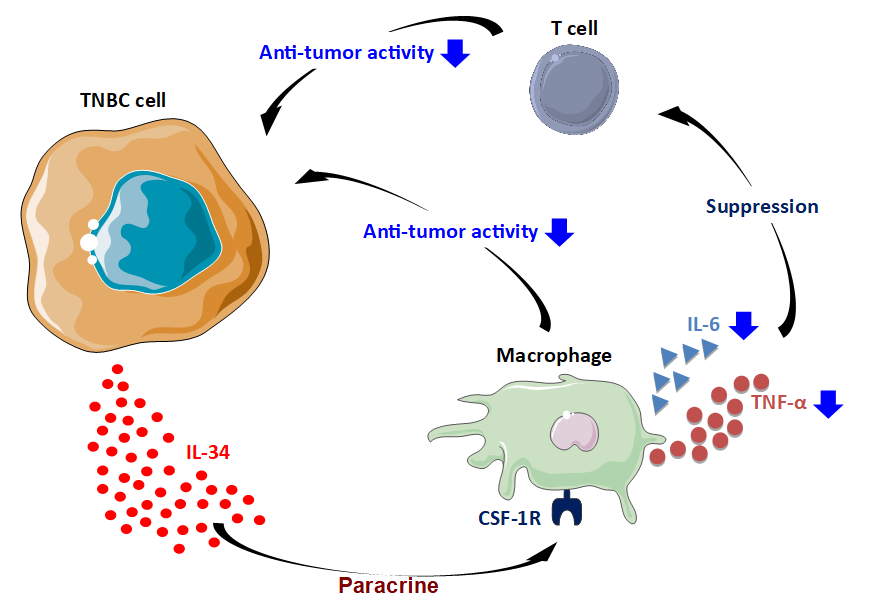 To demonstrate that this relationship could be replicated in the lab, experiments were carried out in mice models. The scientists compared the growth and development of two cell lines that were identical except for the levels of IL-34 expressed: one cell line expressed high levels of IL-34 while the other expressed low levels. In cell culture, there was no difference observed between the cell lines; however, once introduced into mice, the cells that expressed high levels of IL-34 caused rapid tumor growth. They discovered that IL-34 promotes creation of a favourable environment for the growth of tumors by protecting them from anti-tumor macrophages.

The group that conducted this study was led by Professor Ken-ichiro Seino, head of the Division of Immunology, IGM. “Currently, chemotherapy is the only reliable means of treating TNBC,” he says, “but it frequently develops resistance to chemotherapy. Our findings show that IL-34 is an attractive molecular target for targeted cancer therapy.”

For the last five years, Seino’s lab has worked on the relationship between IL-34 and different types of cancer. In a closely related study, his group has shown that treatments to reduce IL-34 leads to reduced tumor growth in mice; what remains to be studied is whether this can be used in humans, and how effective it will be.

Nabeel Kajihara, the first author of the current paper.

This work was supported in part by Japan Agency for Medical Research and Development (AMED; Practical Research for Innovative Cancer Control)