A Hokkaido University researcher has successfully developed a method to accurately manipulate gene expression by light illumination and demonstrated its usability by creating double-headed zebrafish.

It has been difficult to freely manipulate the timing and duration of gene expression using existing gene manipulation technologies, which depend on organism’s gene regulating mechanism. In recent years, methods using light to regulate gene expression have been developed, but deemed insufficient to manipulate embryonic development. This is due to a time lag of several hours that occurs from light irradiation to the start/cessation of protein production. Existing photocontrol technologies also require genetic modification, a process that is not only time-consuming but also strictly regulated by the Cartagena Protocol.

Shinzi Ogasawara of Hokkaido University’s Creative Research Institution focused his research on controlling the process of translating messenger RNA (mRNA) to protein, instead of the conventional process of transcribing DNA to mRNA. As the new technology acts on mRNAs, genetic modification is unnecessary. Instead, the mRNAs were modified in such a way that they could bind to “Initiation Factors (IFs)” when irradiated with ultraviolet light which then starts the process of translation; whereas mRNAs were unable to bind to IFs when irradiated with blue light. 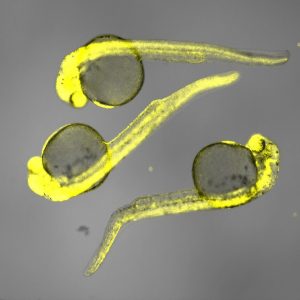 Double-headed zebrafish created by accurately controlling the expression duration of the squint gene.

Ogasawara says “Our method would be particularly useful to accurately manipulate embryonic development, and reveal the importance of the timing and duration of gene expression in biological events. By applying this technology to higher model organisms such as mice, we hope to help clarify the role each gene plays in the development of animals as well as in various diseases”.