Scientists successfully employed mutagenesis to identify the gene that causes hybrid sterility in rice, which is a major reproductive barrier between species.

Their success is expected to help elucidate the genetic basis of interspecific hybrid sterility, which is important not only for understanding the evolutionary biology of speciation, but also for improving crops for food production.

There are only two cultured rice species: an Asian one (Oryza sativa) and an African one (O. glaberrima). The African species is tolerant to various abiotic and biotic stresses such as high temperature, providing a valuable source of genes that could be useful in rice production. However, the interspecific reproductive barrier stands in the way of using the African species in breeding programs with the Asian species. Plants obtained from hybridizing the two species yield almost no seeds when they are cultivated. This is known as hybrid sterility. 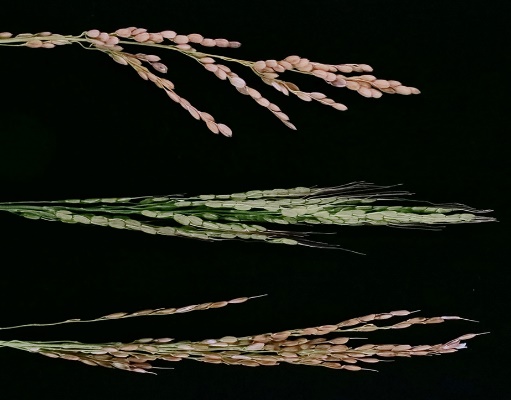 Asian species (Oryza sativa, top), African species (O. glaberrima, bottom), and their hybrid (middle). The hybrid has husks but does not yield seeds.

To identify the cause of this infertility, Assistant Professor Yohei Koide and Associate Professor Akira Kanazawa of Hokkaido University along with their collaborators Senior Researcher Yoshimichi Fukuta from JIRCAS and Professor Yutaka Okumoto from Kyoto University focused on the S1 gene locus, which is known to be involved in hybrid sterility. The team created numerous hybrid seeds heterozygous for the S1 locus, which were then subjected to heavy-ion beam irradiation to induce mutations. The irradiation experiments were conducted at RIKEN.

While screening for mutants, they found plants that yielded seeds, thus fertile, despite being heterozygous for the S1 locus. Subsequent gene analysis of the S1 locus found a deletion in the peptidase-coding gene called SSP. When the team brought the intact SSP into the Asian species by transformation experiments and crossed the transformant with the mutant, it regained hybrid sterility, showing SSP is causative. Interestingly, the transformation alone did not show sterility, suggesting that SSP is indispensable but not sufficient for hybrid sterility.

“Our study shows the interspecific reproductive barrier can be overcome by a disruption of a single gene. Further research could help improve breeding programs and enhance rice yields to address food shortages in growing populations,” says Yohei Koide.

Koide Y., et al. Lineage-specific gene acquisition or loss is involved in interspecific hybrid sterility in rice, Proceedings of National Academy of Sciences of the United States of America, February 12, 2018.