Pathogenic gene mutations causing a type of intractable skin disease can be eliminated from some parts of patients’ skin as they age, according to Hokkaido University researchers and their collaborators in Japan. This represents a form of natural gene therapy.

In general, there is no fundamental treatment method capable of curing diseases caused by gene abnormality because it is difficult to remove certain genetic mutations from all affected cells. Loricrin keratoderma (LK) is one such disease; caused by loricrin mutations, it is characterized by dry, thickened, scaly skin from birth. Only symptomatic treatments are available to alleviate the conditions, which cause difficulties in patients’ daily lives. Thus far, doctors have not known how to treat the ailment.

In a study published in Life Science Alliance, the research team, including Toshifumi Nomura and Shotaro Suzuki of Hokkaido University, observed the patients’ skin for an extended period. They discovered that LK patients had normal-looking skin areas dotted around their body. Tissue from those areas was examined for histology, and DNA extracted from both the epidermis and dermis were checked for loricrin mutations.

The study found skin areas that looked normal were in fact skin that had returned to normal and that, surprisingly, the mutant loricrin which patients were supposed to have from birth had disappeared. Detailed analyses of the DNA sequences revealed that the mutation had disappeared due to somatic recombination — a type of DNA recombination that causes exchange of DNA strands that contain similar sequences. Normal skin stayed in the same location for at least several years, so the finding suggests gene mutations are eliminated from stem cells that keep providing new cells in the epidermis.

The study also found that cells with normal loricrin have higher reproduction ability and are more likely to form colonies than cells with mutant loricrin. This survival advantage could be why the normal cells became noticeable on the patients’ skin.

“If we could elucidate the mechanism of frequent somatic recombination occurring in epidermal cells, and could find a way to artificially induce it, that could lead to the development of a new treatment method for loricrin keratoderma, and potentially other genetic diseases,” says Toshifumi Nomura.

This study was conducted in collaboration with Asahikawa Medical University and Nagoya University in Japan. 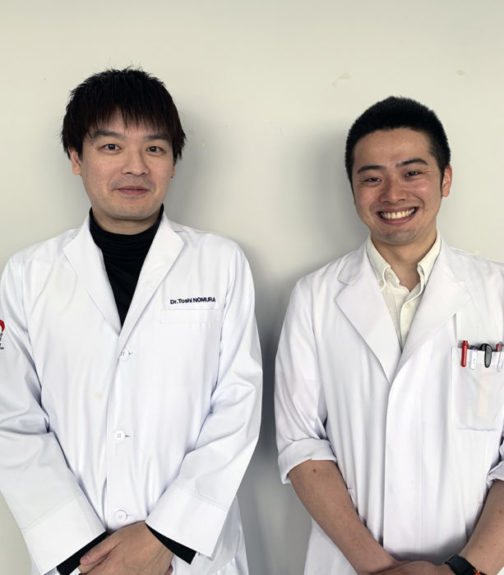 Toshifumi Nomura and Shotaro Suzuki of the research team.

This study was supported by the JSPS KAKENHI (JP15K09738 and JP17H06271), the Terumo Foundation for Life Sciences and Arts (16-II 330), the Rohto Dermatology Research Award, the Akiyama Life Science Foundation, the Nakatomi Foundation, the Ichiro Kanehara Foundation, and the Northern Advancement Center for Science & Technology Foundation (H28 T-1-42).