A nanosheet made of organic polymers has been developed to prevent the drying and deforming of biological samples, thus enabling high-quality imaging under microscopes.

Be it cosmology or biology, the advancement of science largely relies on the advancement of measuring instruments and methodology. In the past couple of decades, scientists’ passion to see the invisible has vastly improved microscopes and other equipment resulting in high-resolution images, three-dimensional images, and longer recording times of biological samples. However, current setups do not prevent them from drying and deforming during observations, resulting in blurred images.

Scientists from Hokkaido University and Tokai University in Japan have developed a nanosheet made of a fluorine-containing polymer known as CYTOP® and investigated its effectiveness in producing clear images when wrapped around biological samples. CYTOP® is a commercially available chemical agent developed by Asahi Glass Co., Ltd. 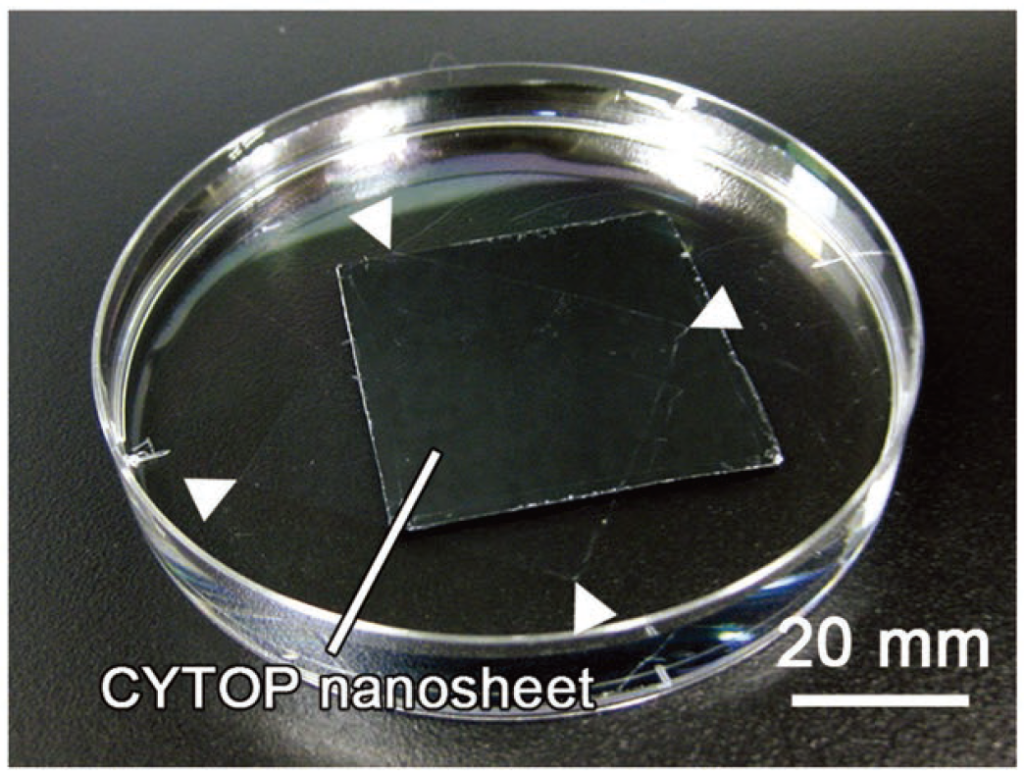 The researchers successfully produced a nanosheet of CYTOP® by spreading its solution on a layer of poly-vinyl-alcohol (PVA). The nano-thin layer of CYTOP® was easily detached from the PVA layer by soaking them in water. The thickness of the nanosheet could be adjusted by changing the concentration of its solution. The nanosheet retained CYTOP®’s high water repellent properties which should help retain a sample’s water content when used as wrapper.

The team then tested the nanosheet’s wrapping properties by using alginate hydrogel to simulate biological samples such as tissue. They found that the gel retained 60% of its water content after 24 hours when wrapped whereas the unwrapped gel became totally dehydrated after about 10 hours. Experimenting with various thicknesses, they found that a 133-nm-thick sheet provides sufficient water retention and surface adhesion which is necessary for fixing samples to the cover slip.

They next applied an actual biological sample: 1-mm thick brain slices from mice. Without a CYTOP® wrap, evaporation of the embedded water caused local, non-uniform sample shrinkage, leading to blurred images. By wrapping the brain slices in a CYTOP® nanosheet, however, images with a high spatial resolution could be obtained from scanning a large area (more than 750 µm x 750 µm) over a long time (about 2 hours). Similar results were obtained even when the sample was embedded in agarose gel — a common technique used for mounting biological tissues that could disturb the clarity of taransparentized samples — without disturbing the clarity.

“The wrapping technique is still at an early stage, but it establishes and verifies the superiority of nanosheet wrapping for tissue imaging,” say the researchers of the paper published in Advanced Materials. 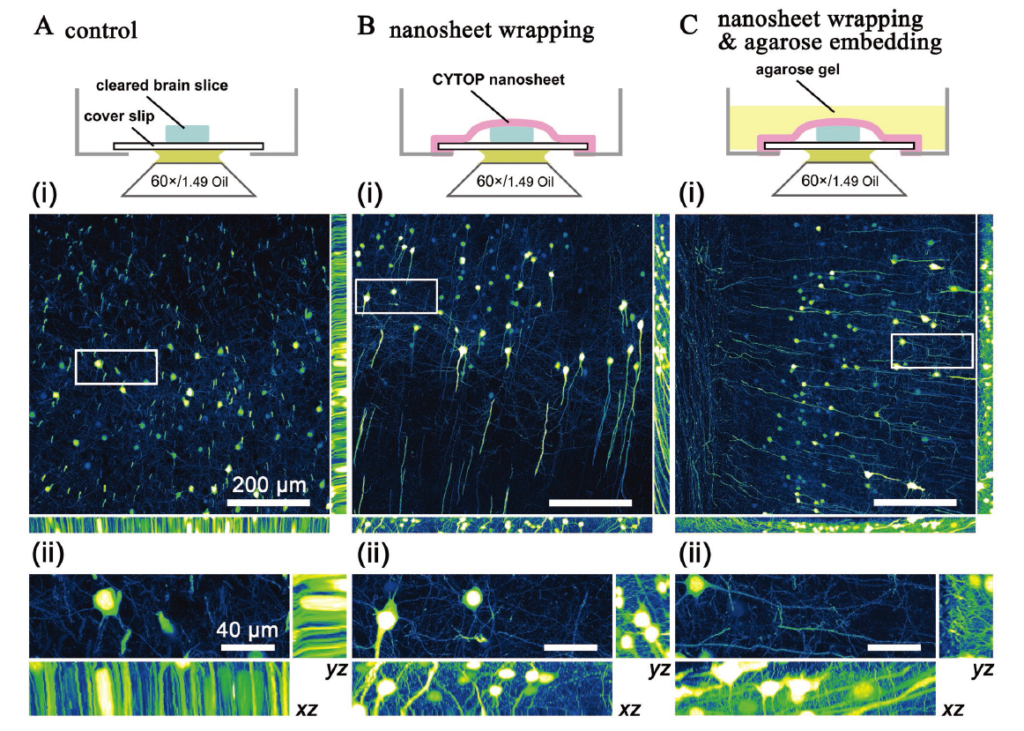 This study was supported in part by a Grant-in-Aid for Scientific Research on Innovative Areas “Nanomedicine Molecular Science” (No. 2306) from the Ministry of Education, Culture, Sports, Science, and Technology of Japan (MEXT), MEXT/JSPS KAKENHI Grant Number JP15H05953 “Resonance Bio” and JP26242082, a Grant-in-Aid for Matching Planner Program (No. MP27115663001) from the Japan Science and Technology Agency, a MEXT-Supported Program for the Strategic Research Foundation at Private Universities, a FY2016 Cooperative Research Program (No. 20161027) and FY2017 Research Program of “Dynamic Alliance for Open Innovation Bridging Human, Environment and Materials” (No. 20173007) in “Network Joint Research Center for Materials and Devices.”