Obesity could enhance cancer development while aspirin might prevent it ­­— a new insight into potential targets for cancer prevention.

Obesity is a known risk factor for certain types of cancer, including colon, pancreatic and breast cancer. Studies have shown its role in promoting tumor growth and malignant progression. But its role in cancer initiation has been uncertain.

“Epithelial” cells lining the surfaces of organs have the intrinsic ability to remove potentially malignant cells from their midst. This is called the “epithelial defense against cancer” mechanism. Normally, the cells sense harmful cells and push them out by the process called cell competition.

Feeding the Ras mice high-fat diets, which resulted in severe obesity, suppressed the defense mechanism and therefore increased the number of Ras-transformed cells remaining in the tissue. This suppression was seen in the intestine and pancreas, but not in the lungs. Furthermore, a month later the Ras-transformed cells developed a tumor in the pancreas of mice with the high-fat diet. The result supports previous correlations made between intestinal and pancreatic cancer and obesity, but not lung cancer. 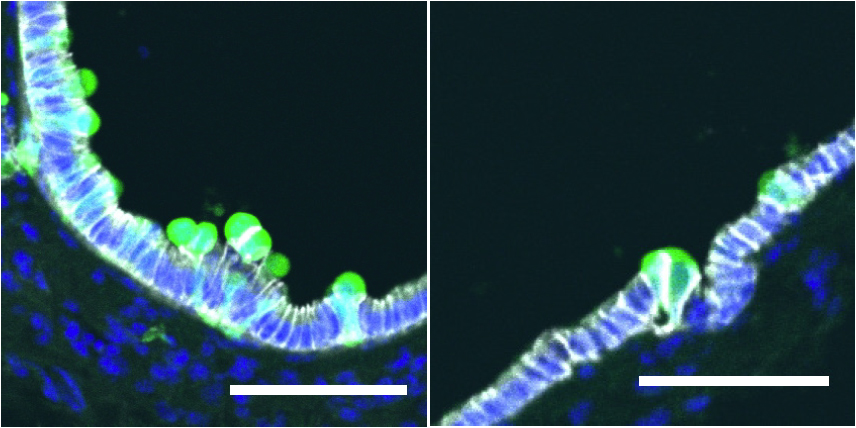 Transformed cells (green) were eliminated from the epithelium of the pancreas in mice fed a normal-diet (left) while the cells remained in the tissue of mice fed a high-fat diet (right). (Sasaki A. et al., Cell Reports, April 24, 2018)

Following experiments using the mice model and cultured cells revealed that fatty acids and chronic inflammation cause the suppression of the defense mechanism.

“This is the first report to show that obesity and chronic inflammation can influence competitive interaction between normal cells and transformed cells. It implies other factors such as infection, smoking, sleeping patterns and aging may also affect cell competition,” says Yasuyuki Fujita of Hokkaido University who led the study.