Hokkaido University researchers have found that more than 10,000 stream fish migrated to a small tributary only four months after it had dried out during the summer, suggesting that even remnant tributaries are critical wintering habitats.

Depending on their body growth and seasonal changes, many stream fish migrate between small tributaries and a river’s main stem, or between different environments such as rapid and slow-moving water habitats. Finding a wintering habitat is key for fish to survive in frigid locations such as Hokkaido, the northernmost island of Japan. But such habitats have been only scantly surveyed due to the difficulties associated with undertaking fieldwork during the harsh winter season.

A small tributary of the Otofuke river in Hokkaido, Japan. Photos on the left and right were taken on August 14, 2013 and on January 22, 2014 respectively.

In 2013, the team, led by Associate Professor Itsuro Koizumi of the university’s Faculty of Environmental Earth Science, located a small tributary of the Otofuke River (in the Tokachi River System in central Hokkaido) that had dried out during the summer. When the team surveyed the tributary again in September, after water had returned, the researchers discovered only several rainbow trout, while aquatic insects such as stoneflies, mayflies and caddis flies were almost nonexistent. During another survey conducted at the end of November, however, the team caught a considerable number of fish, mainly rainbow trout, Siberian stone loach and Japanese dace.

In order to perform quantitative research, five reaches between the source of the tributary and its junction with the main river were sampled, and the number of fish in the tributary was statistically estimated. 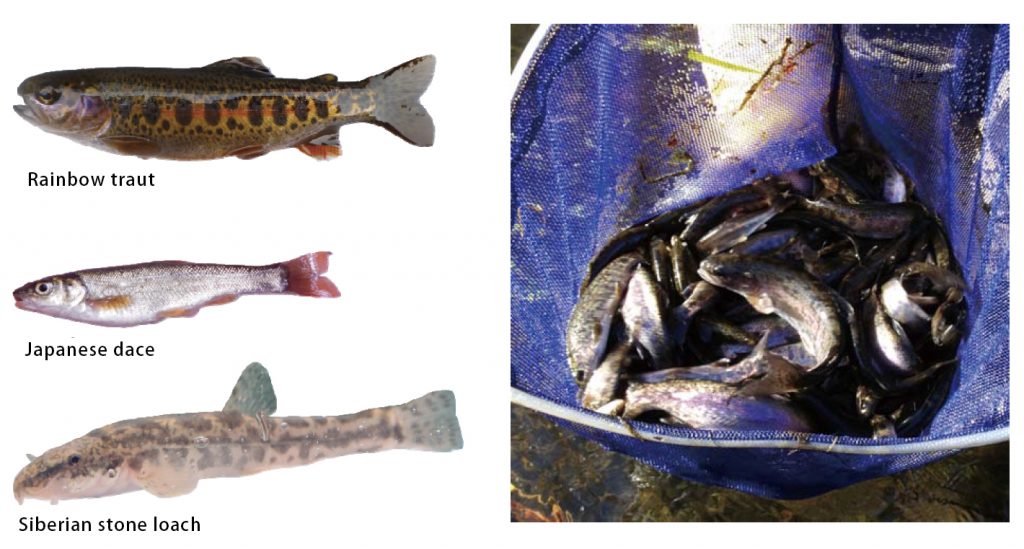 Stream fish captured at the tributary during the winter

The research found that an estimated 10,000 fish returned to the tributary, which stretches approximately 1km, less than four months after its dewatering. It also discovered that juvenile fish were in the majority: Few mature adults or fish less than 12 months old were found, suggesting that mature adults overwinter in the main stem and small young-of-year fish cannot migrate up to the tributary.

“The tributary is a canal-like, artificially modified stream, which, at first glance, seems unsuitable for fish habitation” says Itsuro Koizumi. “But our research showed that small artificial canals or even remnant tributaries could provide habitats for many fish during the winter. We hope that our findings will provide new insights into the management of small rivers”, he added.