Oshoro Maru, a training ship belonging to Hokkaido University’s School of Fisheries Sciences, has come back from a 58-day journey to the Arctic region via the Bering Sea to conduct oceanographic and ecological research while training undergraduate students from several Japanese universities.

It was the first overseas voyage for the current, fifth-generation Oshoro Maru V—which was commissioned in July 2014—and the first in four years for an Oshoro Maru ship. Oshoro Maru IV sailed to the Arctic region in 2013 before being decommissioned. 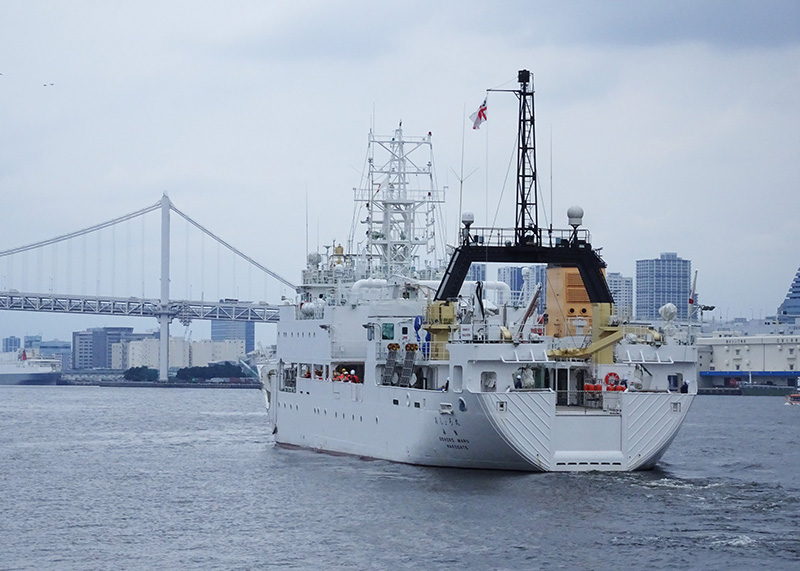 Oshoro Maru V leaving Tokyo for the expedition to the Arctic region on June 18th. Photo taken by Makoto Sampei.

Oshoro Maru V left Hakodate Port on June 5th and made port calls at Tokyo, Dutch Harbor and Nome (both in Alaska) before returning to Hakodate on August 1st. Aboard the ship were Hokkaido University students taking an at-sea training course, and students from other universities under a Ministry of Education, Culture, Sports, Science and Technology (MEXT) arrangement that allows them to enroll in courses offered by other institutions. The students were joined by researchers from Hokkaido University and elsewhere who are participating in the Ministry’s Arctic Challenge for Sustainability (ArCS) Project.

Due to global warming, temperatures in the Arctic region are estimated to have risen more sharply than in many other regions, resulting in the rapid melting of sea ice in the Arctic Ocean. Researchers on the Oshoro Maru IV in the International Polar Year (2007-08) and in 2013 found massive volumes of warm seawater from the Pacific flowing into the Arctic Ocean causing the amount of sea ice to decline. That triggered changes in the distribution of plankton and the ocean’s primary productivity, specifically the amount of carbon fixed by marine phytoplankton absorbing carbon dioxide in the seawater. 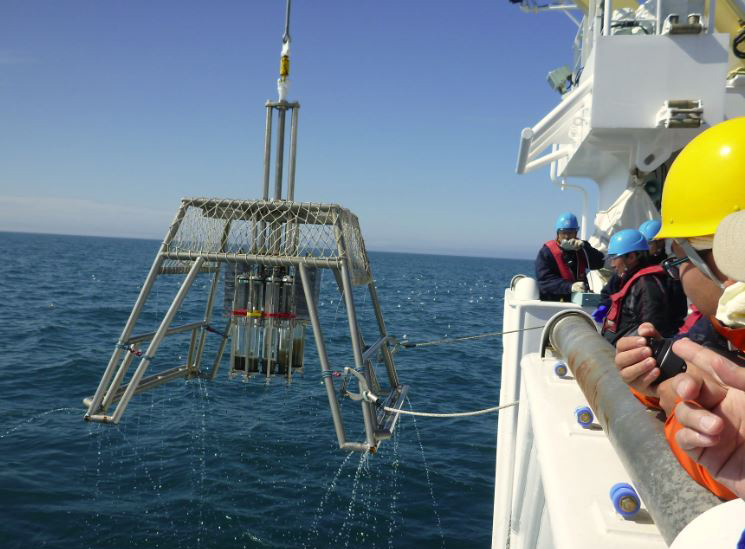 The research team collecting sediment samples from the sea bottom of Chukuchi Sea, a southern part of the Arctic Ocean near the Bering strait. The sediments contain remains of phytoplankton which help us understand the influence of changing environments on marine ecosystems. Photo taken by Atsushi Ooki.

The Arctic ice has decreased further in the four years since the 2013 Oshoro Maru expedition. It is feared that the sea ice will melt completely during the summer in the future, which will have a major impact on the region’s marine ecology. There are also concerns that pollutants from lower-latitude regions could accumulate in high concentrations in creatures of the Arctic region at the end of the food chain.

If the sustainable use of marine resources is to be ensured and biodiversity preserved, it is, therefore, an urgent task for countries in the vicinity of the Arctic Ocean and the entire international community to unravel the mysteries over such climate change-linked phenomena. This is especially considering the northward shift in the distribution of living organisms and changes in their feeding behavior.

During the voyage, the researchers collected scientific data to shed light on the impacts of global warming and human activity on biodiversity in the Arctic region, as well as the mysteries of the Arctic biota and the region’s ecological structure and functions. 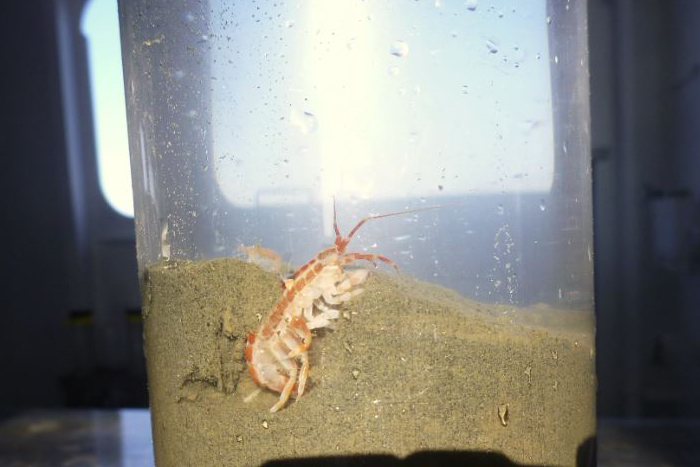 A crustacean found in one of the sediment samples. Photo taken by Atsushi Ooki.

Photographs and videos were taken to inform middle and high school students about the wonders of the ocean and stimulate their intellectual curiosity about the sea. This undertaking was made possible by a grant from the Nippon Foundation’s Sea and Japan Project.

Oshoro Maru V, an ice-class ship designed to withstand the harsh conditions of subarctic and arctic zones, is an educational and research platform for fisheries and other related sciences. It was commissioned to facilitate exchanges and joint research between academic and research institutions in Japan and abroad, and to contribute to the reconstruction of the fisheries industry in the Tohoku region, which was devastated by the 2011 Great East Japan Earthquake.