Picky ants maintain color polymorphism of bugs they work with.

Hokkaido University researchers have found that ants have a particular preference for aphid colonies with certain colors, which could be why these bugs are able to keep their colors across generations.

Aphids are tiny bugs that live in large colonies and suck sap from plants, producing a sugar-rich substance called honeydew, which is then eaten by ants. Ants, in turn, protect aphids – in a mutually beneficial relationship – from the predators that eat them.

Researchers at Hokkaido University in Japan and colleagues investigated whether this symbiotic relationship played a role in the genetic selection of the red and green aphids that feed on the mugwort plant – known as Macrosiphoniella yomgicola. The presence of two or more clearly different forms in a species is known as “polymorphism”. Previous research had shown that aphid colonies that were more polymorphic tended to survive longer. This could be due to the number of ants attending to these colonies. 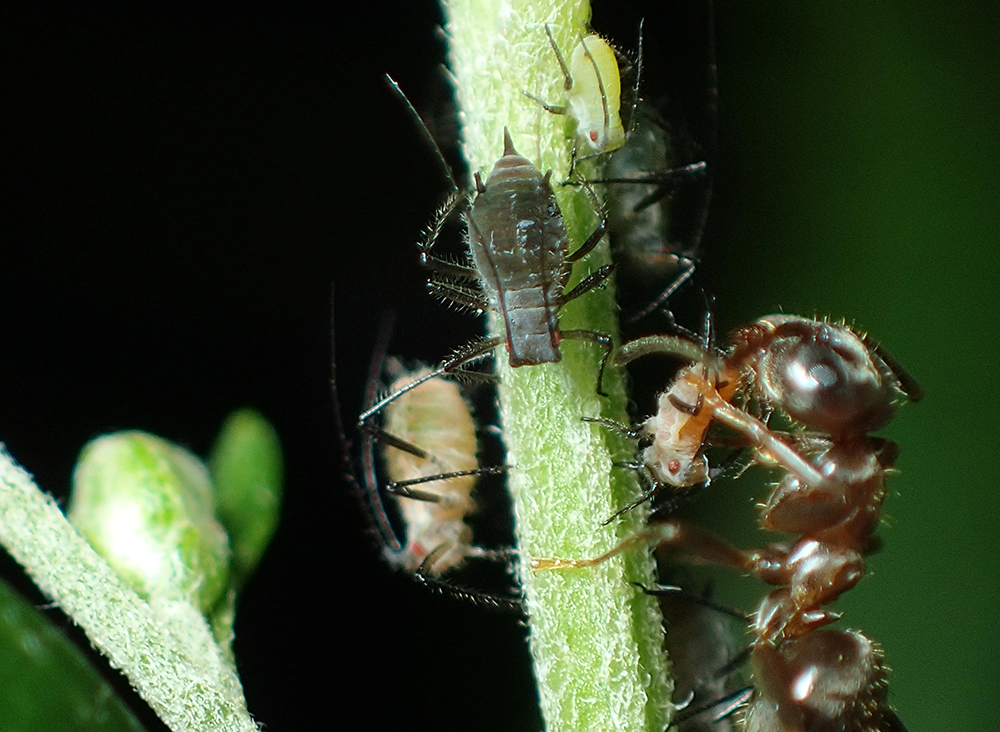 The team first experimented by removing ants from aphid colonies and found that most colonies whose attending ants were removed did not survive. This demonstrated that ants were necessary for the survival of the mogwort aphids.

They then experimented with colonies that had varying proportions of red and green aphids and found that the number of attending ants was highest when green aphids comprised 65% of the colony.

“This result suggests that these polymorphic colonies are protected more efficiently from predators by the attending ants than less polymorphic colonies,” write the researchers in their study published in the journal Science Advances. “Thus, ant attendance may maintain the observed color polymorphism in M. yomogicola,” they say.

This result is particularly significant because it does not fall under previously known predatory-dependent methods of genetic selection that result in a balance of polymorphisms.

There is much room for future research on this topic, the researchers say, because many questions remain unanswered. The team is now investigating why the ants prefer an intermediate color ratio of aphid colonies.