Applying an electric field to some materials causes their atoms to “switch” their electric polarization from one direction to another, making one side of the material positive and the other negative. This switching property of “ferroelectric” materials allows them to be used in a wide range of applications. For example, ferroelectric capacitors are used to store binary bits of data in memory devices.

Researchers at Japan’s Hokkaido University have developed a novel ferroelectric plastic crystal that could accelerate the development of more flexible, cost-efficient and less toxic ferroelectrics than those currently in use. 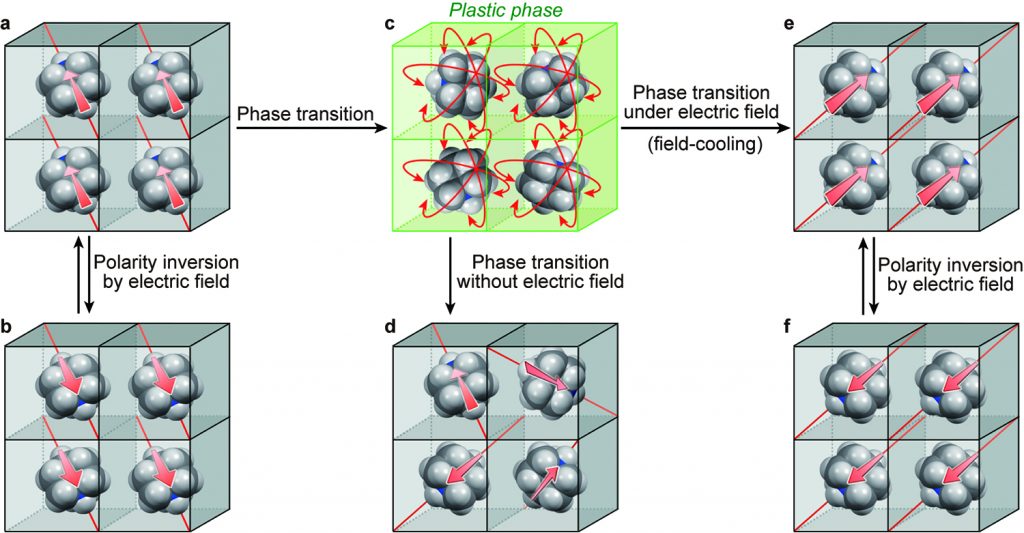 Being able to control the polarity in this manner addresses a major challenge previously faced by researchers working with organic compound-based ferroelectric crystals. These are less symmetric than inorganic crystals, and can thus be polarized only in one direction leading to a very weak overall polarization of randomly oriented crystals.

A distinct advantage of this particular crystal is its transition to a plastic state when heat is applied. This plasticity – as opposed to fracturing that occurs in regular organic and inorganic crystals when a mechanical stress is applied – makes it extremely advantageous for use as a thin ferroelectric film in devices, such as non-volatile ferroelectric random-access memory devices, which maintain memory when the power is turned off.

Exploring crystals composed of molecules similar to quinuclidine could lead to the discovery of more ferroelectric crystals, write the researchers in their paper published in the journal Nature Chemistry. Chemical modifications of the molecules’ constituent ions could also improve their performance, the researchers add.