On September 9th and 10th, President Toyoharu Nawa visited Pacific National University (PNU), one of our important partner universities, in Khabarovsk, Russian Federation. He and other members from Hokkaido University (HU) met with President Sergey N. Ivanchenko, Vice-President Aleksandr E. Zubarev, and Vice-President Aleksandr R. Mshvildadze. During the meeting, they discussed current and future collaborations between the Association of Institutions of Higher Education of the Russian Federation and Japan as well as between PNU and HU.

From September 11th to 13th, the President attended the 4th Eastern Economic Forum (EEF) in Vladivostok. The forum is held every year in Vladivostok to promote international businesses and is attended by people involved in politics, economics, and education from all over the world, including business and political leaders from Japan and Russia. Another one of our partner universities, Far Eastern Federal University, annually hosts the forum.

For the first two days of EEF, the President attended and spoke at the session titled “University in a multi-stakeholder architecture,” which was a part of the 7th APEC Conference on Cooperation in Higher Education (APEC CCHE’18). During his presentation, he introduced Hokkaido University and explained the variety of activities being done through the Platform-Building Project. He also urged other Russian universities to join the project. 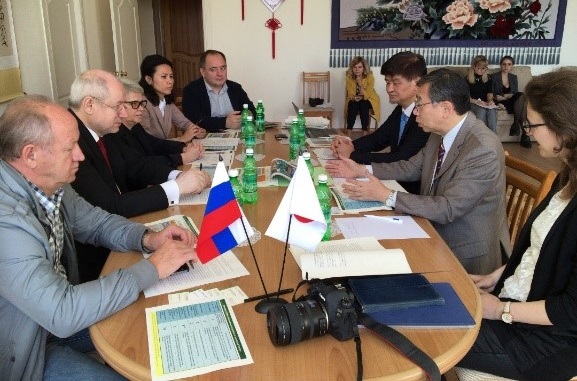 Meeting with President Ivanchneko of PNU

On September 12th, the President participated in the Japan–Russia Business Round Table Meeting and discussed with other participants the future of exchanges between Japan and Russia related to business and education.

The following day, he attended a meeting with Japanese Prime Minister Shinzo Abe. The President expressed his gratitude for the Prime Minister’s visit to Hokkaido to inspect the state of the damage caused by the 2018 Hokkaido Eastern Iburi Earthquake. He then reported on the 1st General Assembly of the Association of Institutions of Higher Education of the Russian Federation and Japan (the 7th Japan–Russia Forum of Rectors) held in May and the start-up of the Japan–Russia Student Union by Japanese and Russian students, who just last year were encouraged to promote exchanges by the Prime Minister. Finally, the President spoke of his determination that Hokkaido University should lead future exchanges between Japan and Russia.