President Toyoharu Nawa of Hokkaido University attended as a keynote speaker at the 11th Japan-China University Forum which was held at Shanghai World Trade Fund in Shanghai on Sunday, May 14th, 2017. On the day, 25 universities from Japan, Presidents and Vice Presidents from about 50 universities in China, as well as government officials and people from industry participated. More than 400 people took part in the exchange in total. 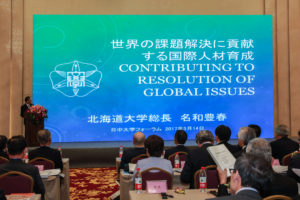 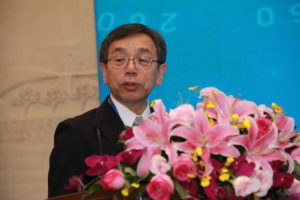 The Japan-China University Forum is co-sponsored by the Japan Science and Technology Agency (JST) and the State Foreign Expertise Bureau of China. Its aim is to develop personnel within Japanese and Chinese universities, strengthen international collaborations, and promote exchanges between the government, industry, and academia. The first meeting was held in Tokyo in 2010 and has been highly praised as one of the biggest events of scientific exchange between Japan and China.

This year marked the 11th meeting, the theme of which concerns joint issues between Japan and China such as university management, internationalization, and the development of human resources. Keynote speeches were given in the morning by the heads of Japanese and Chinese universities including Hokkaido University and the Chinese Academy of Sciences. Afterwards, the Sakura Science Plan was introduced by a Special Adviser from JST. In the afternoon, a panel discussion was held by key chief universities and colleagues, where they were able to vigorously discuss these issues.

In the keynote speech by President Nawa, the president introduced how Hokkaido University is addressing internationalization, especially in regards to China. During the speech, he mentioned that the university is pursuing its international educational and research activities on the basis of “Lofty Ambition” which was taught by Dr. Clark, the first vice-president of Sapporo Agricultural College (the predecessor of Hokkaido University). Professor Jian Ping Gong at the Hokkaido University’s Advanced Life Sciences Research Institute, who is from China, introduced the university’s unique research programs in areas such as soft matter science, zoonosis research including studies on avian influenza, and low temperature science. Furthermore, there was mention of Hokkaido’s natural and food resources, the exchanges between Hokkaido and China, and expectations for the development of these exchanges in the future.