Putting the pressure on platinum

Superconductors are materials that, when cooled below a certain temperature, conduct free-flowing electricity without it being impeded by resistance. They are used in magnetic resonance imaging (MRI) machines, magnetic levitation trains and particle accelerators like the Large Hadron Collider. Researchers are constantly on the lookout for materials that can become superconducting at higher-than-currently-possible temperatures and lower costs. 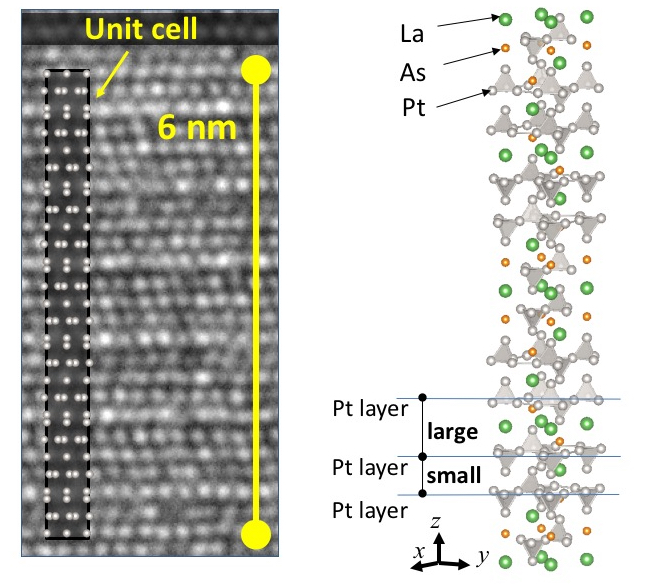 The material was developed by mixing lanthanum (La), platinum (Pt) and arsenic (As) powders in a ratio of 1:5:1 and compressing them into pellets. These were then heated to 500°C for ten hours. The resultant material was ground and re-pelletized, then heated at 1000°C for an hour at various pressures. The team found that the final product (LaPt5As ) was non-superconducting at a pressure of five gigapascals (GPa) (equivalent to 50,000 bars of pressure), but became superconducting at 10 GPa, only to return to a non-superconductive state at 15 GPa.

The researchers examined the crystal structure of the superconducting LaPt5As. They revealed that platinum atoms formed multiple layers which piled up as high as 6 nm, the highest among metal superconductor. They also found that lanthanum and arsenic atoms separated platinum layers from each other in a way, they speculate, which weakens the interaction between platinum electrons, allowing them to flow more freely and resulting in the superconducting property.

Future research that determines the detailed crystal structure of the non-superconducting phases of LaPt5As will aid in the understanding of the mechanism that causes the material to become superconducting at 10 GPa, the researchers say.

High-pressure synthesis (over 10 GPa) is not a commonly used method in the field of materials science, write the researchers in their study published in the Journal of the American Chemical Society. This research shows there is room for further exploration of unknown phases induced by high pressure in a variety of materials, they say.