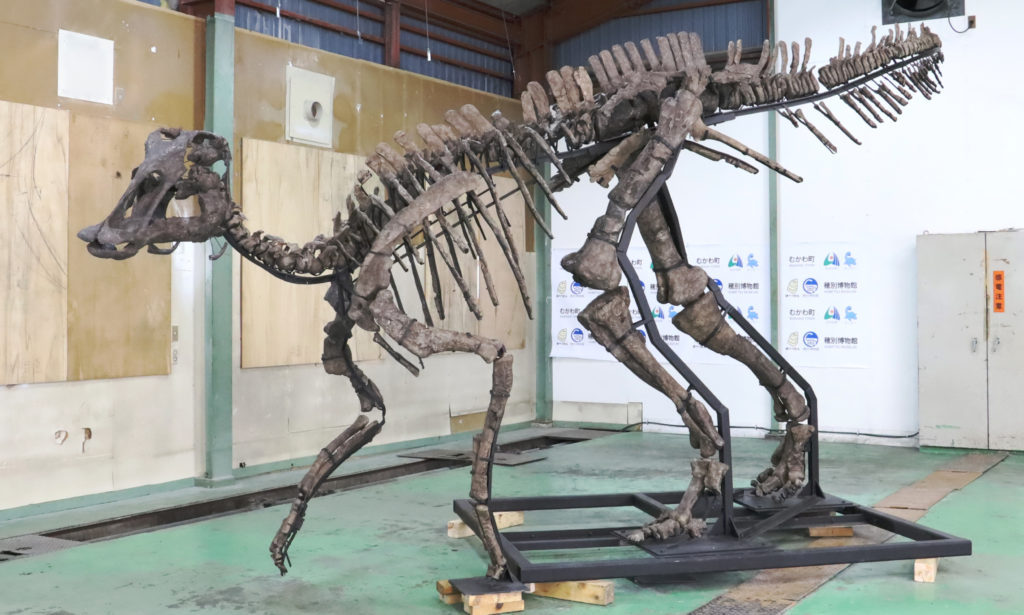 A complete reconstruction of the Mukawaryu dinosaur was showcased by the Hokkaido University Museum and Mukawa Town authorities. The Mukawaryu is the largest and most complete dinosaur skeleton in Japan to date.

This reconstruction, commissioned by the Mukawa Town authorities, was produced by Gobi Support Japan Co., Ltd in 2017 and 2018. The replica was made by casting the original fossils in resin molds and were assembled using a steel frame. 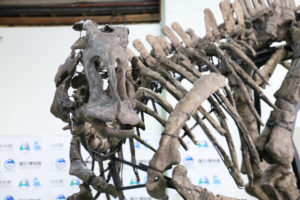 Close-up of the Mukawaryu. Photo by Yu Kikuchi.

Excavations of the dinosaur began in July 2013 in the Hobetsu district of Mukawa, when parts of the tailbone were uncovered in a marine deposit dating back to the Late Cretaceous Period around 72 million years ago, and identified as belonging to a Hadrosaurid, a duck-billed dinosaur. This led to further excavations in 2014 and 2015, and resulted in the unearthing of more than half of the entire 8-meter length skeleton. Excavations were finished in September 2018 once all of the fossils were extracted. Over 80% of the entire skeleton has been found and preserved.

The Mukawaryu is the largest and most complete dinosaur in the country, alongside the Fukuisaurus, Fukuiraptor, and Fukuivenator found in Katsuyama, Fukui Prefecture, and the Tambatitanis found in Tamba, Hyogo Prefecture.

The Hokkaido University Museum and Hobetsu Museum plan to continue research on the Mukawaryu dinosaur, including cataloging the bones, conducting comparative and classification studies, and more in-depth analyses on the species and its way of life. The research team is led by Hokkaido University Professor Yoshitsugu Kobayashi.

The reconstructed Mukawaryu skeleton and original fossils will be transported to the National Museum of Nature and Science in Ueno Park, Tokyo. They will be on display for the general public there from July 13th to October 14th, 2019.