Released by University of Tsukuba and Hokkaido University 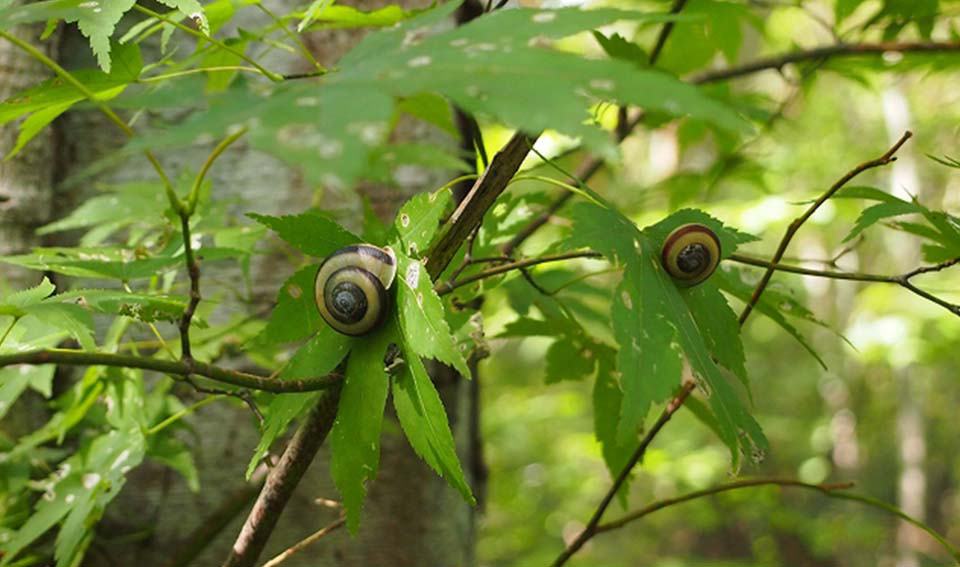 Land snails are generally believed to be ground-dwelling creatures, preferring dark and humid places, like the forest floor, or a suburban garden. So why do we find some species of snails in the tops of trees, where it is relatively light and dry? Associate Professor Ikuyo Saeki from the University of Tsukuba, Professor Tsutom Hiura from Hokkaido University and their colleagues from other institutions, have performed some fascinating research to find out why.

Prof. Saeki wanted to know what drives animals to leave the ground, defying gravity to live in the tree tops. Is it because there are fewer predators, or less competition with other animals? Is there more, or better, food? Some studies suggest that tree-dwelling species live longer than ground dwellers, but this idea, along with the others, is not easy to test in a natural environment. That’s when Prof. Saeki and her colleagues decided to enlist the help of a Japanese tree-climbing land snail. These snails, Sapporo mai-mai (Euhadra brandtii sapporo), live in a small area in the southern part of Hokkaido Island, Japan, in a cool, wet forest, full of trees such as oak and maple. During winter, the snails hibernate on the ground in the leaf litter, moving into the tree tops in the spring and then coming back down to earth in autumn. To find out why the snails leave the dark, humid earth for the light, dry canopy, Prof. Saeki and her colleagues observed the snails in the trees from tall observation towers, as well as on the ground, during different seasons of the year at Hokkaido University’s Tomakomai Experimental Forest. They compared the snails’ activities with those of the ground-dwelling carabine beetle, known to eat land snails. The temperature and humidity of the tree canopy was measured and compared to that of the ground. They also devised a clever way to compare survival rates of snails in the trees and on the ground. Snails were collected from the forest and taken back to the laboratory where a piece of string was tied securely around the shell. The snails were then returned to the forest and either tethered high up to trees, or to the ground. To work out what the snails eat, the researchers analyzed the carbon and nitrogen ratios in their bodies and compared them to other, land-dwelling snails who lived in the same forest. Infrared cameras were also used to record what types of animals were eating the snails. The results of this research have been published recently in the leading international journal, Animal Behaviour.

It turns out that by climbing into the trees in early spring, the snails avoid being eaten by the beetles, who are most active in summer. In fact, the survival rates of the snails in the trees were remarkably higher than those on the ground, in some cases almost double at the end of the two-week experiment. The video recordings revealed that raccoon dogs and rodents were among the culprits that ate the snails on the ground.

It also appears that the tops of trees are not as dry as one would think. In fact, during the time when the snails were present over summer, the humidity was a comfortable (if you’re a snail) 80%. In winter, however, the temperature dropped to as low as -18°C, low enough to kill the snails. By this time of year, the snails have already climbed down and are hibernating in the leaf litter under the snow, enjoying much warmer temperatures of at least -5°C.

The menu in the tree tops is different to that on the ground too. The tissue analysis of the snails revealed that tree-dwelling snails most likely eat epiphytic lichens and mosses that are abundant in the canopy, whereas the ground-dwelling snails eat forest leaf litter.

The Sapporo mai-mai snail thus defies gravity to live high up in the humid tree tops in summer, among the lichens and mosses, safe from the escargot-eating beetles, racoon dogs and rodents on the ground below. Prof. Saeki, a faculty member of the Certificate Programme on Nature Conservation, which was established at the University of Tsukuba, hopes that studying forest trees and the animals that live within them, like the Sapporo mai-mai, will help us to understand and subsequently, to conserve, utilize – and co-exist with – nature.