Sniffing out a mate with precision

Scientists from Hokkaido University and the University of Konstanz have discovered how male cockroaches detect the spatial distribution of female pheromones to locate a sexual mate.

Cockroaches are nocturnal and heavily rely on olfaction for finding food and mating partners in the dark. However, plumes emitted from an odor source are not smooth or continuous, and have no clear concentration gradient. They are rather composed of filaments (clusters of odor molecules) of various sizes (> mm) and concentrations interspersed with regions of clean air.

Researchers from Hokkaido University and their colleagues found that male cockroaches can detect fine structures of odor plumes, thanks to their finely tuned odor sensors on their antennae and neural circuits that convey spatial information to the brain.

Using microelectrodes, the researchers recorded the electrical activity of pheromone-sensitive interneurons in male American cockroaches that relay signals of female-producing sex pheromones in the antennal lobe (functional homolog to the mammalian olfactory bulb) to higher-order centers.

The team identified twelve key interneurons for sensing pheromones, each of them tuned to receive signals only from a certain portion of the cockroach’s antenna. One neuron is large in size, and responds to stimuli along the entire length of the flagellum. Three have a medium-sized receptive field, and receive signals from a third of the flagellum. The remaining eight neurons are more finely tuned, responding to stimuli only on a limited part of the antenna. Importantly, there is large overlap in the receptive fields of neighboring neurons, which ensures complete coverage over the entire flagellum.

The researchers also investigated how pheromone signals are transmitted through the olfactory circuit in the brain. As in mammalian olfactory systems, sensory neurons responsive to the same kinds of odors converge in a spherical structure called the glomerulus. The macroglomerulus (MG) in the cockroach, which receives convergent axonal input from pheromone-responsive neurons, is subdivided into layers according to their spatial origins in the antenna. The 12 key neurons exploit this layered map with precision: their dendrites (input sites) occupy distinct but partly overlapping layers within the macroglomerulus according to their receptive fields in the antenna. The signals processed by these neurons are carried to distinct regions in the mushroom body (involved in spatial memory formation), suggesting that the spatial information about pheromones are maintained from the surface of the antenna up to the mushroom body.

The team suspects that the read-out of combinatory activity of small neurons in the mushroom body allows the cockroach to evaluate the sizes and shapes of odor filaments. Since the size and density of filaments differ depending on the distance from the source, such information might provide clues as to where the source is located. Moreover, cockroaches might be able to create stereotypical images of the odor plume in the mushroom body via temporal sampling of the odor signals, as antennae of cockroaches move voluntarily.

“Spatially tuned receptive fields tiled on the antenna are reminiscent of those in the visual system. Thus, mapping the spatial distribution of odors will be an important strategy to successfully navigate using odors because cockroaches that walk in obstacle-rich environments have fewer occasions to be in contact with odor filaments,” said Assistant Professor Hiroshi Nishino of the research team. 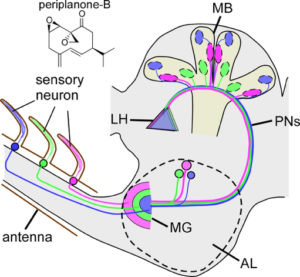