Spotlight on Research #13: How not to catch a fish 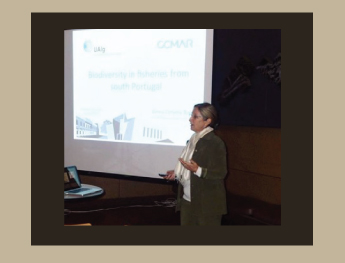 At the University of the Algarve, Professor Teresa Cerveira Borges is trying to help fisherman to stop catching unwanted fish.

The Algarve stretches along the the southern coastline of Portugal. With a warm climate and beautiful beaches, it is one of the most popular holiday destinations in Europe. The region is also famous for fishing, with a lagoon system formed between the mainland and a string of barrier islands creating an ideal natural fish hatchery.

Like Japan, fish are a major part of the local diet. Within the European Union, Portugal is number one for fish consumption and the sea zone controlled by Portugal (more technically, the ‘Exclusive Economic Zone’ for exploration and marine resource management) is the third largest in the European Union and 11th in the world. Import and export of fish is also a major business, so much so that the country’s most traditional fish —a cod— is not found in Portuguese waters but is imported from Norway and Iceland.

However, acquiring the Christmas Bacalhau (the Portuguese word for ‘cod’) is not Teresa’s concern. What she is worried about is the fish that are caught, but then thrown away.

Portuguese fishermen use a variety of different fishing gear in their work. Some —like the seine or trammel nets— surrounds the fish and then draws closed around the catch. Others like the trawl nets, scrape the bottom of the sea and sweep up everything in their path. Longlines consist of a row of hooks baited with a small fish like a sardine while traps and pots entice prey into an enclosed space to be easily gathered up.

The problem is that not everything caught is used. As well as the species the fishermen are trying to catch, a large number of other species will be pulled out of the water. This accidental acquisition is known as the ‘by-catch’ and while some of it can be sold, a large fraction has no economic value and is thrown back into the sea.

This so called ‘discard’ is huge. In the Algarve, studies identified more than 1,200 species in the trawl catch but around 70% are thrown away since they lack any commercial value. World data from 1995 estimates the discard amounts to as much as 27 million tonnes of fish per year.

Since the process of being caught is not gentle on the fish, almost all discards are dead when they are tossed overboard. This results in serious ecological impacts, since food chains are strongly affected by the removal of some species and the addition of other dead. A photograph of Teresa in the 1980s shows her struggling to lift a hake half the length of her body. Such large hake are no longer found in Portugal’s fishing hauls. So much discard also has a more direct economic impact, as fishermen are forced to waste valuable time and boat space sorting through their catch.

Teresa’s work has focussed on minimising the quantity of the discard. Part of this research is technological, investigating better net designs that allow the targeted species to be trapped while other species can escape. One example of this has been to introduce sparsely placed square-mesh shaped holes into a diamond-mesh shaped net. While the diamond net holes draw closed when pulled from the top, the square holes remain open to allow small, unwanted fish to swim free.

Another part of this work is exploring new ways to use the fish accidentally caught. Teresa has been visiting Hokkaido University these last few weeks in the Department of Natural History Sciences. From one fish-loving nation to another, she has been examining the fish and preparation methods used in Japan and whether these could be used to minimise discards back home. During her stay, she shared her experiences in the ‘Sci-Tech’ talk series; general interest science seminars held in English in the Faculty of Science.

Teresa explained that fish are discarded when there is no commercial value, but the reasons it cannot be sold vary. In some cases, the fish is inedible. The Boarfish for example, is small and has a hard outer skin with spines that makes it impossible to eat. For this species, the only possible use is for animal meal, but the value would be very low which makes it economically unattractive.

In other cases, the fish is edible but there is no dietary tradition for that fish locally. Without people being in the habit of eating a particular fish, there is no demand in the market place. This can be remedied by finding new ways to prepare different fish or new markets where catch could be sold further afield.

When new ways of preparing fish are found, the next step is to educate and entice the consumers. Campaigns focussed around selling a particular species send chefs into markets and schools to demonstrate how to prepare the fish, while web and Facebook pages are set up with recipe ideas. Books are also being produced to showcase the fish in Portuguese waters. These publications come out both in Portuguese and English to attract the attention of the Algarve’s 10 million spring and summer visitors. The result is a world-wide fish-eating initiative!

Teresa also emphasises the importance of working with the fishermen. With a craft steeped in tradition, many fishermen are reluctant to try new techniques or are wary of interference from scientists. Teresa’s department in the Centre of Marine Sciences works hard to encourage a good relationship with the local fishermen, both by explaining their work and listening to what they say.

The result has been a strong cooperation in favor of a cleaner catch with less laborious sorting; a win for both fisherman and fish.

So next time you see a sample of fish you’ve never tried before: why not give it a go?

The Faculty of Science Sci-Tech talks are free to attend! Look out for the next one later this year: http://www.sci.hokudai.ac.jp/international/project/sci-tech-talk/