Spotlight on Research #12: How to stop the Earth slamming into the Sun 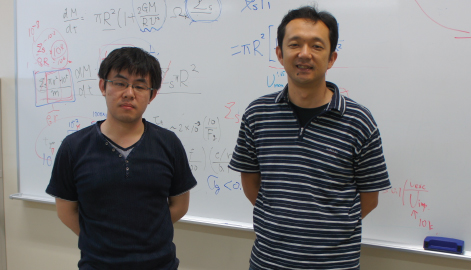 4.56 billion years ago, our solar system was a dusty, gaseous disc encircling a young star. Buffeted by the gas, grains smaller than sand began to collide and stick together. Like a massive Lego assembly project, steadily bigger structures continued to connect until they had enough mass to pull in an atmosphere from the surrounding gas. Eventually, the sun’s heat evaporated away the remaining disc gas and our solar system of planets was born.

There is just one issue: As the baby planet reaches the size of Mars (roughly 1/10th of Earth’s mass), the gas disc tries to throw it into the sun.

The problem is gravity. When the juvenile planet is small, its low mass results in a weak gravitational pull. This has very little effect on the surrounding disc of gas and neighbouring rocks. However, once the planet reaches the size of Mars, its gravity starts to tug on everything around it.

Rather like a circular running track, gas closer to the Sun travels around a small orbit, while gas further out has to move a greater distance to perform one complete circuit. This makes the gas between the planet and sun draw ahead of the planet’s position, while the gas further away from the sun is left behind. Once the planet’s gravity becomes large, it pulls on the gas either side of it, trying to slow down the inner gas and speed up the outer gas. In turn, this gas also pulls back on the planet, attempting to both slow it down and speed it up. The disc’s structure gives the outside gas the edge, and it slows the planet down. In more technical language, this exchange of speed is called ‘angular momentum transfer’ and it gives the planet a big problem.

The planet’s position from the sun is determined by the balance between the sun’s gravitational pull and the centripetal force. The latter is the cause of the outwards push you feel riding on a spinning roundabout. When the planet loses speed, its centripetal force decreases and the sun’s gravitational force pulls it inwards before the two cancel again. As the gas disc continues to push on the planet, it begins a death spiral towards the Sun.

It is stopping the planet’s incineration that interests Associate Professor Hidekazu Tanaka in the Institute for Low Temperature Science. Dubbed ‘planetary migration’, Hidekazu explains that when this problem was first proposed back in the 1980s, nobody believed it.

“The migration happens at very high speed,” he says. “So most scientists thought there must be some mistake.”

Scientists were right to be suspicious. The migration time for an Earth-sized planet is about 100,000 years, far shorted than the time needed to build the planet. For the more massive Jupiter, the problem is even more severe, implying that migration should kill any planet forming in the disc.

The discovery of the first planets outside the solar system shut down this debate. In 1995, the first exoplanet orbiting a regular star was discovered. It was the size of Jupiter, but so close to its stellar parent that its orbit took a mere 4.2 days. Since the original gas disc would not have had enough material at close distances to birth such a massive planet, this hot Jupiter must have formed further out and moved inwards.

With migration accepted as a real process, the task became how to stop it.

“This is still a very difficult problem!” Hidekazu exclaims.

Since migration involves the interaction with the gas disc, it will stop once the sun’s heat has evaporated the last of the gas. But this process cannot have happen too early, or giant planets like Jupiter would not have been able to gain their massive atmospheres.

One possibility Hidekazu has proposed is that there could be a secondary force to stop the planet due to the different temperatures in the gas disc.

As the planet’s gravity drags on the disc, it pulls nearby gas towards it. On a larger orbit and therefore lagging behind the planet, the cold outer gas is dragged in to pile-up in front of the planet like slow-moving traffic. Its mass pulls the planet forward, causing it to move at a faster speed. This acceleration increases the planet’s centripetal force which means it must move outwards to balance the gravitational pull of the sun; an outward push could stop or slow the planet’s deathly migration.

This is just one idea that might turn the tables on the deathly walk of our young solar system. One problem with fully understanding this process is the lack of data. It has only been in the last 20 years that we have discovered any planets outside our solar system and we are still working on observing complete systems around other stars. When we do, Hidekazu’s research group will have much more information with which to match their models.

Meanwhile, we can be grateful that such a catastrophe only occurs during the early planet formation process and by this method or another, the Earth got lucky.