Spotlight on Research #17: The Shape of the Galaxy

This week, postdoctoral researcher, Dr Alexander Pettitt, tells us about his research exploring the shape of our own Galaxy, the Milky Way. Alex is from the UK and joined the Department of Physics last October. Thank you, Alex!

Galaxies are colossal collections of stars and interstellar gas, and some of the largest objects visible in the night’s sky. Many of these are flattened discs, and display a wide variety of different features when viewed face on. Some of the more striking examples are shown below. The far left galaxy, M51 shows a grand two armed structure. The centre galaxy is nearly featureless with no clear arm structure, and the right has a large central bar (the long thin central concentration of stars and gas).

Yet, rather embarrassingly, whilst we have many remarkable images of a veritable zoo of galaxies from across the Universe, we have surprisingly little knowledge of the appearance and structure of our own Galaxy (the Milky Way). We do not know with certainty for example, how many spiral arms there are; does it have 2, 4, or no clear structure? Is there an inner bar and if so does it rotate with the arms, or faster than them? Unfortunately we cannot simply take a picture from outside the Galaxy as we can with the galaxies above, even if we could travel at the speed of light it would take tens of thousands of years to get far away enough to get a good picture!

The main difficulty comes from that we are located inside the disc of our Galaxy. Just as we cannot know what the exterior of a building looks like if we are stuck inside it, we cannot get a good picture of what our own Galaxy looks like from the Earth’s position. To build a map of our Galaxy we rely on measuring the speeds of stars and gas, which we then convert to distances by making some assumptions of the structure. However, the uncertainty in these distances is high and despite a multitude of measurements we have no resounding consensus on the exact shape of our Galaxy.

There is, however, a way around this problem. Instead of trying to calculate distances, we can simply look at the speed of the material in the Galaxy. The movie below shows the underlying concept. By measuring the speed of material along the line of sight from where the Earth is located in the Galaxy, you built up a pseudo-map of the structure. In this example the grey disc is the structure you would see if the Galaxy were a featureless disc. If we then superimpose some arm features, where the amount of stars and gas is greater than that in the rest of the Galaxy, we see the arms clearly appear in our velocity map. Maps of this kind exist for our Galaxy, with those for hydrogen and carbon monoxide (shown below) gas displaying the best arm features.

Our investigation into the shape of the Galaxy hinged on this idea. We perform numerical simulations of disc galaxies that resemble the basic structure of the Galaxy, but changing the specific shapes, such as using two or four spiral arms. We then place ourselves inside the simulation and build velocity maps like the one on the right in the movie above. These maps are then compared to the actual map of the observed night sky. If a map is found that matches the observed data, then we can say with some confidence that the simulation is a good reproduction of the Milky Way, and the simulation can be used as a proxy for a top-down map of the Galaxy.

The resulting maps tended to show that models with only two arms provided a poor representation of the Milky Way’s structure, while four arms tended to provide a much better match. Another point of investigation was the driving mechanism behind the arms, namely do they move as waves or fixed structures that wind up and regenerate? Surprisingly we find that the standard wave-based spiral arms provide a poorer match to the structure of the Galaxy (left in the image below) compare to those that are fixed structures (right). An inner bar seems needed however to match the features seen at the centre of the Galaxy, and we were were not able to generate such a feature in the model on the right. In models where bars were included, they seemed to bed required to rotate much faster than the arms (2-3 times as fast). 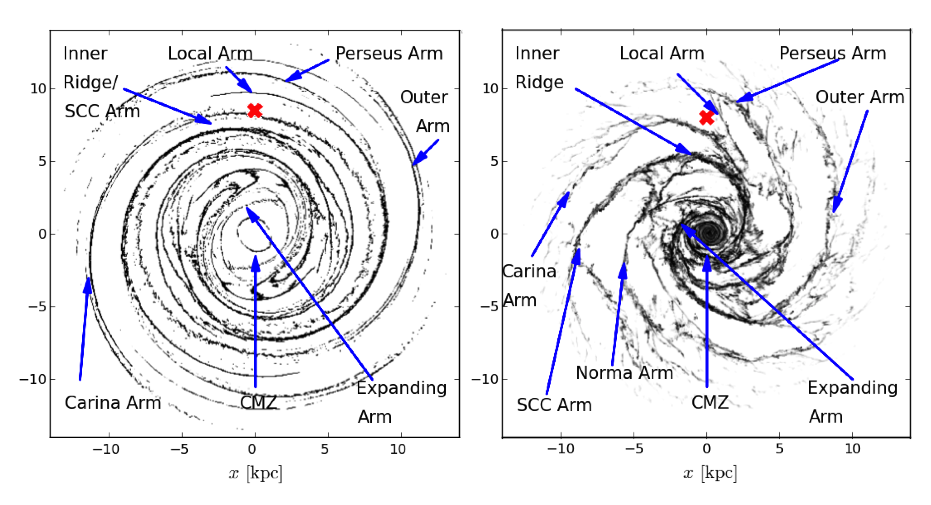 We tested a great many models in our work, with the model in the right of the image above producing the best match to observations. Quite how to generate a bar and sufficient arm structure simultaneously in such a model galaxy is a standing problem in the field. However, with ever more powerful computation facilities and greater knowledge gained from observations, we get ever closer to understanding what generates these beautiful spiralled galaxies.