Spotlight on Research #2: The trouble with bicycles 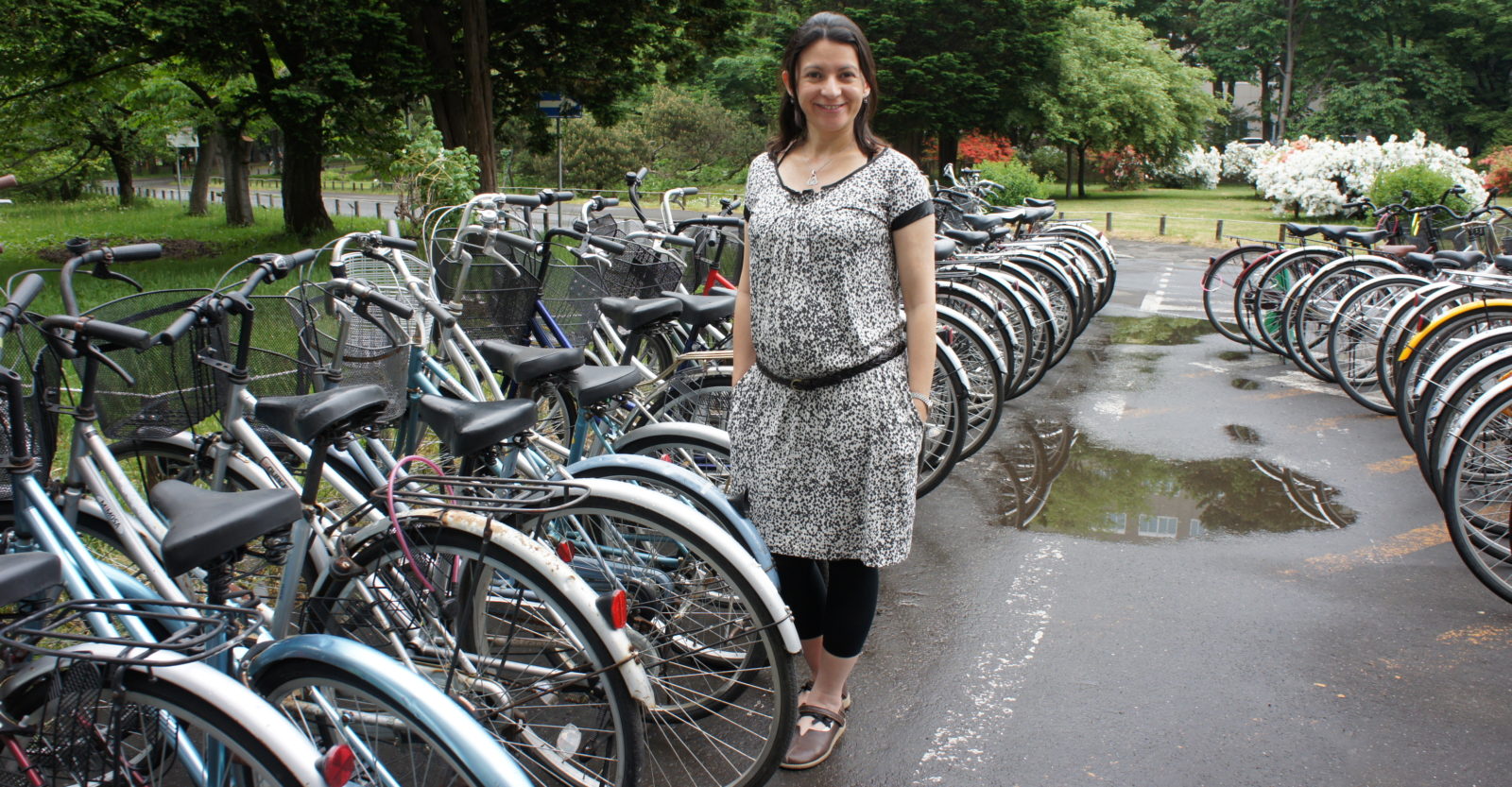 Walking through the Hokkaido University campus is a risky business. In winter, snow and ice lie ready to send the even slightly unbalanced into a horizontal slide. In the summer, you are likely to be crushed by a bicycle.

An astounding 19% of daily trips in Japan are made by bike. This is in comparison to less than 2% of trips in the UK. We live in a nation that loves the peddle-powered friend.

While such a mode of transport is great for the environment, it is rather less friendly for those on foot. Unlike in other countries where the bike is considered a road vehicle, here in Japan, it is commonly treated the same as pedestrians with both groups generally using the same sidewalks to travel. Not only is this problematic for pedestrians, it is also unsustainable, Assistant Professor Katia Andrade from the Department of Engineering explains.

“People use bikes because they feel secure,” Katia tells us. “They’re on the sidewalk which seems safe, but the accident rate is actually booming.”

In the last 20 years, the number of accidents involving bicycles and pedestrians has multiplied by over four times. Yet, this huge increase has been largely overlooked by the police because the incidents are typically small with few (although not zero) fatalities. However, as bicycle usage continues to increase, there will soon be no safe route for cyclists or pedestrians unless action is taken.

Action is not easy. Katia points out that a change to the way bicycles are handled in Sapporo requires expenditure of public money; always a limited asset. Additionally, implementing a system such as bicycle lanes is unlikely to be immediately effective, since people must feel confident in the available infrastructure before they will use it.

“If there is less infrastructure, less people will use it,” Katia elaborates. “But, even if you increase the infrastructure, people won’t immediately use it because they need time to feel secure.”

This means the task of safe cycling cannot be resolved by just laying down bike lanes all through the city; its too expensive and the uptake is too small. So how can a system be introduced that would have a high impact on safety for a reasonable investment? Katia’s research suggests that a key consideration might be land use.

Katia has been exploring the connection between the way land is physically used –for example by commercial buildings, school areas, residential housing blocks or industry– and the different modes of transport and resulting accidents.

To explain this connection, Katia offers a simple example of a large shopping mall being built in a suburban area. Prior to its construction, only a single bus route might have been needed to connect the surrounding houses and the centre of town. However, with more people now travelling to the mall, extra bus routes or a subway line might be required. The change in the land use has resulted in a change in the transportation.

Carry the same example another 5 years down the line and smaller shops have sprung up near the mall and the houses have expanded. This results in the number of people walking or cycling to the mall has now increased, coming into conflict with each other and the stream of motorised vehicles. The balance between the transportation modes has now changed and with it, the types of accidents occurring.

Such a correlation is often ignored in present day research. When an accident occurs, human factors such as drink driving or age are considered along with vehicle issues such as an old or faulty car. Yet, possibly such accidents could be avoided by better transport planning based on the given land use.

For instance, mixed land use where the distances between amenities such as shops, houses and work are small, are likely to be popular with cyclists. By anticipating this, city planners could keep this group safe by reducing the speed limit or providing cycle routes in this area. Investing in appropriate measures where there is a high demand will encourage cyclists to come off the crowded sidewalks and onto the safe, designated routes.

Reducing accidents by consideration of the commercial, residential and industrial composition is a key area in Katia’s current research. She explains though, that the results from her research will not be a worldwide ‘one size fits all’ due to the social nature of the problem.

Coming from Brazil, Katia understands bicycle usage between countries is very different. Here in Japan, it is common to see men cycling to work in their business suits and women in high heels off for a night’s dancing. In Brazil, both those activities would be reached using a car because it is associated with a higher social status. This social effect on her research makes the topic both vexing and fascinating. Nevertheless, at the end of the day, the goal is the same:

“We need to reduce the conflict between different modes of transport,” Katia concludes. “The less conflict, the less accidents.”