Spotlight on Research #20: Are universities teaching us wrong? 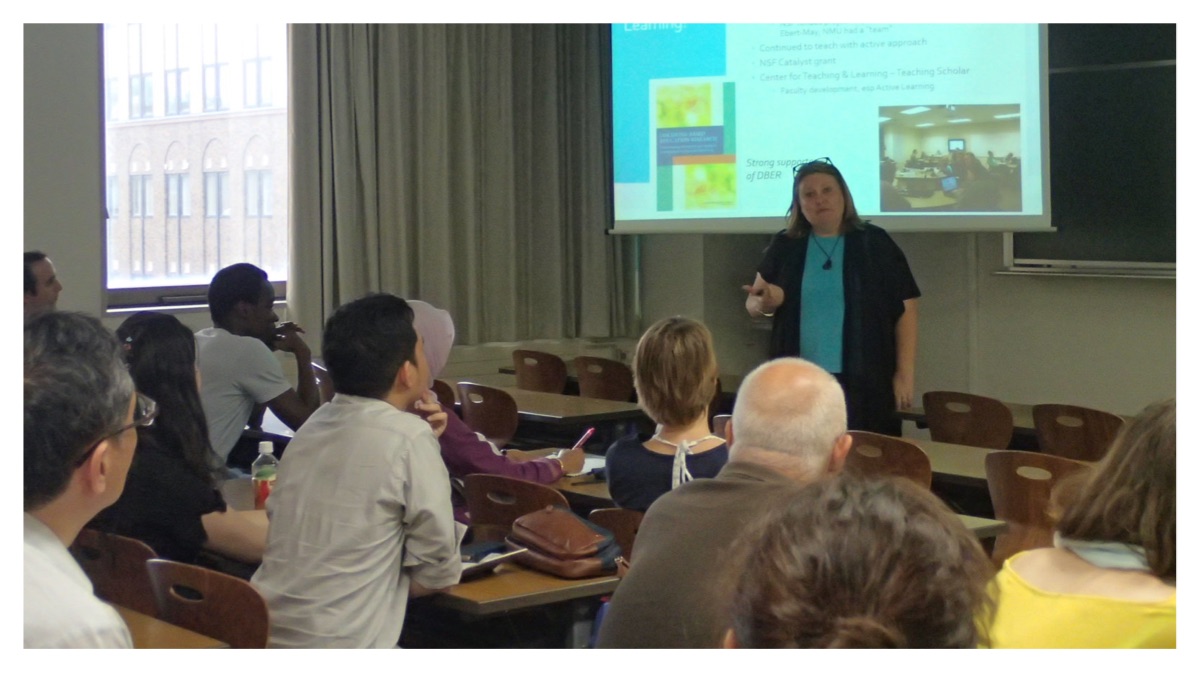 “When every 15 year old can access the world’s greatest libraries on their phone, what are universities for?”

It is a question Jill Leonard, a faculty member at Northern Michigan University in the USA, has spent a significant amount of time considering. Leonard’s research specialty is fish biology; a field that brought her to Hokkaido University as a postdoctoral researcher to study salmon in Lake Toya fifteen years ago. Nowadays, Leonard continues to collaborate with the Hokudai group, but her time is no longer just for research.

As with the majority of faculty positions around the world, teaching is now a major part of Leonard’s responsibilities. This can be a daunting prospect for newly minted assistant professors, since such permanent positions are usually awarded on the strength of a candidate’s research achievements, and their teaching experience can be minimal or non-existent. In Leonard’s case, her experience facing a class amounted to supervising a laboratory during her master’s course. However, Leonard believes that experience with traditional teaching styles is not necessarily helping today’s university students.

“A new graduate can expect to change careers five times,” Leonard told her audience during a seminar organised by the Faculty of Science. “That’s not just their job, but their career. So those amino acids I made them learn? Useless! They’re now designing motorbikes.”

Leonard argues that with raw facts a click away on our smart phones, and multiple career changes on the horizon, universities need to arm their students with a different skill set. Courses need to be less about the actual information, but focus on using and comprehending the information at our fingertips.

“Why tell people to memorise amino acids? It’s all on their phone! Universities should have a different mission due to this change in information,” Leonard explains.

So how do you go about teaching how to use, rather than memorise, information? Leonard displayed a graph on the lecture room screen. The horizontal axis showed the test score of students prior to any instruction. The vertical axis showed the amount they had improved after they had taken a course. The scattered points showed data for students participating in a traditional class and those participating in something called ‘active learning’.

“What does this plot tell us?” Leonard asked. “Turn to your neighbour and discuss it.”

After a few minutes she asked for our comments. We all agreed that those students who took the active learning class had improved by the greatest amount.

The concept behind active learning is for the students to participate in the class. Rather than sitting passively and listening to a lecturer, students discuss and perform activities in small groups. In our situation, anyone who had not understood how to interpret the graph (a surprisingly common problem, even at university level) would have had it explained to them during the discussion. If no one had understood, we would have had more confidence to approach the instructor for guidance as a team. This is opposed to simply hoping the problem does not come up on the exam.

Such active learning is a technique whose success has been proven repeatedly over the last decade. The data on Leonard’s graph dated back to a 1998 study conducted by American physics professor, Richard Hake. The success is in fact so well proven, that it is no longer possible to get research funding to test its effectiveness: active learning can beat traditional learning and that is a fact.

So why are active learning classes so rare?

The blockade is due to negative perceptions from both faculty and students. Faculty are concerned that creating active learning lectures will be a higher work burden in their already over-packed week. They also lack confidence to construct such a course, having attended only traditional lectures themselves. Then there is concern that students will refuse to participate in the exercises and the course will fail.

On the student side, active learning courses may be very different from their expectations of a university class. This leads to skepticism regarding their effectiveness. With university expenses ever on the increase, students do not want to take risks with their studies.

At Leonard’s university these fears have been offset by a clear strategy for introducing active learning courses. Lecturers are selected who have previous experience with teaching, but are still relatively junior. These individuals are named ‘catalysts’ by the university.

“In chemistry, a catalyst is a molecule that increases a reaction rate but is not consumed,” Leonard explains. “In active learning, a catalyst instructor aids the spread of these teaching methods without being harmed in the process. We liked the analogy!”

The university designed special rooms for the active learning classes. The tables were arranged in small groups or —for the larger lecture halls with tiered seating— with two rows per tier to allow students to turn around easily. Different equipment from white boards to cameras was provided for the instructors to increase their flexibility in the way they taught. The choices of different classes were recorded by the university.

“A tablet and a camera sit side-by-side for displaying notes on the screen,” Leonard described. “The math guys like using paper and so prefer the camera. The physics guys liked electricity and go with the tablet!”

It turned out everyone liked the whiteboards, which was a useful discovery since these are cheap to install in every classroom. In fact, Leonard said that a room itself should never be a barrier for active learning.

“Get people into groups,” she recommend. “Turn tables around, divide people up. Just get them not gazing at the lecturer. Any room will do.”

The catalyst lecturers also attended workshops on active learning and had meetings to connect with one another. The last part was particularly important for allowing lecturers to meet other people using the same methods. It provided support, the opportunity to share ideas and removed part of the perceived risk factor. For the student concerns, a key component was to explain why active learning was being used.

“You need to convince the students this is a good idea and they’re getting the most for their tuition fees,” Leonard said.

Once the catalysts had taught their courses, they went on to train new catalyst lecturers.

So what did the students think?

Leonard’s university found the overall response from both faculty and students was positive. However, the student views were split, with one group very much in favour of the active learning methods while the second strongly disliking it. For the negative group, their reasons fell into two camps: The first was a complaint that the active learning classes were more work. No longer sitting passively as in traditional lectures, the students had to work steadily during the semester rather than mugging up for a single exam. The second issue was a dislike of the active learning room itself. Both of these —Leonard emphasises— are reasons for explaining the active learning technique before the course begins.

Her university now offers both active learning and traditional lectures, with many courses offered in both formats in different semesters. The students frequently seek out the type they prefer, with many opting for the active learning option.

“The biggest initial concern from the faculty is the time it takes for the class exercises,” Leonard concludes. “But then they realise that the extra material being covered in the traditional lectures was not being learned by the students, so what was the point in teaching it?”

What do you think? Would you prefer interactive learning in your lectures? What activities do you think would help you learn?