Spotlight on Research #21: Why is life left-handed? 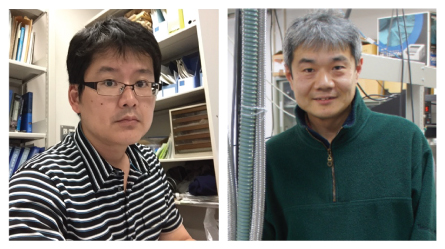 While most humans are right-handed, our proteins are made up of lefties. In the same way your left and right hands mirror one another, molecules can assemble in two reflected structures. Life prefers the left-handed version, which is puzzling since both mirrored types form equally in the laboratory. New research suggests the reason may stem from the creation of the first biological molecule, made before our sun was even born.

In 2004, NASA’s Stardust spacecraft swept through the nebulous halo surrounding a comet. What it found was the simplest of life’s building blocks, the amino acid glycine. Comets are frozen remnants from the earliest days in our Solar System. Their material is therefore not made in planets, but likely originates in the natal gas cloud that formed our sun.

In the Institute of Low Temperature Science, Assistant Professor Yasuhiro Oba and Professor Naoki Watanabe have been recreating the freezing conditions inside such a star-forming cloud. They believe that on the surface of dust grains suspended in this chilly gas, glycine may have undergone a change that made it left-handed.

At the core of the glycine molecule is a carbon atom with four bonds. If two of these bonds attach to hydrogen atoms, then the molecule is symmetric and neither right nor left handed. However, swap a hydrogen for another atom and this symmetry is broken. The molecule can then form two mirrored versions giving it handedness or ‘chirality’.

Yasuhiro and Naoki’s experiments suggest that a glycine hydrogen atom could be displaced by an atom of deuterium. Deuterium is a heavier version of hydrogen that contains an extra neutron in its nucleus, doubling its weight. It is abundant inside star-forming clouds, which are observed to contain many deuterium-enriched species, including heavy water. Once a deuterium atom has replaced a hydrogen, it is very hard to dislodge. The fraction of chiral glycine therefore steadily increases, until the main species of glycine inside the cloud shows left or right handedness.

Chiral glycine is very similar to the original glycine, but with an important extra property. Laboratory experiments have shown that chiral glycine is a catalyst for other chiral molecules. That is, it promotes the production of other species with the same handedness as itself. The result is that if glycine became a left-handed molecule, then future biological molecules would also be predominantly left-handed. When life developed on Earth, it would therefore build from a pool of left-handed molecules, giving it the bias we observe today.

“I believe chiral glycine has the potential to give us left-handed life,” Yasuhiro says.

This discovery potentially resolves another issue. While glycine is expected to be abundant inside star-forming clouds, it has never been observed. However, searches have been looking for the symmetric version of glycine, not its handed twin. If most of the glycine was left-handed, then it would have been missed.

It is an exciting idea, but many questions still remain. In the laboratory, the scientists can tell deuterium has replaced hydrogen to form chiral glycine, but the quantities are too small to see which mirrored version has formed. It could be that the dust grain structure favours left or right handedness. Alternatively, both types could form but one might be more easily destroyed. The answer to this would tell us if life beyond our own Solar System is expected to share our left-handed bias.

“Nobody cared about the production of a chiral molecule in a cold cloud before now,” Naoki elaborates. “But we opened the door to this possibility.”

Click the pic to go to the Hokkaido University press release: 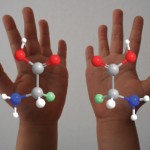 This work was also covered in Cosmos Magazine