Spotlight on Research #23: The most famous composer you have never heard of 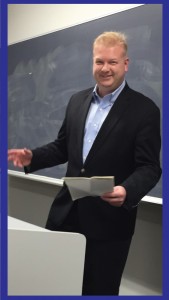 Alexander Serov —Paul du Quenoy explained— is the most famous composer you have never heard of.

Born in Russia on 11 January 1820, Serov was a composer and music critic. However, you can be forgiven for not knowing this; Even in his home country, Serov’s music is now never played. If you have heard of the name ‘Serov’ at all, it is more likely due to his son, Valentin Serov, whose considerably more famous paintings marked the start of Russian impressionism. So inconsequential does Serov’s life first appear, that Paul feared the response to studies on the composer would amount to ‘So what?’ — a genuine comment he had once received on another manuscript.

Yet Paul believes Serov’s life marks out a key period in Russian history and his connection with Serov’s story is a personal one.

Paul is an associate professor at the American University of Beirut in Lebanon. He is a frequent visitor to Hokudai, collaborating with the Slavic-Eurasian Research Centre. During his talk on Serov this month, Paul explains how Serov’s long forgotten story became woven with his own.

During Paul’s first year in Beirut, he received a note from one of the administration staff, “Mr Seroff called. He would like to talk to you. Here’s his number.”

At first, Paul did not make the connection. ‘Seroff’ or its alternative spelling, ’Serov’, is a relatively common surname. However, this particular Seroff was Gregoire Seroff, the great-grandson of Alexander Serov. Now in his 80s, Gregoire Seroff wanted to meet the academic who specialised in his great-grandfather’s era in Russia. It was the beginning of a friendship that continues to this day. 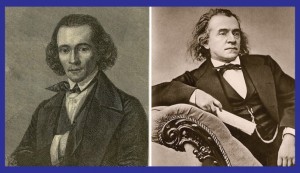 Serov died in 1871 at the age of 51, a moderately respectable lifetime for the era. The changes in Russia over that half-century are encapsulated in the two portraits of Serov at both ends of his adult life. The first is an 1846 painting when Serov was in his early twenties. It shows a Napoleon or Beethoven romantic-era style of dress, befitting a man from a wealthy family born into a country where 1.5% of the people legally owned 90% of the remaining population. There was no electricity, no steam power, no railways and the ruling Tsar was a strong candidate for the most powerful man in the world. The second image is a photograph taken in 1870. Serov now lounges in a waistcoated suit with a bow tie, the chain of a pocket watch can be seen and Serov’s expression is one of disinterest. This is a modern man, living in a world where personal freedom is guaranteed and is ruled under a government. In short, the arc of Serov’s life marks the beginning of Russia’s age of modernity.

It is this era of change that fascinates Paul, and Serov’s life is the keyhole that lets him peer in on the ground floor. His talks with Gregoire Seroff have led to a book on Serov’s life, entitled “Alexander Serov and the Birth of the Russian Modern”, to be published this year. It will update the only current biographies in existence, which are mainly around a century old and written in Russian.

The reason for Serov’s previous obscurity is two fold: Firstly, he destroyed much of his early work himself. Secondly, he was a difficult individual.

An indication that life was changing around the young Serov was that he was expected to work. Gone were the days when wealthy families could live off their estates and at the age of 15, Serov was sent to law school. He hated it. The rote memorisation and dry lectures of law left Serov cold. However, rather surprisingly, the law school also had a mandatory music program.

Paul explained that these additional activities were further proof of Russia’s split personality as it wrestled between Renaissance ideals and a modernising society. A music program came from the traditional, pre-modern assumption that such studies led to a balanced mind.

While more interested in music than his legal studies, Serov graduated law school after five years with a high grade. His heart was clearly not in his work and he moved through jobs at a break-neck pace, holding five different posts in five years. Finally, he was sent out of St Petersburg to head the criminal court in the Crimea. Far away from the music hub of the Russian Empire’s capital, Serov was far from happy. He began a long term relationship with a married woman estranged from her husband and in 1850, quit his job to become a composer and a critic.

Unfortunately, Serov had no belief in his own abilities. Without formal music training he suffered a crisis in confidence, destroying much of his own work. With little in his portfolio, Serov instead focussed on being a music critic. This made almost every composer in Russia extremely angry.

Acerbic and obnoxious, Serov antagonised just about everyone important in Russian cultural life. Unfortunately for him, Serov died well before most of those he had insulted. This gave the injured parties thirty to forty years to talk Serov into obscurity.

Regardless of how satisfying this ultimately must have been, Serov did manage his moment of fame before he died. In 1863 and 1865, he completed two operas, managed to resist destroying them, and was propelled into the limelight. Even his critics appreciated the works and Serov became Russia’s leading composer.

The first of these works is based on the biblical-era story of Judith. The tale takes place in the Hebrew town of Bethulia, which is beset by the Assyrian tyrant, Holofernes. To save her home, Judith convinces Holofernes that she is in love with him. When his guard is down and Holofernes has drunk himself into a stupor, Judith cuts off his head. While there is nothing not to love about such a righteous and blood-thirsty tale, scholars have warred over another question: “How Russian is it?”

Rather than containing Russian people or Russian culture, Serov’s Judith told a story from Eastern lands. Serov had certainly been influenced by his time in the Crimea, but his inclusion of these experiences in his opera marked another change in Russia’s history. Paul argues that this shows a move towards a distinct Russian personality. One that encompasses the orient cultures of the extended Russian Empire as well as influence from Europe.

At 43 and success finally in the bag, Serov left his illicit romantic affair and married the 17 year old piano student, Valentina Bergman, who gave birth to a son. While scandalous by today’s standards, the situation is mitigated by the prevailing view that one had to be settled before marriage. Prior to the success of his operas, Serov was far from financially secure.

For those who feel such fame was poor justice for a man who roundly abused his musical peers, consolation is in Serov’s autobiography. He wrote of his expected continual success over the upcoming decades, only to drop dead a few months later. Nearly 150 years after his death, however, Serov’s story is being revived to tell the tale of a nation. No doubt he would have found that appropriate.